mHealth Monthly Mashup: Release 17.0 – mobile health insights for pharma from both sides of the pond

In Michael Spitz’s first monthly mashup of 2013, he explores data on the use of mobile devices by healthcare professionals in the United States and in Europe.

“We’re no longer interested in mere impressions and conversions,” say the metrics and analytics gurus who now don fancy consultant tiaras. “It’s all about engagement!”

Great. After it took ten years for marketers to realize you could measure everything online, and another decade to know what to do with the mountains of data, along comes an added dimension where counting eyeballs and asses isn’t enough. Instead of studying how users see things and act on them, the relevant digital quant these days is multivariate, all about connecting and talking back to a brand over time, through multiple touch points and devices, via micro-targeted segmentation and user generated content.

“Transactional experiences” have become the “zero-point of sale”, a continuous dialogue conducted in our TransMedia Universe of simultaneous second, third, and fourth screens, everyone getting pixilated as we rush headlong into the imminent technological singularity of Ray Kurzweil. Sounds good to me, although personally I’ve had enough trouble launching a functional and compliant website or app, let alone creating the simulacrum of a human brain inside a super computer.

Perhaps what’s lost in all this philosophizing is the nuts and bolts of how people actually use technology now. That’s a shame, because pharma for one needs to know how physicians actually communicate and share in order to best serve their needs and help them treat. So let’s take a look at some interesting and relevant data, and extract some simple and hopefully prescriptive mobile health best practices for pharma.

Tossing smartphones across the pond: US vs EU mobile health

A recent focus group report by EPG Health Media shed some interesting light on the healthcare professional use of mobile devices in the United States and Europe. Check out the abstract of the comparative study between several hundred American and European physicians in 2010 and 2012, which concludes, among other things, that:

• Smartphone ownership, time spent on them at work, number of apps downloaded, and time spent using them with patients are all higher in the US than in Europe

• Tablet ownership (dominated by the iPad) is also higher in the States, but time spent using them at work and with patients is roughly the same

Much has been made in the press about the apparent disparity between US and EU physician adoption of use of these devices, but what I find far more compelling are the similarities. Despite a larger proportion of US physicians owning and using mobile devices for numerous reasons, the study nonetheless reveals that:

• Although app downloads are higher in the US, physicians from both continents download far more apps than they actually use

• Physicians on both continents want “credible” apps, but cost is a significantly mitigating factor

• Both EU and US physicians more likely to source app information via search engines than directly through more credible sources, such as pharma companies

• A minority of these physicians use their devices during consultations, but a majority agree they help them practice more effectively

• Despite overall device usage increasing since 2010, perceived benefits have not changed significantly

So let’s dive into the study and select a few statistical gems that can help pharma marketers on both sides of the Atlantic better build and distribute mobile health tools and resources: 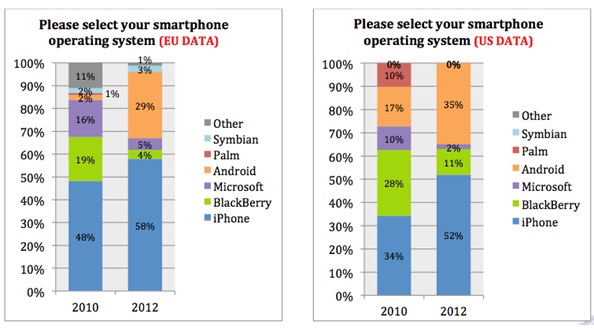 Figure 1: Apple and Android are the mhealth Coke and Pepsi

This year has not been kind for Blackberry, trends pointing to an RIP for RIM, especially for mobile health, overwhelmingly dominated by Apple and Google. And far as tablets go, the iPad blazed the trail and continues to charge ahead, making the iOS operating system the preferred choice for most enterprise-level pharma initiatives (see figure 1A).

Evidence suggests physicians are increasingly going mobile for prescribing support and management, using browsers and apps from their smartphones and tablets. Clearly the need is there, behooving pharma to integrate e-prescribing technology wherever possible. Integration challenges with entrenched systems abound, but currently utilization is already high enough to warrant a strong mobile push, point of care devices lending themselves perfectly to the task.

Another significant opportunity for pharma is providing sophisticated and innovative mobile health resources as a value-added service to physicians who, based on this data, generally prefer not to pay for their apps. Whether in branded or unbranded form, physicians will be more likely to download and utilize free apps that nonetheless perform increasingly sophisticated functions. 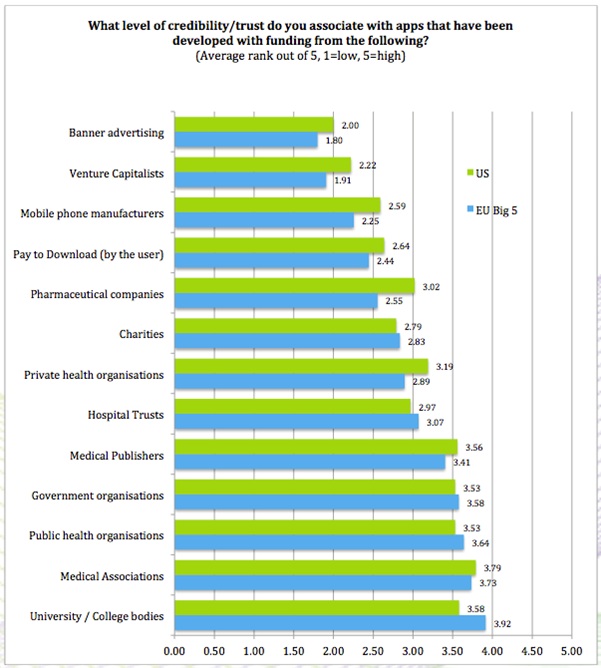 Not surprisingly, US and EU physicians trust schools, associations, publishers, and governments more than advertisers, entrepreneurs, and pharmaceutical companies. Pharma can therefore raise its own bar by increasing transparency and perhaps partnering up on mhealth initiatives with content providers doctors find innately credible.

“…pharma can transform an emerging channel into a vibrant and viable communication stream.” 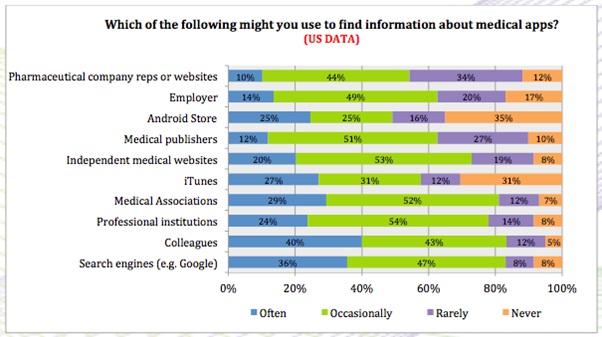 The truism “build it and they will come” is a distant memory for marketers, and a total strike out for pharma, especially in mobile health. As can be seen from this revealing chart, physicians prefer connecting with their medical apps through iTunes and generic web searches to pharma websites and even rep visits. Pharma should therefore better market and distribute their apps, especially through proven channels and personal touch points already utilized for branded messaging and information.

Digital strategy and analytics can be complicated, but effective marketing ultimately rests in understanding the simple behaviors of your audience. Although EU physicians slightly trail their US counterparts in smartphone and tablet adoption and use, important similarities in their behaviors suggest several immediate opportunities for growth. By choosing the right technology, functionality, and distribution approach, pharma can transform an emerging channel into a vibrant and viable communication stream with their most important audience — the physicians who are already using mobile devices to diagnose and treat their equally wired patients.

Michael Spitz is SVP, Managing Director of the Healthcare and LifeSciences division of ZEMOGA. Spitz combines his passion for technology with more than 15 years of clinical content expertise to help engineer digital healthcare solutions. Follow @SpitzStrategy on Twitter for his daily – often hourly – updates on all things digital for the ultimate benefit of patients worldwide.

Do you have recommendations for making mhealth more effective?