Ray Lambert looks at the potential of humanized FcRn mice for evaluating the pharmacokinetics of mAbs.

Due to their extraordinary specificity and pharmacokinetic (PK) behavior, human immunoglobulin gamma monoclonal antibodies (hIgG mAbs) are a most promising biological therapy for treating an expanding number of human diseases. However, before they can be FDA-approved, therapeutic hIgG mAbs must be evaluated in preclinical trials using non-human animal models. Although primates are the closest non-human surrogates for evaluating the PKs of therapeutic mAbs, they are expensive and encumbered by ethical constraints. Unfortunately, conventional rodent models do not reliably predict the PK behavior of hIgG mAbs in humans. The major reason for this non-concordance is species-specific differences in the affinity of the receptor responsible for controlling the PK of IgGs – the “Fc receptor, IgG, alpha chain transporter” (FCGRT, common name FcRn). Humanized FcRn mice – mice deficient for mouse FcRn (mFcRn) but transgenic for human FcRn (hFcRn) – circumvent this limitation. Analyses of humanized FcRn mice are increasingly documenting their predictive value in modeling the PK behavior and efficacy of therapeutic hIgG mAbs in humans.

“Unfortunately, conventional rodent models do not reliably predict the PK behavior of hIgG mAbs in humans.”

The MHC class I-like molecule FcRn is an intracellular trafficking receptor with diverse and critical immune system functions.1-3 It is unique in being able to extend the half-life (a measure of PK behavior) of IgGs in the circulation and extravascular sites. It does so by binding to the IgG-Fc protein domain. This binding is a low pH-dependent process and occurs in the acid environment of early epithelial cell endosomes. Thus bound, IgGs are protected from lysosomal degradation and can be recycled to the extracellular environment, increasing their bioavailability (Figure 1). Because of its critical role in controlling the PK of IgGs, FcRn has been exploited to design therapeutic mAbs and related biologics. 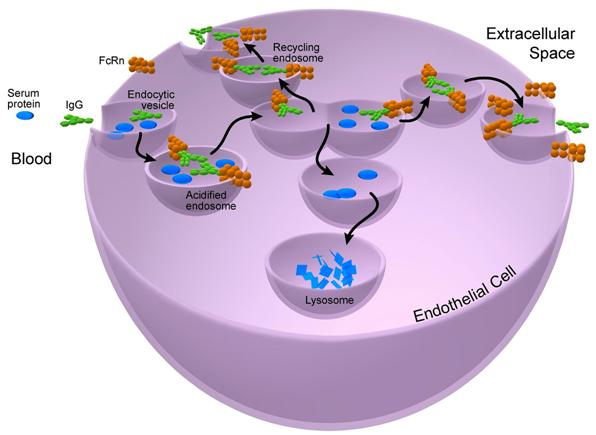 IgGs and other soluble proteins in extracellular fluids are endocytosed into acidic endosomes by vascular endothelial cells. FcRn, an integral endosome membrane protein, binds to IgGs and recycles them either into the circulation or the extracellular space (both pH neutral), where they are released. The other proteins are channeled to the lysosomes and degraded.

FcRn from one species may or may not bind to / protect IgGs from another. For example, mouse IgGs (mIgGs) don’t bind to hFcRn, but both mIgGs and hIgGs bind to mFcRn. In fact, hIgGs have a very high affinity for mFcRn. As a result, their half-lives in conventional mice are unrealistically long. Because humanized FcRn mice express only hFcRn, they can be used to more reliably assess the therapeutic efficacy of candidate hIgG mAbs.

• Each FcRn strain has a C57BL/6J genetic background, reducing the biological noise caused by the genetic variation of mixed backgrounds.

• The FCRN transgenes affect the PK behavior of hIgG mAbs in a copy number-dependent manner: two copies (instead of one) increase the serum half-lives.5,6

A major asset of hIgG mAbs as therapeutic agents is that their serum half-life is 10-20 days – about 10 times longer than other immunoglobulin isotypes.6 Their serum half-life increases in direct proportion to their affinity for FcRn, suggesting that their therapeutic efficacy would be improved by increasing this affinity. Zalevsky and his colleagues7 tested this hypothesis. They produced variants of bevacizumab (Avastin), a humanized anti-vascular endothelial growth factor (VEGF) IgG1 antibody used to treat colorectal, lung, breast, and renal cancers. They found that the hFcRn affinities of these variants (determined in vitro) are 3 to 20 times higher than those of the original Avastin. Additionally, the PKs of the Avastin variants in conventional mice fail to correlate with their affinities. In contrast, similar analyses in cDNA FCRN transgenic B6.Cg-Fcgrttm1Dcr Tg(CAG-FCGRT)276Dcr/DcrJ mice and cynomolgus monkeys demonstrate concordant and greatly extended PK profiles that correlate well with the affinity studies. Most importantly, the ability of the long-lived variants to suppress engrafted human tumors in Rag1-deficient cDNA FCRN transgenic B6.Cg-Rag1tm1Mom Fcgrttm1Dcr Tg(CAG-FCGRT)276Dcr/DcrJ mice increases significantly. These results demonstrate that humanized FcRn mice can be extremely powerful tools for the preclinical development and evaluation of hIgG mAb cancer therapies.

Christianson and his colleagues9 developed a panel of mAbs directed against hFcRn. These mAbs can be used to quality-control FCRN transgene expression and investigate the expression of hFcRn in FCRN transgenic mice and humans. They also provide incisive tools for probing the biology of hFcRn.

Several studies have shown that FcRn-deficient mice are resistant to autoimmune disorders, particularly those with excessive serum concentrations of pathogenic IgG autoantibodies. The basis for this resistance can be at least partially explained by the fact that FcRn deficiency reduces the concentrations of serum IgGs, including pathogenic IgGs that promote autoimmune disease. Additionally, FcRn’s ability to affect the antigen presentation of IgG-containing immune complexes to T cells is being increasingly recognized.10 Therefore, by either or both mechanisms, FcRn may be a therapeutic target for treating autoimmune diseases.

In summary, humanized FcRn mice can be applied to a wide variety of biomedical research contexts, including preclinical development and evaluation of therapeutic mAbs and related biologics, vaccine development, autoimmune disease treatments, and albumin-based therapies.

Ray Lambert is the technical writer for JAX® Mice &amp, Services at The Jackson Laboratory, Bar Harbor, ME. Humanized FcRn mice are available from The Jackson Laboratory. For more information, including purchasing, licensing, and use restrictions, see the JAX Mice Database (www.jaxmice.org) or contact JAX® Mice &amp, Services at 1-800-422-6423 or +1-207-288-5845.

What potential do humanized FcRn Mice have for monoclonal antibodies?