The work of the UK’s HTA body, the National Institute for Health and Care Excellence (NICE), is often heatedly debated, and this time it’s for holding back a clinical guideline. Leela Barham looks into the controversy.

NICE began their work to update a 2007 clinical guideline on Myalgic encephalomyelitis/chronic fatigue syndrome (ME/CFS) in January 2018. ME/CFS is a complex illness and the US Centers for Disease Control and Prevention describe how some people with ME/CFS can be confined to bed and that ME/CFS can get worse after any activity, physical or mental. It’s been estimated that 240,000 people are affected by ME/CFS in the UK.

By November 2020, a draft guideline was published and as is usual practice, NICE sought feedback from stakeholders on the draft.

At the time NICE recognised that there was debate about the best approach to both diagnosing the condition as well as its management. NICE stressed how the draft recommendations reflected the reporting of harms by people with ME/CFS but also the experience of the committee too.

The draft NICE guideline was not met with universal approval, so much so, that NICE has had to delay the publication of the final guidance. Final guidance was originally expected in April 2021 but at the time of writing, it has not been published.

NICE has set out a summary of the issues that have been raised on their draft guideline. They include specific issues about ME/CFS including the diagnostic criteria recommended, that the draft guideline potentially creates risks for children and young people with ME/CFS, that no longer offering graded exercise therapy (GET) could lead to a reduction in services and that there are questions about the place of cognitive behavioural therapy (CBT) in individualised management.

There is also a big issue that goes beyond ME/CFS. NICE recognises that there have been questions raised about the approach taken to the evidence whilst the guideline was in development. Suggestions have been raised that studies have been inappropriately excluded or downgraded, including for GET and CBT. That must be uncomfortable for an agency that sets its stall on the evidence. Yet it is not necessary all a NICE issue: the evidence base itself is already hotly debated, for example, with discussion on the validity of findings from a trial that is unblinded as it how it should be graded.

Whilst not highlighted by NICE themselves, there have been concerns raised about the credibility of NICE and whether it can still be seen as producing evidence-based guidelines.

NICE is an umbrella organisation, relying on volunteers to sit on committees to make decisions on what to recommend, informed by the evidence which is identified, synthesised and presented by those with know-how on doing this, both staffers but also outside experts too.

In the case of the update to the 2007 clinical guideline, those volunteers on the committee have not been able to reach a consensus. That’s not particularly noteworthy, committee deliberations can and do sometimes have to go to a majority vote. But for the ME/CFS guideline the result has been a little more dramatic: four members of the guideline development committee left the group in the weeks before the final guideline was due to be published. According to the BMJ, three resigned and one was removed by NICE.

Doctors with ME (DwME) put out a statement in July 2021 supporting the change in treatment recommendations in the draft NICE guideline. They even went so far as to say it was a ‘watershed’ moment, allowing doctors and patients to develop more concordant and productive relationships. That contrasts markedly with the views from other clinicians who have expressed disappointment that GET is being removed as an option and that CBT is for supportive use. Accusations have been made that NICE has been driven more by political pressure than science.

#MEAction, a global network of advocates and other groups representing those with ME, suggest that it appears that the pause at NICE is a result of threatened refusal to implement the guideline by two Royal Medical Colleges as well as NHS England. Some clinicians have suggested that it is a vested interest to maintain services that are at play. Protectionism is the cry of some.

The real value of NICE guidelines is in their implementation

At 3.15 pm on 17 August 2021, NICE announced that it had paused the publication of the final guideline. It was expected to be published the very next day. NICE said that it had to take more time to consider the next steps so that the guideline is supported. They stress that for the guideline to have the desired impact, recommendations must be supported by those who will implement them.

This implicitly recognises that the value of NICE’s guidelines will only be realised when they are followed: there’s no value in doing the work if nothing changes. And #MEAction estimates that over a million pounds of public money have been spent already.

The incentives to follow NICE clinical guidelines are a little unclear. Unlike Technology Appraisals (TAs) there’s no funding directive but this is a case where the recommendations are to do less, not more. Yet at the same time, the argument goes that the new guideline will be followed and that’s the issue for some clinicians: that GET and CBT when it does add clinical value won’t be offered to patients. The issue is therefore circular: NICE won’t publish because they don’t believe it will be implemented, some clinicians don’t want it to be published because they believe it will be implemented.

But perhaps it also signals a degree of panic within NICE. The decision to pause is perhaps understandable, but to do so the day before the final guidance was due to come out suggests leaving that tricky decision too late. (And I am no lawyer, but it does appear that NICE has the legal right to publish a recommendation “in such form and manner and at such time as NICE considers appropriate” which differs to quality standards where commissioners can, in effect, veto publication).

The NICE decision has also led to yet more time and effort on the part of patients on the guideline. In addition to their input in guideline development, #MEAction also organised a petition. MEAction delivered that petition to NICE – signed by 21,500 people – calling on NICE to publish the final guideline in its current form on the 12 October 2021. 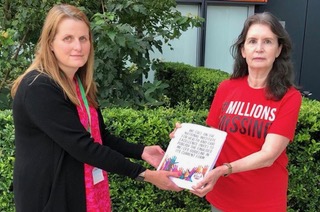 NICE is holding a stakeholder workshop on 18 October 2021 with an independent chair. This is likely to be a difficult meeting (oh to be a fly on the wall!). It remains to be seen if this will generate consensus.

The challenge NICE has is that someone has to take a final decision, and like it or not, it should be them. Delay can only go on for so long, not least because of concerns to harm to those with ME/CFS and the wider implications: the number of people who are likely to experience chronic fatigue is on the rise with long-COVID. Difficult decisions have been NICE’s forte, and NICE needs to take this difficult decision sooner rather than later. But just as others have argued, it is also important to tackle the underlying issues with the evidence base so that the next update can avoid the issues of this one.

Translarna not approved by NICE for DMD on NHS