Governments in developed and developing countries are pushing for greater use of generic drugs, aiming to curb pharmaceutical expenditure in the National Health System. Greece had a highly developed pharmaceutical market, typified by low generic pervasion and the presence of many international drug makers.

Greece 10 years Ahead with Generic drugs

In 2010 McKinsey &amp, Company Consulting conducted a study, titled “Greece: 10 years ahead” in which it details the sectors that Greece ought to invest in order to have the opportunity to get back into the market, by providing competitive services and products. In the study a new growth model and specific strategies for the next decade were considered.

“Greece had a highly developed pharmaceutical market, typified by low generic pervasion and the presence of many international drug makers.”

The key factors in order to take advantage of this opportunity would be to improve the attractiveness and the market penetration increase of generic drugs, with the help of the Greek State which could develop a comprehensive generic drugs development strategy to inform the public and guarantee the safety of the drugs. At the same time, all involved parties, doctors, pharmacists, social security funds and patients, should be motivated to use generic drugs.

What has been done up until now? NOTHING!

The Greek pharmaceutical industry is considered to be a significant quality drugs and OTC producer, noting high numbers of exports to other countries. Moreover, it represents an important sector of the national economy and is a major employer in production, R&amp,D and distribution, both in wholesale and retail. Besides, we shouldn’t forget the fact that the Greek pharmaceutical industry holds fifth place in the country’s exporter list with transactions exceeding 835 € million. 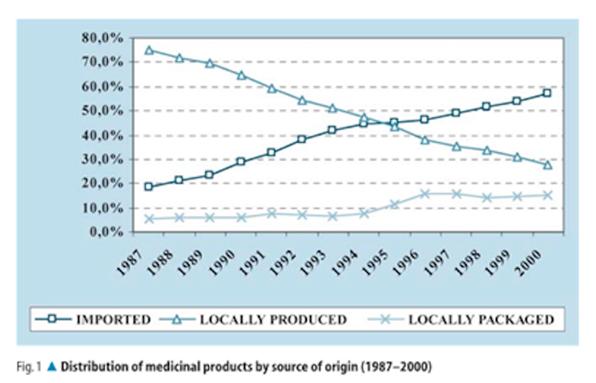 The paradox of the Greek medical community is that they do not prefer to prescribe generic drugs. In a study conducted by the National School of Public Health and specifically by the Department of Health Economics, it seems that Greek physicians have a positive opinion of generic drugs in terms of quality performance, safety and effectiveness, yet they prefer to prescribe the original drugs.

“Greek physicians have a positive opinion of generic drugs in terms of quality performance, safety and effectiveness, yet they prefer to prescribe the original drugs.”

Despite physicians’ positive view, nearly 70% of them prescribe the originals. With an inside view, findings suggest that Greek physicians could be willing to prescribe generic medicines, if a generic promotion strategic plan was introduced in the country. To develop such a plan, a set of supply and demand measures should be implemented along with provision of information on generics to the physicians during their education and clinical practice. 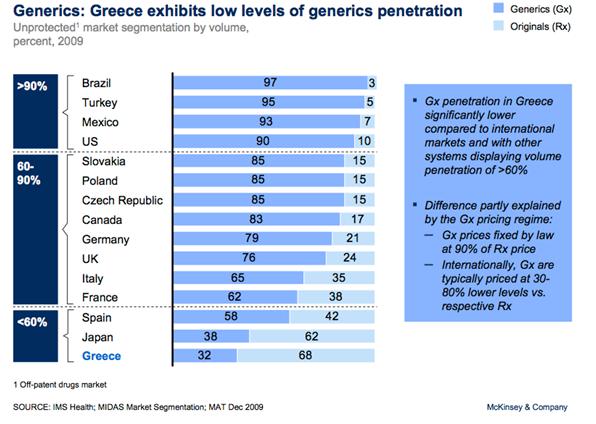 Greece faces another year of negative growth, following three years of economic decline. The country’s wider economic recession is having an unexpected and damaging impact on public health, forcing Greek Parliament to move on a package of pharma spending cuts. The most important measures are the mandatory prescriptions by international non-proprietary name, the extension of pharmacy opening hours and the imposition of limits on the spending of social security funds.

The role of generic drugs

Globally, except for the Greek pharma market, generic medicine plays an essential role in treating diseases by increasing the access to thousands of patients. At the moment, generic drugs account only for 18% of the market and patented products make up 82% of the sales.

This is confirmed by the IMS Institute for Healthcare Informatics, stating that global spending on drugs will reach almost $1.1 trillion by 2015, reflecting the slowdown in the annual growth rate to be between 3 to 6%. Compared to 6.2% in previous years, it is noticeable that the cut in spending is due to the increase in promotion and prescriptions of generic drugs.

“Greek physicians could be willing to prescribe generic medicines, if a generic promotion strategic plan was introduced in the country.”

Finally, in his presentation “Generic medicines: Essential contributors to the long term health of society“, Alan Sheppard mentions that there is only one single and simple solution for controlling and balancing the rising healthcare costs, and that is generic medicines.

It is that simple, however it appears to be complicated to the Greeks because of unrevealed conflict of interests.

Ioannis Ofakoglou is the project manager of Intermed Pharmaceuticals in Greece.

He is also the founder and director of Pharma Market Journal www.pmjournal.gr a blog covering healthcare startups, studies, news and articles from the wider pharmaceutical and healthcare field.

How can prescribers be encouraged to turn to generics?