As pharmaphorum continues to connect with those senior executives who are shaping the future of the pharmaceutical industry, Paul Tunnah speaks with the CEO of global biopharmaceutical company Celgene, Bob Hugin, to hear about the virtuous cycle of innovation.

Given the strong presence Celgene has established in oncology, it is hard to believe that the corporation has been around for barely more than a quarter of a century, starting life as an independent biotechnology company in 1986, before conducting an IPO the following year. Since then, it has established a reputation for not only innovative science, but also calculated risk-taking, perhaps best exemplified by bringing the older drug thalidomide back to the market in the 1990s as an effective anti-cancer agent, despite its chequered past.

The current Chief Executive Officer and Chairman, Robert Hugin, better known as Bob, has seen the company’s growth first-hand, since joining in 1999 as Chief Financial Officer. Now, after only three years in the top job, he has also been elected as Chairman of the Pharmaceutical Research and Manufacturers of America (PhRMA); a real endorsement of how respected Celgene’s work is by the broader pharma industry.

“If we’re not helping patients in a significant way, there is no business model”

For Hugin, he sees this appointment as an important opportunity to help communicate his broader passion for the industry’s work, while also recognising the dual challenges of having to adapt pharma’s business model and better communicate its work.

“If we’re not helping patients in a significant way, there is no business model”, Hugin states boldly, before going on to confirm that “pharma is a big part of the solution – we have the potential as an industry to make transformational changes to the lives of patients”. However, he also accepts that such transformational leaps can sometimes come from smaller steps, recognising the value of incremental innovation in difficult to tackle areas such as cancer and neurodegenerative disorders. But forward movement is critical – Hugin has no time for ‘me too’ products.

Indeed, a fundamental tenet of his strategy for Celgene has been the concept of the ‘virtuous cycle of innovation’, which he describes as “adopting a transformational, disruptive business model with the patient at the centre, by focusing on tremendous operating excellence with the existing portfolio, which allows reinvestment in areas of high potential, where science and unmet need overlap”. It might sound straightforward, but in reality goes way beyond just commercial and R&D process, and is underpinned by the very culture of the organisation.

Being brave is in Celgene’s DNA. “It’s not hard to set bold goals – you don’t need to meet many cancer patients to understand the urgency”, Hugin explains, before elaborating on how internally communicating the way in which this mission and vision also makes good business sense is equally important. Of course, striving for the best innovation carries its own risks and it is refreshing to hear someone from the senior leadership accept that not all failure is bad. “This is a risky business and failure is a key component of learning. No one wants to fail but the important thing is that when you do fail, you learn from it”, he explains.

Even with the right internal process and culture, Hugin acknowledges that pharma has an additional challenge in terms of gaining support from external stakeholders, which has been a key driver in him taking on the additional role at PhRMA:

“We have two major missions here. Firstly, to ensure that, in the near-term, policy-makers understand the immediate issues and drive good legislation then, secondly, to create the narrative with everyone else, starting with our own employees, so that everyone understands what we do and why it makes sense.”

Hugin therefore believes that if the pharma industry can do a better job of communicating the broader economic value of its medicines, then the nature of its conversations with governments and other stakeholders will change. “People would say ‘why are you not investing more?’, rather than simply challenging upfront costs or rationing products”, he predicts.

And it is a dialogue that is already taking place. During a recent trip to Japan as part of his work with PhRMA, Hugin presented the results from a recent study assessing the economic impact from use of five of the most widely reimbursed medicines in the country. The immediate costs were more than compensated for by a positive near-term health and social financial benefit to the order of 1.3 to 1.5 million Yen.1

When presented with such evidence, it is hard for governments to talk seriously about reducing the economic burden of disease without supporting prescribing of such novel medicines. Hugin reinforces this, adding that, in the US, “the Congressional Budget Office recently changed the scoring system to acknowledge that increased spend on pharma medicines offsets against decreased spend in other areas”. 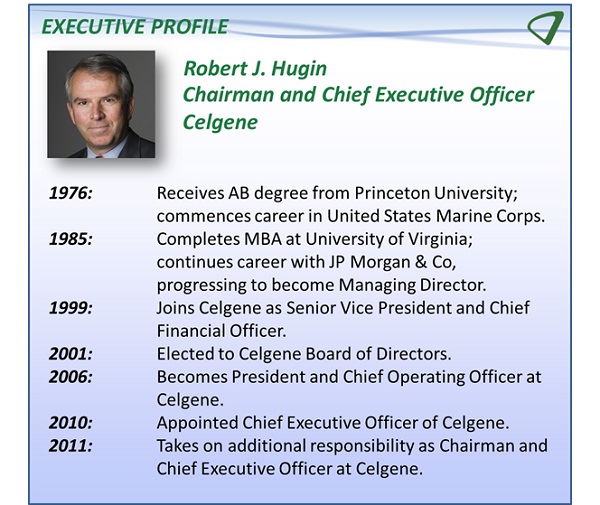 Hugin also believes that the cost of failing to invest in treating some of the chronic diseases that are spiralling uncontrollably is almost incalculable. “Neurodegenerative disorders and cancer have become the great plagues of our generation because of other medical advances. We have to recognise that change is needed; to have integrated solutions, across all stakeholders – and pharma must be part of that”, he explains. Critically, Hugin also thinks the current economic challenges have facilitated an environment that actually stimulates this kind of collaboration as “one of the few benefits of the fiscal crisis is that people recognise we can’t do it alone”.

Despite the problems being faced by global healthcare systems, the pharma industry and patients, Hugin is optimistic about the direction of travel and inspired by those he interacts with every day. “Our ability to maintain the entrepreneurial spirit, with every employee committed to make a real difference to patients is vital”, he explains, adding that they have achieved “tremendous alignment across the company – it is a fundamental part of the fabric of Celgene and generates great confidence”. Keeping his finger on the pulse, starting with the company’s own employees, is clearly important to him, as anyone who has attended one of his ‘breakfast with Bob’ sessions will attest.

So while progress in tackling difficult disease areas like cancer can seem slow on a day-to-day basis, Hugin is extremely optimistic about what has already been achieved and what is yet to come.

“We don’t have all the answers, so in every aspect of our business we have to be a great partner”

“We have already been fortunate to extend life for multiple myeloma patients and the pace of learning is accelerating. In less than 20 years we will have cures for many sets of patients, as we will make big, big advances due to the significant investment in proteomics to unravel the human genome.”

Ultimately, it is easy to get wrapped up in some of the negativity currently surrounding the pharma industry. Hugin is a man who has little time for this, instead seemingly focussed with laser-like precision on driving a positive culture of innovation that delivers value both commercially and for patients.

As he sums up, “if you are not courageous and bold about the future, and believe you can do great things, you will never achieve great things. We don’t have all the answers, so in every aspect of our business we have to be a great partner; to find win-win solutions. If we do that Celgene will be well rewarded and patients will be well looked after”.

1. Making Strides in War Against Cancer, Pharmaceutical Research and Manufacturers of America, May 2013: http://phrma.org/robert-hugin-remarks-japan-media-roundtable

Robert J Hugin has Chief Executive Officer of Celgene Corp. since June 2010 and its Chairman since June 2011. He was previously President and Chief Operating Officer from May 2006 to June 2010, and was elected by the Board of Directors to serve as a Director in December 2001. Hugin served as Senior Vice President and Chief Financial Officer from June 1999 to May 2006.

Previously, Hugin was a Managing Director at J.P. Morgan & Co. Inc., which he joined in 1985. He received an AB degree from Princeton University in 1976 and an MBA from the University of Virginia in 1985, having served as a United States Marine Corps infantry officer during the intervening period.

Hugin also serves on the Board of Directors of PhRMA, The Medicines Company, Atlantic Health System Inc. and Family Promise, a national non-profit network assisting homeless families, and is past Chairman of the HealthCare Institute of New Jersey.

How does pharma achieve a virtuous cycle of innovation?