Enablers of drug innovation could lie in the numbers

Christopher Ehinger of Black Swan Analysis addresses the problem of clinical-trial recruitment as a barrier to new drug development and offers a new way of looking at the problem.

Recent developments in the pharmaceutical industry are encouraging drug developers to re-think their strategies toward innovation and development. The expiration of blockbuster patents and the subsequent flood of cheaper generic drugs into the marketplace have created challenges for pharmaceutical companies to overcome. Hugely successful drugs that have supported the growth of large pharmaceutical companies for many years can no longer be relied upon and instead newer, more innovative drugs must be developed. This drive to innovate has been reflected by a 232% rise in the number of registered clinical studies between 2006 and 20111. While it is a positive that pharmaceutical drug companies are assuming a more prominent role in the search for new drugs and responding to the industriy challenges with optimism, it has led to the clinical research environment becoming more commercialized and competitive. 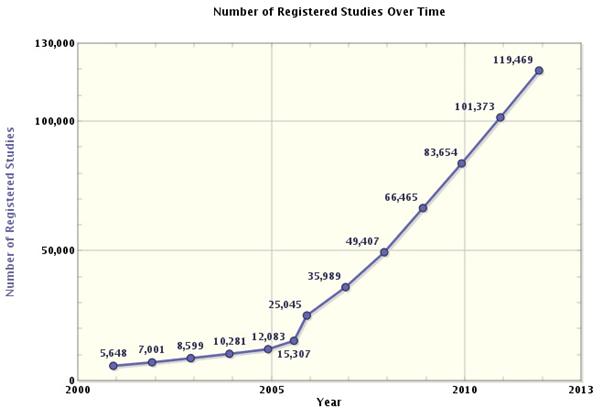 With pharmaceutical companies attempting to move more and more drugs through the pipeline, the level of R&amp,D investment has become staggeringly high. Currently the average cost of drug development by a major pharmaceutical company is at least $4 billion and has reached over $11 billion in certain cases2. Between 1997 and 2011, the twelve largest drug developers spent a massive $802 billion on R&amp,D2, the equivalent of bailing out Greece, Ireland, Portugal and Spain during the Euro Crisis and having approximately $180 billon left over3. While this level of investment might be necessary to generate the data needed to get a drug from the research phases into market, it has caused the demand for clinical trial patients to skyrocket and left clinical trial centres failing to reach their recruitment enrolment numbers.

“This drive to innovate has been reflected by a 232% rise in the number of registered clinical studies between 2006 and 2011.”

A recent report on the state of the clinical trials industry estimates that 80% of clinical trials are delayed by at least one month because of unfulfilled enrolment numbers, and that patient recruitment delays account for, on average, 4.6 months lost per trial4,5. A delay of this scale has been estimated to cost at least $1.1 billion to the trial sponsor5. Whilst there are other aspects to the clinical research process that are also slowing down drug innovation, such as stricter regulatory standards and higher efficacy rate expectations, patient recruitment failures is, without doubt, a leading factor towards the transformation of clinical trials into one of the greatest obstacles to new innovative drug development.

The good news is that, unlike regulatory and efficacy standards, drug developers can improve their patient recruitment successes and speed up the research phases of a drug. A better understanding of one’s patient population is widely recognised as valuable information to have when identifying areas of unmet need and potential, but it can also be used to help position research centres so as to increase the chance of satisfying enrolment estimates. One such example within pancreatic cancer demonstrates how it might be advantageous to take a more strategic outlook on recruitment centres.

By accessing and analysing in-depth patient population data however, it is possible to identify alternative solutions that will bolster the chance of reaching the required number. Take the pancreatic adenocarcinoma scenario for example, if the drug developers had targeted their research in Europe instead of the USA, one could have found a much more favourable research environment.

At present there are only 16 clinical trials that are open to recruiting pancreatic adenocarcinoma patients within Europe (compared to the 75 in the USA) and the population that meets this inclusion criteria is approximately 31,000 (compared to 28,000 in the USA)6,7. If we continue to assume that one-third of this population will be recruited, there will be 10,300 patients available for recruitment or 643 per trial. This translates into a 514% increase in the number of eligible patients available for recruitment per trial if research took place in Europe and greatly improves the chance of satisfying recruitment estimates. This is important because not only does it speed up the drug innovation process but it also reduces the time and cost of carrying out a clinical trial as well.

This is just one example of how the current clinical research environment is calling for drug developers to use more granular patient population data to form patient recruitment strategies, and analyze the distribution of specific patient segments. As drugs become more and more targeted, the need for this data is compounded, and information such as the whereabouts of the greatest concentration of patients with chronic heart failure, and a reduced ejection fraction within the New York Heart Association (NYHA) class IV is required7. Companies which utilise databases that provide this depth of data can gain a competitive advantage over other companies developing drugs in a similar niche, by indentifying the areas that they must target at a faster pace. As explained by Laurie Ryan, programme director for Alzheimer’s disease clinical trials at the National Institute on Aging at the NIH, “most studies do not finish in time due to low patient participation and slow recruitment” and in order for drug developers to produce the level of innovation they are seeking, a change in the process of research centre allocation must be addressed9. Patient segmentation databases should be recognised as an essential tool in the clinical research trial process if drug companies want to speed up clinical trial phases and reduce the costs associated with their delays.

The next article will be published on 10th January 2013.

Christopher Ehinger has over 14 years of pharmaceutical experience in various commercial roles in therapeutic, diagnostic and medical device businesses. This includes experience in blue-chip organizations such as SmithKline Beecham, GlaxoSmithKline, Amersham Health &amp, GE Healthcare where he was the Global Marketing Director for the Oncology and Neurology disease franchises.

He is currently the Managing Director for Black Swan Analysis, a unique fully integrated analysis practice founded in 2007. The company develops novel patient related healthcare databases which are made available via the web to the pharmaceutical and healthcare professionals on a subscription basis. Their current offering includes the Epiomic™ Patient Segmentation database that provides a robust, evidence-based source of patient populations that go beyond basic prevalence or incidence rates, to include essential conditions and patient attributes for each disease. It covers a comprehensive range of over 125 of the most prominent diseases, including over 2,500 unique patient sub-populations, displaying many of the clinically critical attributes and co-morbid conditions seen in these patients.

How can the barrier of clinical trial recruitment be overcome?