Valentina Jaramillo of Investigacion Clinica Latam explores the pharma market in Latin America in light of challenges in the US and Europe, in pharmaphorum’s emerging markets themed month.

The pharmaceutical industry is facing big challenges in the US and Europe with patents coming to an end and the decline in prescription drug sales, these issues are making emerging markets such as Latin America sound more attractive. The pharmaceutical market in Latin America is estimated at U$70 billion in sales and it will continue to grow1. This is mainly due to population growth, and an increment in their health coverage plus the growing economic situation of the region.

Brazil is the number one pharmaceutical market in the Latin America, on its way to being number four in the world, with an estimated U$25 billion2 share. Mexico is also rapidly growing, as well as Argentina, Chile, Colombia, Venezuela and Peru. Although due to their current political and economic situations Argentina and Venezuela might be lagging behind. This shows that the region as a whole is an attractive market for pharmaceutical companies to exploit.

“Brazil is the number one pharmaceutical market in the Latin America, on its way to being number four in the world…”

Latin American countries are starting to change their disease patterns due to economic development. The rapid economic growth brings an increase in prosperity, general health and longevity but it also brings an increase in diseases like diabetes and cardiovascular diseases. These changes in disease patterns open a new market for existing products3. 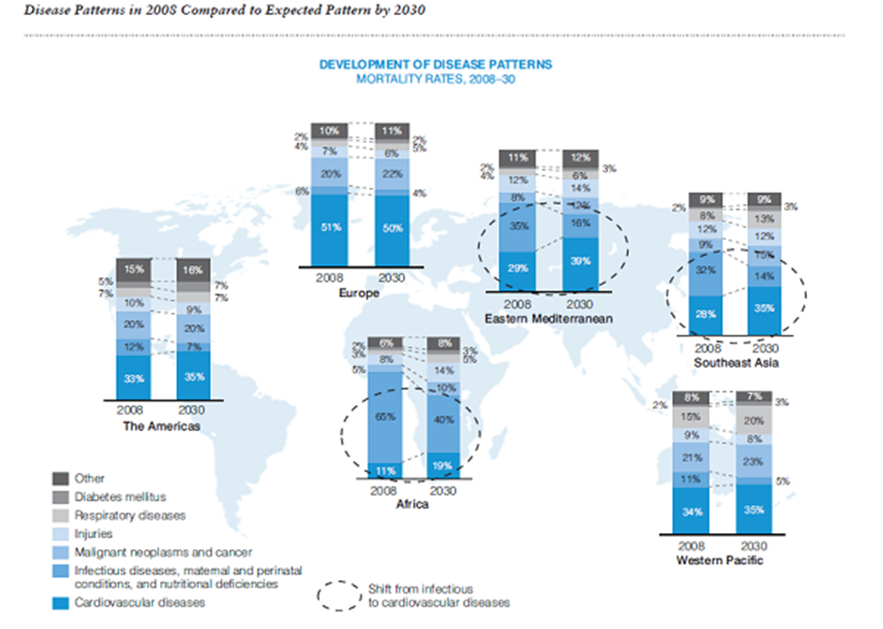 Even though market growth is attractive in Latin America, there are big challenges for the pharmaceutical industry to overcome. One of the challenges is that each country is a world on its own and multinationals need to adjust to the different regulations regarding sales, clinical research, market access and GMP amongst other. There has been some improvement in this area in the last couple of years with agreements between the health authorities in the countries that allow for certifications in one to be valid in another country. An example is the agreement between Argentina, Brazil, Colombia and Cuba that allow GMP certification in one of them to be valid in the others3. Multinational pharma companies need to have good relations with the government and work together with them in the development of the healthcare policy so as not to be left out. They need to make sure governments understand they are key players in healthcare and they can help the healthcare system.

Since all the countries in Latin America also vary in size, healthcare infrastructure and affordability, the pharma companies need to tailor their strategies for approaching each country´s market. Tailored strategies will assure success if they are conscientiously planned.

Another challenge for multinationals is the evolution of Latin American generics. Since medical prescriptions in the region have the generic name it is easy for pharmacists to recommend generic brands. In Argentina, by law, the prescription can only have the generic name so the patient has the option to buy generics. Due to price differences most people end up buying generics instead of original drugs. The problem with generics in Latin America is the lack of intellectual property protection and the fact that regulations are scarce so non original drugs are qualified as biosimilars and therefore bioequivalence are not requested tests. This is becoming less common but it still happens.

“Even though market growth is attractive in Latin America, there are big challenges for the pharmaceutical industry to overcome.”

Multinational companies have bought or partnered with local pharmacies and have given generic drugs appropriate quality control and bioequivalence tests. Localization through partnerships with local companies can be a solution for many of the challenges in the region so it should be thoroughly explored by companies wanting to make the most of these emerging markets.

Pharmaceutical companies also experience trouble with local industry protection on behalf of the government. Multinationals need to have their eyes opened and try to work out partnerships with local companies so they are not left out. They need to watch their prices because some of them become extremely high because of the amount of intermediates in the supply chain. In Colombia, for example, drug prices are regulated and since December 2013 these regulations are finally affecting pharmacies. This helps protect the consumer and also the pharmaceutical companies because intermediates can’t manage their prices as they please, resulting in highly elevated prices for original medications.

As we can see Latin America is a promising emerging market but it poses a challenge to pharmaceutical companies who want to make the best of this growing market. In order to take advantage out of Latin America, pharmaceutical companies need to have a clear understanding of how the region works. Tailored business strategies are needed for each different country in the region. Local partners are a must to overcome price pressures. Second branding is another strategy that can help leverage cost benefits that come from local operations. These are only examples of how pharmaceutical companies can approach the challenges that Latin America offers. Managers in the pharmaceutical industry need to be creative and be aware they are entering different markets than what they are used to, so bringing strategies from mature markets will probably end up failing.

The pharmaceutical industry is still on time to gain their share on this emerging market if they play their cards with intelligence. One last thing to take into account is that patience is needed in these markets; companies need to be in for the long term to see the real benefits.

2. Beyond Emerging- Latin America´s Pharma Industry is coming on its own. Sep 2013 http://lsconnect.thomsonreuters.com/beyond-emerging-latin-americas-pharma-industry-is-coming-into-its-own/

3. Booz&Co. Report. Pharma Emerging Markets 2.0. How emerging markets are driving the transformation of the pharmaceutical industry. 2013.

Valentina Jaramillo DVM is co-founder of Investigacion Clinica Latam. She is also founder and moderator of the twitter hashtag #hcsmla. She can be contacted at vale.jaramillo@gmail.com.

Closing thought: What potential does Latin America hold for pharma?