Johnson & Johnson (J&J) believes it can revolutionise healthcare and the pharma business model by getting to the root of the problem: don’t just treat disease, prevent it and intercept it.

The pharmaceutical industry has made a huge contribution to global health over the past hundred-plus years, thanks to it producing wave after wave of drugs which have been progressively better at treating diseases such as cancer, diabetes and heart disease.

But there are societal and financial downsides to this success:  it has helped create an ageing world population which is increasingly living with chronic and complex – not to mention costly – diseases.

The latest figures show that the over-55s in developed countries have, on average, two long-term conditions which require treatment, and this figure rises to three such conditions for those who live to be 80 or older.

The ever-growing cost of caring for these people is beginning to look unsustainable, and threatens to cripple healthcare systems around the world.

Those same healthcare systems must now address the problem, and most have identified greater public health measures to combat conditions such as type 2 diabetes, chronic obstructive pulmonary disease (COPD) and some cancers – as these are truly preventable diseases, driven by unhealthy lifestyles.

J&J and its scientific leaders have been thinking deeply about this problem for some time, and in the last few years have crystallised their aim: to switch from only trying to treat diseases once they have developed and instead identify, prevent and intercept conditions at the earliest stage possible.

“We are aiming for disease prevention and disease interception. That is not where we are today with patients, but we need to have bolder thinking. Can you prevent the patient from ever becoming a patient?”

He adds: “Once you frame it that way, that puts you in a very different zone.”

Suri was speaking at a media event at its campus in Leiden, Netherlands. It is home to Janssen Biologics, Janssen Vaccines, Mentor medical systems and the Janssen Prevention Centre. 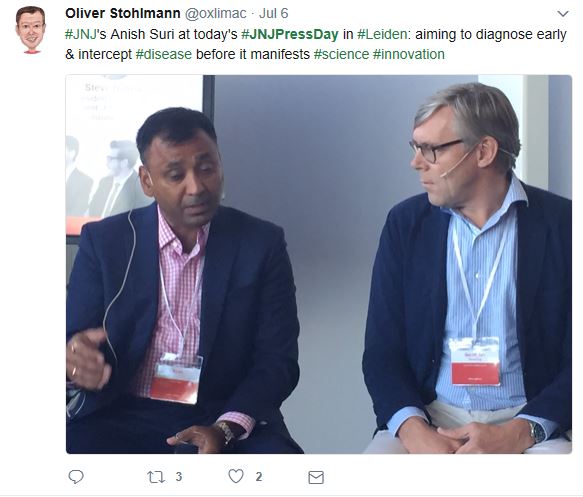 Anish Suri (left) speaking at the event. Image from the #Jnjpressday Twitter feed.

The event brought together J&J’s EMEA scientific and business leaders across its three divisions: pharmaceuticals, consumer health and medical devices.

The company is now aiming to develop products across its divisions which can help add more healthy years to people’s lives, not simply prolong their lives with chronic diseases.

In the words of the company’s research supremo Dr William Hait: “Our goal is to make significant progress toward a ‘World Without Disease’ by 2030.”

This may sound like giddy idealism or hype, but the scientific basis for such ambition is developing daily – even if the timeline is measured in decades, rather than years.

So how does J&J plan to achieve this ‘moonshot’ challenge? Well, while this approach could completely overturn its current business model one day, it won’t be disinvesting in its traditional approach just yet. Its pharma division Janssen is currently the fourth-biggest R&D spender in the sector, devoting $7 billion in 2016, and this investment has paid off in recent years. The company has outperformed all its peers by gaining approval for 11 new molecular entities since 2011. Among these are five major treatments which are expected to sustain growth in the coming years: cancer drugs Darzalex and Imbruvica, antipsychotic franchise Invega Sustenna/Xeplion, oral anticoagulant Xarelto and, lastly, inflammation treatment Stelara.

But, alongside this, the company is investing for a very different future, and established three brand new ventures in 2015:

The Janssen Prevention Centre (JPC). Based in Leiden, this is focused on the prevention of chronic, non-communicable diseases, such as Alzheimer’s disease, heart disease, cancer, and autoimmune diseases, which increasingly impact ageing populations and burden healthcare systems worldwide.

The Disease Interception Accelerator (DIA), based in Raritan, New Jersey, is an incubator-like group which addresses the root causes of a disease. Its researchers are looking to intercept diseases far earlier than the current clinically-accepted point of diagnosis, and will seek solutions that stop, reverse, or inhibit its progress.

The first disease candidates for its work are type 1 diabetes and various forms of cancer.

It will also combine pharmaceutical with non-pharmaceutical approaches to intercepting disease progression for at-risk populations – something that it believes will help it align with stronger health messages to individuals and groups in society.

Finally, the Janssen Human Microbiome Institute (JHMI) is based at the J&J Innovation Centre in Kendall Square, Boston, Massachusetts. It focuses on an emerging area of science of the microbiome – the diverse population of bacteria living in and on the human body.

Understanding of how the microbiome may play a role in major autoimmune diseases and other conditions is growing, with numerous large and small companies investing in the field. Janssen hopes to be in the vanguard by developing therapeutic agents and diagnostic procedures that could have a major impact on a range of diseases.

Among its projects is one led by Caelus Health into a microbiome-based treatment for obesity-related type 2 diabetes and cardio-metabolic complications.

Much of the inspiration for this emphasis on prevention can be traced back to Crucell, the Netherlands-headquartered vaccines company which J&J acquired in 2011.

Johan van Hoof joined the company with the Crucell acquisition, and is now area head for infectious diseases and vaccines. 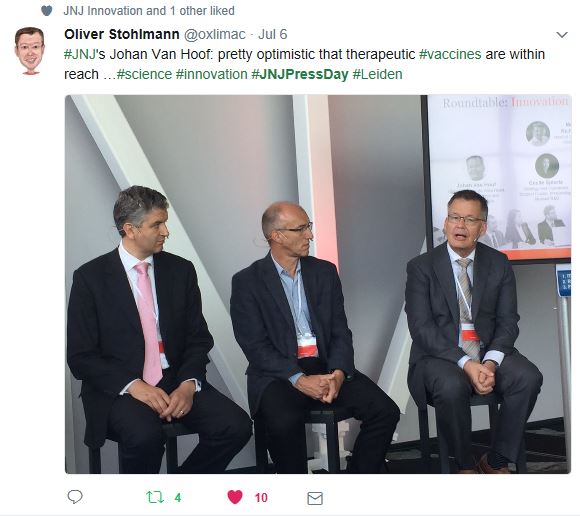 Johan van Hoof (right) is an expert in vaccines development. Image from the Twitter feed #Jnjpressday.

As a career-long vaccines developer, he knows these products can prevent ill health before it develops. Infectious diseases have an incubation period, but van Hoof says one can reconsider non-communicable diseases, such as rheumatoid arthritis (RA), heart disease or Alzheimer’s disease, as having their own variants on this incubation period, where currently imperceptible biological changes are occurring.

“We think it is possible to intercept disease at a far earlier stage. We all know that you get a warning light in your car before it is going to break down, so why can’t we replicate that in humans?”

The first stage of this process is to find biomarkers which will reliably flag the earliest stages of the disease.

His research teams are working on some remarkable next-generation products: a vaccine to halt HIV by preventing infection, as well as a therapeutic vaccine to treat those already infected.

Alongside this are projects to prevent respiratory syncytial virus (RSV) and flu, prevent multidrug-resistant bacterial infections, global pandemic risks such as Ebola and work on therapeutic vaccines for cancer.

The company is even working to develop a therapeutic vaccine for Alzheimer’s disease (collaborating with AC Immune on its ACI-35).

This compound is currently in early-stage trials but could work by stimulating the patient’s immune system to produce an immune response against the Tau protein, implicated in the disease.

Janssen’s scientists concede it will be many years before a preventive vaccine or drug against prostate cancer, Alzheimer’s disease, heart disease or RA can be developed.

But it’s important to build the visionary thinking today to start the transformation of medicine, says Johan van Hoof.

“Expectations will be higher in the future. By the time they reach the market, ‘incremental’ products will be seen as outdated.”

The company is looking for synergies across its diverse divisions, with pharma, medical devices and consumer health believing they may develop integrated products and services to keep people healthier for longer.

In its medical devices division, the company is tackling the global obesity epidemic by supporting bariatric surgery, including the development of an app to help patients go through the process.

In consumer health, the company markets nicotine replacement therapy – aimed at helping the 1.7 billion smokers in the world to quit.

The company is trying to underpin all its work with solid science.

He says their research is currently focused on identifying reliable biomarkers to measure biological age. He states that there are already ways to gauge this, but their aim is to create a simple test that individuals can use on a personal basis.

He says the founding head of the Janssen Prevention Centre, Jaap Goudsmit coined the term ‘immorbidity’ to describe the company’s ultimate goal.

Rather than aiming for the unobtainable idea of immortality, immorbidity would instead be a long life – possibly well over 100 years – lived without disease.

At the moment, he clarifies, you will struggle to find any reference to the concept on the web – but he believes it could be the future.

“We will do our best to make this an explainable, well-known term, so that one day you’ll find it on Wikipedia.”

Emphasising how these diagnostics could transform attitudes to preventative health, he adds: “In the future, we think people may look back and say: ‘can you imagine that 100 years ago people waited until they got ill before tackling a disease? Whereas now you can intervene before it becomes a problem.’  That’s our aspiration.”