Crossing borders for the rare disease cause

Patient advocate Alan Thomas shows how his commitment to sharing the patient’s voice takes him to meetings around the world in his quest.

Patient engagement and patient involvement are terms we hear a lot from the pharmaceutical industry. Each patient, living daily with their condition, is an expert in it and, as a rare disease patient myself, I have made it my mission to ensure that their voices are heard and views incorporated.

Diseases do not respect country borders so I, in turn, travel across borders from my home in Wales to international events to make sure that we are represented. Let me share with you here the journeys I have made so far this year on behalf of rare disease patients.

Earlier in the year, I was invited by Dame Kay Davies to attend the Oxford Rare Disease Initiative (ORDI) conference in Oxford, UK. This two-day event had good speakers and great networking opportunities although, with topics ranging from genomics and gene therapy to haematology and immunology, alas some of the scientific speak went over my head.

Even though it was held in two buildings which were some distance apart (and involved some cobbled paving – I am a wheelchair user!), it was a very welcoming experience and very educating, though I found it a steep learning curve.

The organisations and researchers present also displayed posters on their work, which were studied carefully as there was a competition for the best project. I was very proud to see that the winning poster not only featured Ataxia, but that I also knew some of the team! It was titled Hereditary Cerebellar Ataxia – Where Neurodevelopment Meets Neurodegeneration. 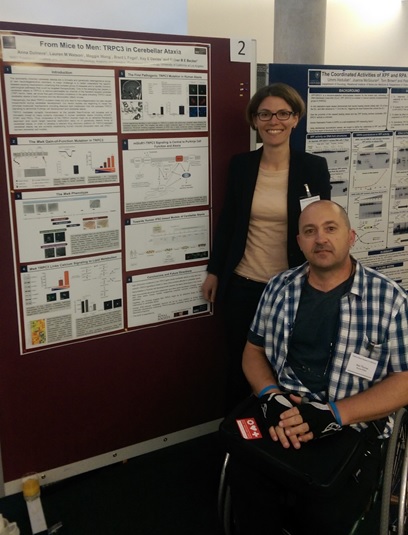 Alan Thomas and Esther Becker with the winning poster, as judged by Dame Kay Davies

A month later, I crossed another border – from the UK into France – when I attended and spoke at the Doctors 2.0 and You conference in Paris.

This was another great platform for the patient to be involved and engaged. Paul from pharmaphorum attended too. Read his review here.

Then, it was back across the border again to London to speak about rare disease and patient engagement at two events, Patient Centric Clinical Trials Europe and The Patient Summit. Both of these were very good experiences, with good networking and providing opportunities for getting pharma to talk with the patient.

A real live patient, recounting a case study from their life, really does make a lasting impression.

Next I attended the Genetic Alliance UK AGM and 25-year anniversary celebrations. This was a good chance to come together with friends, share information, experiences – and combine networking with a piece of anniversary cake.

Attending so many meetings and conferences has helped me to make inroads into changing the historical mindset that pharma should not talk to the patient, and also the view of some patients, who say that talking to pharma might be seen as ‘going over to the Dark Side’.

I am proud that I am involved in bringing the patient voice into the conversation and that my opinion is respected in this rapidly advancing community.

The awareness-raising adventure continues, criss-crossing borders along the way, as I attend events physically, and by virtual communication.

Alan is establishing a patient-driven and focused group and campaigns at many levels, including patient forums, local and regional health boards, Welsh/UK government organisations, as well as taking part in many global conferences, in person or via the internet.

Ataxia means ‘lack of order’. People with ataxia have problems with movement, balance and speech. Alan is fighting to return order to the lack of order.

He was proud to receive a nomination from the Bevan Foundation in 2015 in the Health and Wellbeing category.