German big pharma giant Boehringer Ingelheim recently held a research and development day to provide an update on progress in its key disease areas. pharmaphorum caught up with Dr Victoria Zazulina, Global Clinical Programme Team Leader for Oncology, to find out about the company’s expansion into this therapeutic area.

For over 125 years, since its humble beginnings in the village of Ingelheim am Rhein, Boehringer Ingelheim has been at the forefront of ground-breaking discoveries in respiratory, diabetes, HIV / AIDS, vaccines and COPD.

At a recent R&D press day in London, Boehringer shared its “long and healthy pipeline” in three of its five core focus areas: respiratory, cardiometabolic and the most recent addition, oncology (the other two areas being CNS and immunology). “We have narrowed down our focus areas to manage our portfolio as best we can,” explained Dr Charles de Wet, who has been Boehringer’s Medical Director of UK & Ireland for the past 22 years.

But it is Boehringer’s move into developing novel cancer treatments that has seen the biggest shake-up of its pipeline. The company states it has “responded to the substantial unmet medical needs of patients with cancer and began investing in research designed to advance its understanding of basic cancer biology and therapeutic intervention“.1

“But it is Boehringer’s move into developing novel cancer treatments that has seen the biggest shake-up of its pipeline.”

Boehringer is, of course, a newcomer to a well-established area. Research into cancer has been found to date back to the Egyptian times, but it wasn’t until the early 2000s when anti-cancer treatments began to saturate the market. Today, the pharma industry invests heavily in oncology research and development; largely due to the fact that cancer is the third leading cause of death in high-income countries. Statistics say that around the world, there are an estimated 12.7 million cancer cases diagnosed each year, with this number expected to increase to 21 million by 2030.2

However, research into cancer treatments has evolved enormously over the past decade. Today’s generation of researchers are moving beyond non-specific chemotherapeutic approaches and developing treatments that can recognise the difference between healthy cells and cancer cells.

“Everything we do is about targeted therapies,” explains Dr Victoria Zazulina, Global Clinical Programme Team leader – Oncology. “We understand that the ‘one-size-fits-all’ approach no longer works; you can’t just give everyone the same drug because they have the same diagnosis.“

Targeted therapies, or personalised medicine as the field is often called, are a new model for pharma whereby medical decisions and practices are tailored to the individual patient. This model is being seen increasingly in the field of cancer, where knowledge about different, more specific, targets is always changing. 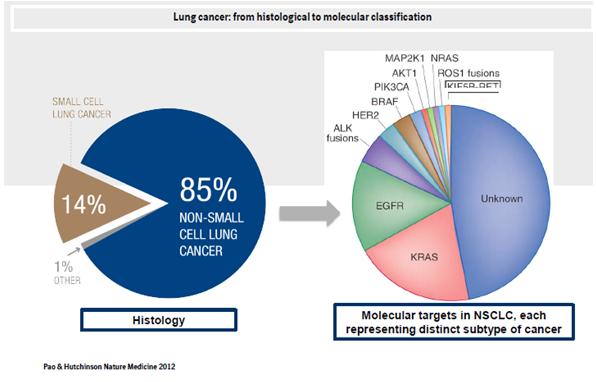 One distinct subtype of lung cancer is defined by mutations in epidermal growth factor receptor (EGFR). Success for Boehringer came recently in the form of US FDA approval of afatinib tablets, under the brand name of Gilotrif, as a new first-line treatment for patients with metastatic NSCLC whose tumours have EGFR exon 19 deletions or exon 21 (L858R) substitution mutations, as detected by an FDA-approved companion diagnostic test. “Afatanib is one of our most fascinating front runners,” says Dr Zazulina.

Another of Boehringer’s investigational lung cancer compounds is nintedanib, which is a triple angiokinase inhibitor that has been found to target three of the receptor tyrosine kinases shown to aid in the regulation of angiogenesis (the process by which growing tumours secure blood supply): vascular endothelial growth factor (VEGF) receptor, fibroblast growth factor (FGF) receptor and platelet-derived growth factor (PDGF) receptor. “Nintedanib is another compound which already has got some exciting results showing overall survival benefit,” explains Dr Zazulina. “All of our compounds are exciting because they do not repeat each other; they just supplement and go after different modes of action.“

“In theory, you can treat 100% of patients with the same medicine,” says Dr Zazulina. “But what we want to know today is which patients is it most effective in, because then we can guide best clinical practice.“

But science is everything when it comes to Boehringer’s R&D strategy. “Although science is the primary driver, a drug is also driven by patient benefit and also by health systems.” In other words, recognition that therapeutic benefit alone is not enough – it must be at the right cost for the outcome – is a factor that can sometimes be overlooked in early research.

This is, of course, difficult to factor in for new drugs that are some years away from the market, as commissioning bodies, such as the UK’s National Institute for Health and Clinical Excellence (NICE), are always updating their treatment guidelines, resulting in ever-moving goalposts. So while it may have used standard chemotherapy treatments as a comparator in the past, it is now looking at incremental costs and saying it wants to know more from a company about which drugs work for specific patient populations. “It’s these three elements coming together that say that targeted therapies are the way forward for cancer medicine,” adds Dr Zazulina.

As Boehringer continues its expansion into developing new cancer treatments, there will be successes and failures along the way. However, by considering the real-world application for patients and healthcare systems at such an early stage it is enhancing the probability of success. No doubt all those involved in finding and delivering new treatments for cancer will be watching its progress with great interest.

Hannah joined pharmaphorum in early 2012, after graduating with a degree in Magazine Journalism & Feature Writing in 2011, and leads our news coverage, in addition to liaising with new and existing feature authors. With over three years’ experience working within the journalism industry alongside university, Hannah has written for a number of different print and online publications, within the women’s lifestyle, travel and celebrity sectors. Now focussed on the pharma sector with her role at pharmaphorum, Hannah is embracing the challenges of working within a fast growing media organisation in this rapidly changing industry sector.

In what ways will personalised medicine evolve over the next decade?