Pharma companies across Europe are gearing up to disclose for the first time the names of health professionals and healthcare organisations who they have made payments to. In the first of two articles, Andrew McConaghie talks to Heather Simmonds, the director of the UK sector’s self-regulatory body the PMCPA about the rules, and how pharma can prepare.

The pharma industry across Europe is embracing transparency in order to restore and maintain faith in its practices – it wants to show that its relationships with healthcare professionals (HCPs) are all ‘above board’ and are, indeed, necessary to help improve healthcare for patients.

But publishing names of individual doctors and other HCPs alongside details of certain payments made carries great responsibility – and a certain amount of risk. Companies need to make sure they adhere to all the new regulations, be accurate in the names and payments published, and to maintain good relations with these HCPs in this new, wholly transparent era.

Europe’s new disclosure rules relate to certain ‘transfers of value’ – this includes payments or donations made to an individual, health professional or organisation, such as a hospital. As such, they represent the next stage of making transparent the relations between pharma and its customers. (See Box 1 for the types of payments covered by the EFPIA Code, Box 2 for those covered by the ABPI Code and Box 3 for detailed definitions).

The data will be published before 1 July 2016, which means pharma companies are now collecting and checking data from 2015 in preparation for this major undertaking.

The UK pharma industry under self-regulation, led by the Association of the British Pharmaceutical Industry (ABPI), has become one of the leaders in Europe in terms of moving towards greater transparency. UK companies have been disclosing aggregated data on payments made to HCPs since 2012.

Despite this, the new requirements represent a major step up in terms of volume and complexity of the data to be processed and published.

As well as publishing the names of individual health professionals from 2016, pharma will also have to publish, for the first time, aggregate data on payments made for R&D services provided by healthcare organisations (HCOs) and HCPs.

“Even though the UK industry is used to disclosing data, the new requirements mean the industry has a lot of new work to do,” says Heather Simmonds, director of the Prescription Medicines Code of Practice Authority (PMCPA).

Before we look at the practicalities of the new rules, it’s worth stepping back to consider why they are needed, and how pharma has got to this point.

The truth is that the worldwide pharma industry has been bedevilled by controversies and scandals over the last decade or more. These have damaged its reputation – one you might otherwise suppose should be sky-high, given its focus on developing life-saving medicines.

A great many of the controversies have been to do with pharma’s relationships with doctors, and centred on allegations of undue influence and even bribery.

Unfortunately, most of these problems have been of the industry’s own making; the most recent case is GlaxoSmithKline’s (GSK) bribery scandal in China last year, in which the company’s operatives were found to have used third parties to channel ‘kickbacks’ to doctors in return for prescribing their medicines. The firm was eventually fined $490 million by the country’s authorities, and GSK’s head in China, Mark Reilly, was given a three-year suspended sentence and deported in disgrace.

Such cases have forced pharma to make its dealings with doctors, other health professionals and HCOs more transparent. This is particularly the case in the US, which introduced the Physician Payments Sunshine Act (a law first passed in 2010) which compels the industry to publish payments or other ‘transfers of value’ to physicians and teaching hospitals. Similar legislation has been introduced in some European countries like France and Portugal.

After several years of planning, the first US data went live in September 2014. Perhaps surprisingly, while journalists such as ProPublica did question the underlying relationships and behaviour, most of the initial criticism directed at pharma companies was for errors and omissions in their data. Meanwhile the American Medical Association, which represented the 200,000 doctors affected by the new law, said the project had been ‘plagued’ by problems of accuracy, and protested that physicians had not been given enough time to review the data published on payments they had received.

These and other lessons from the US experience could be particularly valuable in Europe as it prepares for the 1 July 2016 deadline.

The UK has been one of the leaders in Europe in terms of transparency, and has been publishing aggregated data (i.e. no names are published) on its payments to HCPs for several years.

But the move to publishing payments against named healthcare professionals represent a huge shift for pharma, health professionals and the NHS alike.

The UK market tends not to suffer from the very serious scandals seen in China and the US. However in December last year one company, Galderma, was found to have offered a ‘pecuniary advantage‘ to health professionals in connection with attending a promotional meeting, a ‘serious breach’ for which the company was publicly reprimanded and removed from a list of non-ABPI member companies covered by the ABPI Code. This case confirms that, despite huge progress in the sector’s ethical standards, there is no room for complacency in an industry where good, ethical relations with health professionals is essential.

The data challenge, the cultural challenge

Putting aside these extreme cases for a moment, and assuming that most UK pharmaceutical companies will not repeat such mistakes, what are the biggest everyday challenges for companies preparing for the 2016 disclosure deadline?

First, companies must make sure their data for disclosure is compliant with the rules, complete and error-free as possible.

Secondly, pharma must ensure that the practice of publishing names of health professionals, HCOs etc, and the nature of the transfers of value, doesn’t undermine relations with them. Rather, the new transparency can only be called a success if it strengthens trust between the industry and HCPs and HCOs and increases the wider perception of these relations as being above board and trustworthy.

The ABPI has just updated its Code of Practice for 2015, having completed its adoption of the principles of the European-wide EFPIA Disclosure Code, which was agreed in 2013. 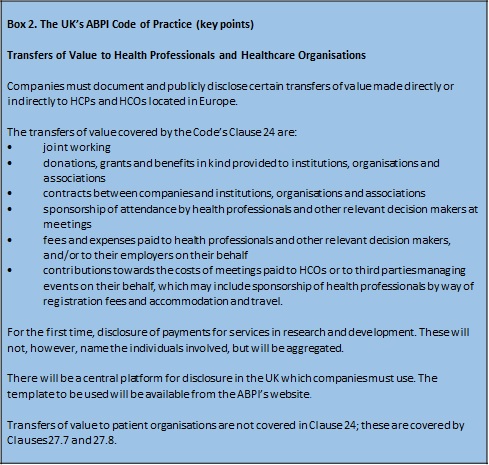 Adapted from the ABPI Code 2015. Click here to read the interactive 2015 Code in full. 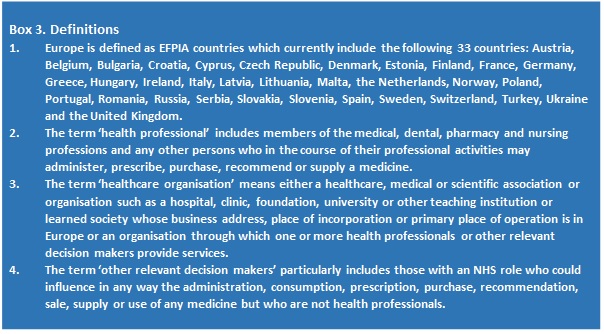 The UK is just one of 33 national pharma industry association members of EFPIA which have adopted the EFPIA HCP/HCO Disclosure Code requirements – a very clear indication of the commitment behind this initiative and a huge undertaking for pharma companies.

Despite the UK industry being now well acquainted with disclosure, the new requirements to name individual healthcare professionals and organisations represent a major step up in terms of volume and complexity of the data to be processed and published.

“There are many more implications from the new rules, such as making sure the data is checked with the individual health professional,” Heather Simmonds points out.

The rules also mean that any payment to a UK-based HCP needs to be tracked, whether it comes from a head office outside the UK, or from the UK affiliate.

“If the overseas head office pays a UK health professional, they have to make sure it is disclosed,” adds Simmonds. “That means putting systems in place, and these will clearly require a lot of work.”

For countries operating across Europe, multiply this workload across 33 countries, each with their own slightly different requirements not to mention regulations, and one begins to appreciate how great the workload is.

Is pharma ready to disclose its payments to doctors in Europe?

The newly updated 2015 edition of the ABPI Code of Practice

To follow in Part 2: Lessons from the US Physician Payments Sunshine Act, and how the UK has adapted EFPIA’s ‘template’ for disclosure.

Celgene gets set for stellar growth in Europe