Who will be the biggest pharma players in orphan drugs?

New analysis from GlobalData has identified the predicted top 15 pharma players in 2025 for organ drugs, with Roche coming out in the lead.

The research also notes that M&A deals have been the primary way in which big pharma companies secure these orphan drug designations, with very few rare disease drugs being developed in-house.

“Despite the allure of the lucrative orphan drug market, this is not a viable sector for all pharma companies as it requires specialist capabilities,” GlobalData said. “In fact, most big pharma companies have inherited specialty business units through M&As.”

The collective sales data from these therapies with organ drug designations reveal that Roche has generated the highest sales from orphan drugs and will maintain its leading position going forward.

“Companies will need to start becoming more transparent about how the high prices of some orphan drugs are arrived at”
Vinie Varkey, GlobalData

Maura Musciacco, GlobalData’s senior director of neurology and ophthalmology, says: “This can be largely attributed to [Roche’s] oncology portfolio, which has yielded and will continue to provide a significant proportion of the company’s sales.” 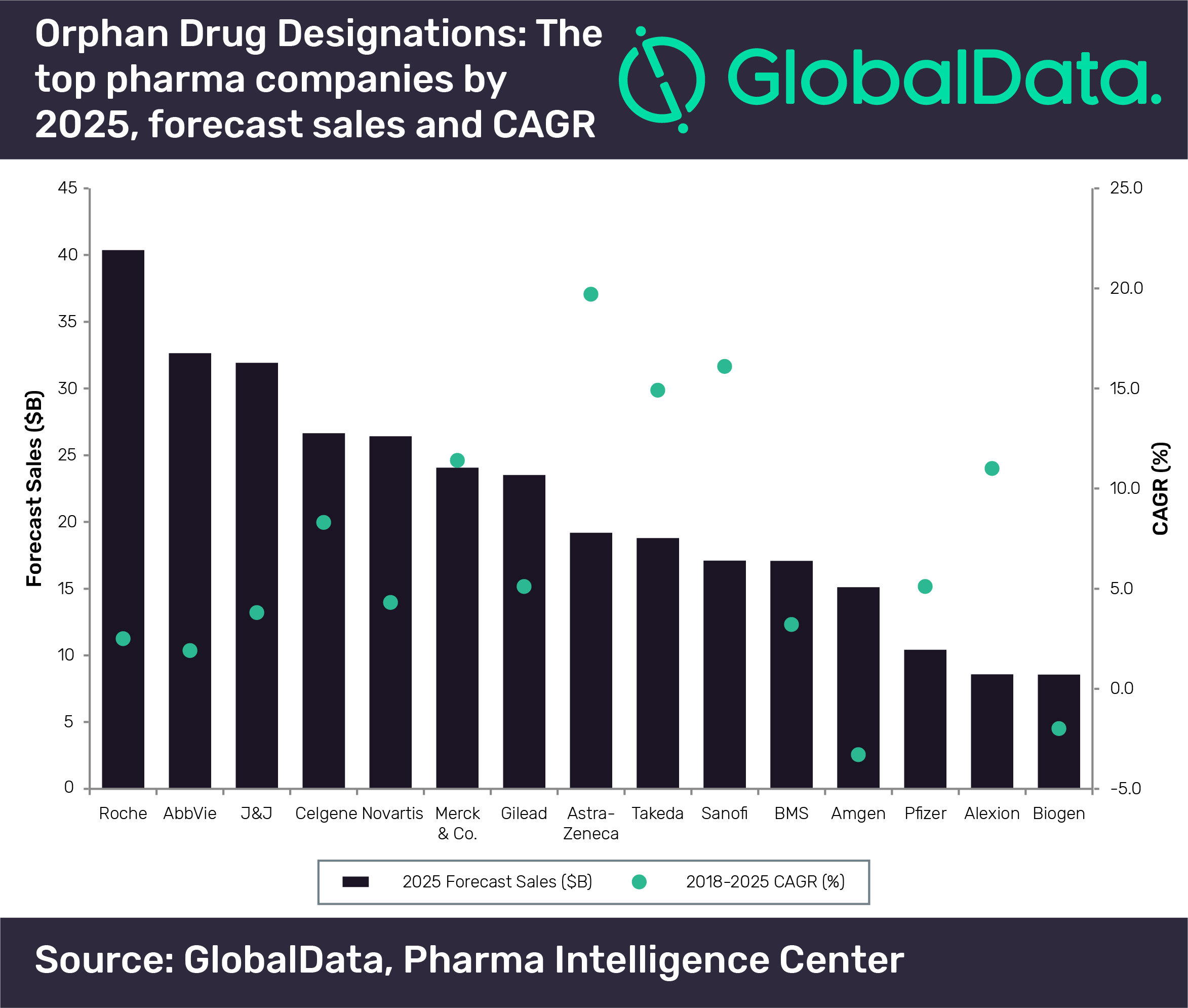 Musciacco added: “Notably, none of these drugs were originally developed in-house at Roche, but were gained through successful M&As, as exemplified by Roche’s acquisition of one of the leading biotech players, Genentech.”

“Amgen and Biogen are expected to turn to M&As in the near future as a means to maintain their presence in the orphan drugs sector”
Maura Musciacco, GlobalData

Musciacco continues: “AstraZeneca is expected to have the strongest CAGR for its therapies with orphan drug designations over 2018–2025.

Takeda is also expected to see strong sales growth from its therapies with orphan drug designations. Of these, the ones with the strongest CAGRs were inherited from its M&As with Shire, Ariad Pharmaceuticals and Millennium Pharmaceuticals.

At the other end of the spectrum, the only players that are expected to have negative CAGRs from their therapies with orphan drug designations are Amgen (-3.3%) and Biogen (-2%).

Musciacco adds: “In both cases, this can be attributed to their mature brands, declining sales due to cannibalisation from generics or biosimilars, and ultimately the failure to replace their old flagship brands with novel pipeline drugs.

“In a defensive strategy, Amgen and Biogen are expected to turn to M&As in the near future as a means to maintain their respective presence in the orphan drugs sector and rejuvenate their pipelines by inheriting the expertise from niche specialist players.”

Speaking to pharmaphorum, Vinie Varkey, senior analyst of neurology and ophthalmology at GlobalData adds that for big pharma companies with potential to spend money, investing in orphan drug programmes and deals represent a growth opportunity – but that growth is not expected to be straightforward.

“This is due to reasons associated with rarity of disease, small patient numbers, and the need to establish long-term safety and efficacy of therapy during clinical trials.”

He adds that the actual revenue from orphan drugs can vary greatly:

“At the end of the day, I think the two main factors that will be of importance to pharma companies are the mechanism of action of the therapy being developed and the market potential (related to patient numbers).”

Another factor is the typically high prices and resulting market access challenges for some orphan therapies, which Varkey says could continue to have a noticeable impact on pharma companies’ orphan drug strategies in the future.

“With pricing pressure becoming more tangible for pharma, I think these companies will need to start becoming more transparent about how the high prices of some of the innovative drugs are being arrived at.

“Even if a therapy is approved but the pricing is not in line with general guidance (for example guidance published by the Institute for Clinical and Economic Review (ICER)), then payers are expected to push-back, and this may result in restricted access of the therapy to the most severely affected patients.”