How would single payer healthcare in the US impact pharma? A pricing perspective

The US healthcare system is the most complicated amongst advanced industrialised countries.

Health care provision is made up of a patchwork of fragmented programmes that are both publicly and privately funded and not universally accessible.

In 2010, the Patient Protection and Affordable Care Act was created to help increase the coverage of healthcare for Americans, but there are still over 35 million people without.

Along with this, prescription drug prices in the US consistently rank among the highest in the world.

High prices are attributed to government-granted monopolies, with primary decision makers unable to negotiate prices directly with manufacturers. The US does not have a regulator to control drug prices and is based on a free pricing model.

Up to 91.6% of the US population currently rely on coverage from policies such as commercial health plans, Medicare and Medicaid to absorb the high costs of medicines. However, 14% of prescription medicine costs are still paid out of pocket.

“Although the argument is often seen as patient vs. pharma, there are many other stakeholders involved”

President Trump has previously commented on the ‘extortionate’ prices Americans pay for their medication compared to the rest of the world and has campaigned to address the situation.

He declared “We’re going to be ending global freeloading” in reference to the fact that profit margins of brand name drugs in the US are as much as four times higher than those in more regulated markets such as Europe and Japan.

President Trump argues that Americans are left to pay for the innovation that foreign patients enjoy and that other countries are benefiting from the high prices in the US.

In an attempt to put an end to this, he has suggested he may leverage trade agreements to secure policies that would increase prescription drug prices overseas in the hopes that it may lower prices in the US.

Some states have even started importing drugs from other countries such as Canada to obtain cheaper prices but causing further issues with supply and demand.

In September 2019, Speaker of the House Nancy Pelosi introduced a drug-pricing bill to be debated in congress. The aim of the bill is to allow the federal government more control over healthcare decision-making. The hope is to create a pricing ceiling determined by what other government run healthcare systems pay.

While insurance companies would still be able to choose which medicines they cover, these government-set prices would replace the private sector prices covered by Medicare.

Pharmaceutical lobbies such as PhRMA (The Pharmaceutical Research and Manufacturers of America) have been campaigning to block sweeping changes to the health care system in order to protect the industry’s position and have successfully been doing so for many years.

Many pharmaceutical companies argue that they rely on the revenue generated from sales in the US in order to deliver new and innovative medical advances.

While drug prices have been under political scrutiny, drug expenditure only accounts for on average 15% of current health care spending, and there are many other factors that play a significant role in the financial burden of the American healthcare.

The idea of a government-run, single payer healthcare system

While centralising a healthcare system is a monumental job, it has been done in some Nordic countries with varying levels of success, however the same cannot be said for the ongoing efforts in Mexico.

With the US being a much larger market and their increased lobbying for lower drug prices what would be the impact on global innovation if the US were to adopt a single payer system?

Firstly, the government would have significantly more buying power to exert pressure on drug prices due to economies of scale.

The top five pharmaceutical companies by market share generate between 40-50% of their revenue from US sales. EU sales only contribute between 20-30% of total revenue with an average of 70% of total revenue generated from the US and EU combined. These two regions alone provide nearly all pharmaceutical companies with a majority of their revenue, making them key targets for the market access of new products. 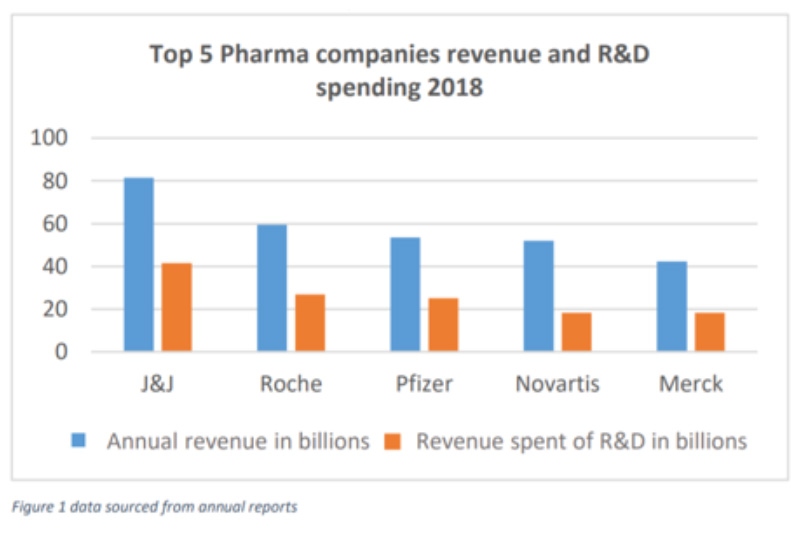 When it comes to reinvesting this money, on average most major pharmaceutical companies spend between 15-25% of their revenue on research and development.

Let’s assume that with a single payer system, the US government would be able to bring about a decrease in drug prices to the levels of those paid by the NHS in the UK or other single payer systems. If this were to be introduced, pharmaceutical companies are estimated to lose on average 25% of their total revenue. This equates to the entire research and development budget in the top five pharmaceutical companies, if not more.

However, pharmaceutical companies will need to maintain significant R&D spending in order to ensure they have a pipeline of new drugs for future revenue. Therefore, other operations would likely be more affected by the resulting decrease in revenue.

While the primary goal of having a government-run health care system would be to drive down drug prices in the US, there are many other factors that impact major relevant healthcare related stakeholders that extend far beyond this. Just a few of the potential impacts on healthcare stakeholders are set out in the table below:

The primary advantage for patients would be lower drug prices or, if a NHS-type scheme were to be adopted, very little to no out of pocket payments at all.

Although pharmaceutical companies would have less revenue, innovation is less likely to be affected as many molecules are discovered in academic institutions and small independent biotechs, and are sometimes government funded.

However, the downstream costs of having the capital to invest in those biotechs and progress drugs through clinical trials and commercialisation of new drugs entering the market will be impacted; not only does this rely on generated revenue but also external investment.

With less funds available there may be less reinvestment in ensuring that newer developmental drugs become commercially-viable.

An example of the process is Merck’s blockbuster immuno-oncology drug Keytruda (pembrolizumab) which was originally discovered by academics. The molecule then evolved and proved its success during early stage clinical trials in a biotechnology company before a series of acquisitions resulted in it ultimately being acquired by Merck for late stage clinical development and commercialisation. Merck then provided the funding for the drug to be available for patients today.

To give an idea of the importance of Keytruda’s success on the continued fortunes of the company, it is currently responsible for the bulk of Merck’s R&D spend, which totalled nearly $10 billion in 2018.

This article outlines an extreme scenario that is, for now, unlikely to happen given just how politically divided the country is over healthcare.

According to recent US polls, single payer healthcare is gaining popularity but when you factor in the disruption in coverage and the potential tax increases, support begins to wane.

It is difficult to imagine how the USA would even begin to implement such large scale change particularly given how legislators, policy makers, healthcare and insurance providers are all still trying to wrap their heads around what it would really mean.

At the end of the day, pharmaceutical companies are trying to work in the interests of patients but we forget that these companies are also thriving businesses that are trying to maintain a successful business model and continue to attract investors.

Whatever the future holds, let us hope a compromise can be reached that ensures innovative drugs are accessible to all those in need of them.

Katie Cudmore is currently a market access analyst and holds a Masters in Neurophsycopharmacology from the University of Cambridge. Her past experience includes working as a project manager for a CRO specialising in oncology clinical trials. In 2019, Katie started working in life science consulting and has had experience in regulatory digital transformation, internal communications and medical affairs before specialising in market access.