Galen Growth Asia has released its Q3 2019 Asia Pac HealthTech, aka digital health, ecosystem key trends interim report, which provides a checkpoint to bridge our mid-year and full year reports, each one powered by HealthTech Alpha.

In our H1 2019 funding report, we stated that the Asia Pac HealthTech ecosystem momentum continued unabated closing at the mid-year point at US$3B invested, building on the back of a record breaking 2018 and a superior Q1 2019.

The Asia Pac HealthTech ecosystem records its weakest quarter of funding since 2016. With Q3 2019 cumulative deal volume down 40% YoY, the slide was further accentuated by the average deal size falling to US$5.2M from US$18.2M at the end of H1 2019.

The key drivers for this lackluster performance include: 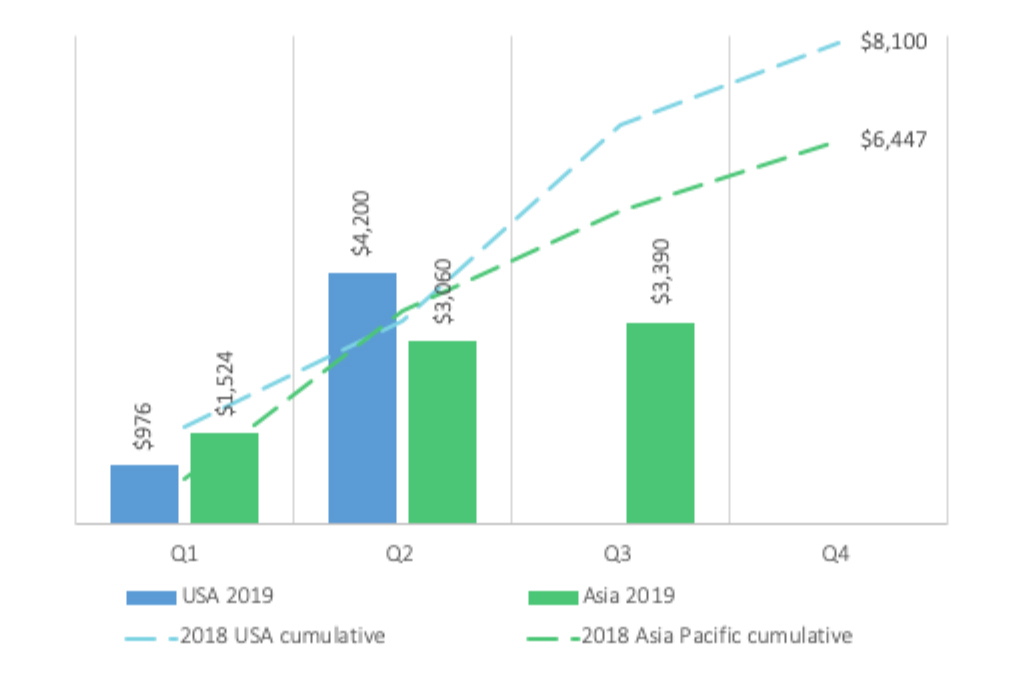 Were we simply witnessing the ecosystem pausing for breath before returning to the race or are the growing number of headwinds causing significant concern for investors with respect to both exit routes and access to deal flow?

For the past 12 months, observers of this ecosystem and Asia Pac macro-trends have not helped but notice the brewing storm of headwinds influencing the region, and more particularly investors’ strategies. Principal ones would include (not exhaustive):

Despite claims to the contrary by investors, corporations and startups in the region, in Galen Growth Asia’s sentiment surveys conducted in late 2018 and more recently at this year’s mid-year point, investors have clearly taken their foot off the investment peddle. 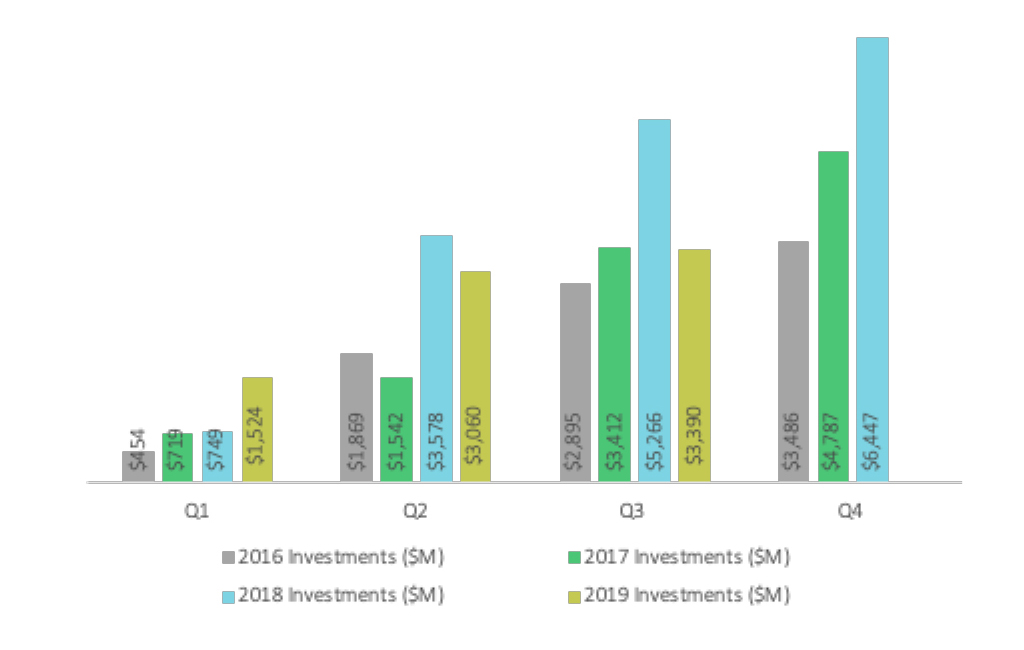 Show me the money!

Total investment in digital health in Asia Pac in Q3 2019 closed at US$3.4B, down 39% compared to Q3 2018 (not allowing for the 8 mega-deals in Q3 2018) whilst the total number of deals is virtually flat with a dip of ~6%, resulting in a significant reduction in average deal size thus indicating a favouring of earlier stage deals.

Closer scrutiny of the funding allocation by stage across Q3 deals to better understand the dislocation between total funding and total deal volume reveals that 25% of deal volume went to Series A deals compared with only 9% in H1 2019.

Indeed, as previously stated, Early stage deal volume share reversed an eight-quarter trend of erosion in Q3 2019 recording 37% of a total deal volume, closely followed by Series A deals which also recorded an uptick to grab 33% of total deal volume.

In contrast, all Series B, C & D (and beyond) deal volume all experienced a downward trend. 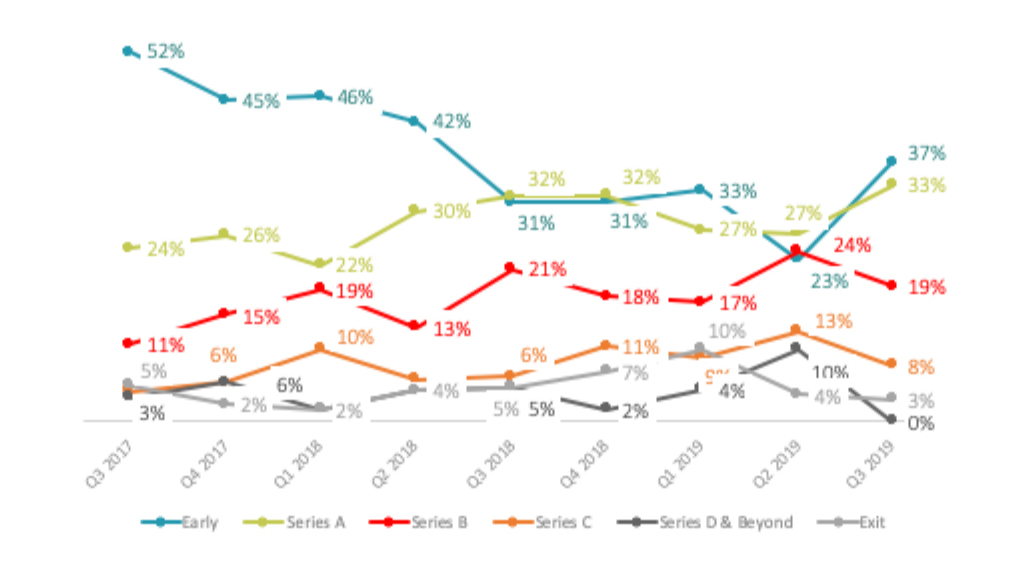 As we suggested in our 2019 mid-year report, are we witnessing Growth stage investors moving up the maturity pipeline in search of deal flow, having saturated the available Growth stage deal flow over the past 12 months?

China and India plummet leaving the rest of Asia to thrive

China vs India vs Rest of Asia by deal volume share

The weakening in the domestic economy and a deteriorating external environment, including both a global slowdown, and the US-China trade tensions, have no doubt played a role in China’s deceleration.

This will be a key topic of the Galen Growth Asia HealthTech Summit 2019 on 13-14-15 November in Singapore.

After a glimmer of hope in Q2 2019 where we saw the India HealthTech ecosystem regain momentum, it experienced a hard landing witnessing its total deal value slump to 87% for the same period. Total deal volume share shrunk to 19% down from 23% in Q3 2018.

India is facing a sharp economic downturn and severe loss of business confidence. Investors alarm over the economic condition is not merely a reflection of a slowdown in GDP growth but also the poor quality of growth. Private sector investment, the mainstay of sustainable growth is at a 15-year low. In other words, there is almost no investment in new projects by the private sector.

SE Asia, which doubled its total funding in H1 2019 compared to the same period last year, continued to be a net winner of the aforementioned trade war.

During Q3 2019, we witnessed a continuation of SE Asia’s momentum accounting for 12% of all deals, up by 1% when compared to the same period last year.

HealthTech Alpha classifies each HealthTech venture by its primary solution which we monitor continuously as this does evolve / pivot. Our taxonomy includes 15 distinct clusters (underpinned for further granularity by a total of 42 categories). We track both $ value and volume for each super category to better understand the attractiveness of each.

By the end of mid-year 2019, the Online Marketplace and Medical Diagnostics categories had continued to maintain their top 3 leadership positions by deal value, with Health Management Solutions leapfrogging them into the lead, driven by China mega-deals. 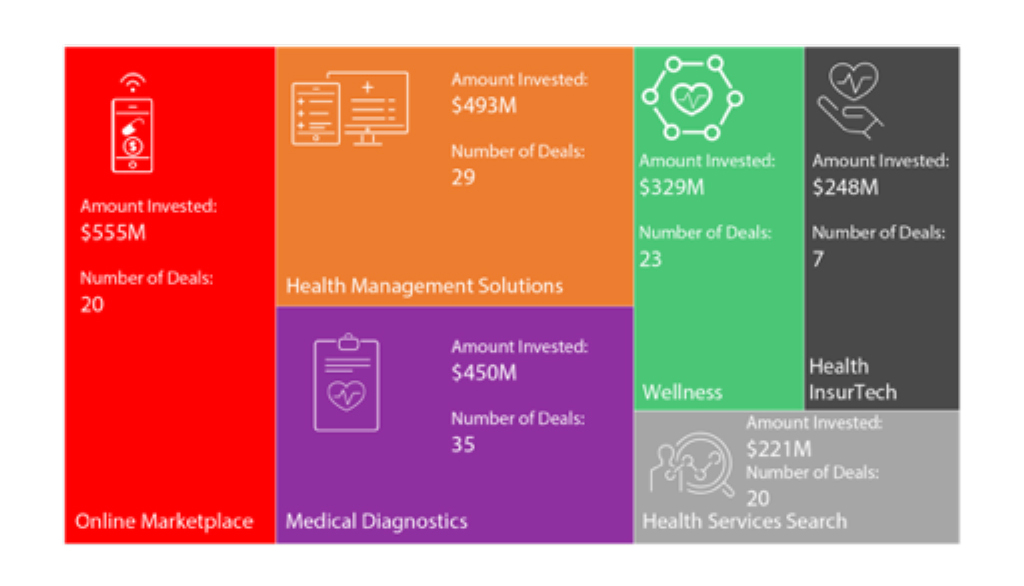 With no mega deals in Q3 2019 (deals exceeding the value of US$100M in size), we consider a shortlist of noteworthy funding rounds to better understand the type of deal driving the top 6 solution categories.

Synyi.ai (森亿智能), a China venture founded in 2016, is a developer of big data-driven AI applications for medical research, healthcare, and patient services. The company has developed a semantic analysis system that is able to standardise and analyse the unstructured records kept by many Chinese hospitals. The medical data management company uses its machine learning and natural language processing technology to collect, model and analyse large-scale medical data.

In July, Synyi announced the completion of a new round of US$36M (approximately RMB 250M) Series C round of funding from Tencent Holdings and Sinopharm Capital.

Halodoc, founded in 2016, an Indonesia-based digital healthcare platform, and the winner of Galen Growth Asia’s 2018 Most Innovative HealthTech Startup, connects customers in Indonesia to over 20,000 licensed doctors in the country for live consultations via its mobile app and website. Services also include fast delivery of medication as well as lab tests.

In July 2019, Halodoc secured funding in a Series B+ round from strategic investors including the Bill and Melinda Gates Foundation, Allianz X, and Prudential. Galen Growth Asia estimates this round to be in the region of US$20M. This round follows closely after the March 2019 Series B raise of US$65M.

LemonCare, a South Korea venture founded in 2017, is a customized patient-focused service platform for medical facilities that manages everything from making appointments to submitting medical insurance claims and transferring e-prescriptions.

After raising a Series A round in April 2019, Neurospace has announced a partnership with capital injection of US$1.6M (approx. ¥170M) with SOMPO Holdings in July.

Meddo , an India venture founded in 2018, partners with doctors to provide comprehensive one stop care for patients, providing all health needs under same roof – starting with consultations, nutrition, lifestyle, cutting-edge lab testing and other health services.

In September, Meddo disclosed a US$3M raise led by SRI Capital with participation from growX Ventures, LetsVenture and angel investors.

This is the Galen Growth Asia Q3 2019 YTD Asia HealthTech Investment Landscape interim report, which is an update to our comprehensive go-to-reference half year reports. These can be downloaded for free at: https://www.galengrowth.asia/research/

GGA has built a portfolio of solutions which enables it to be the catalyst of direct collaboration between enterprises, startups and investors to accelerate the timeline to ROI of their digital health strategy.

GGA has recently opened its European office to respond to the growing demand and needs of its continuously expanding client base of healthcare incumbents, new entrants and investors.

This update is provided for informational purposes only and was prepared in good faith on the basis of public information available at the time of publication without independent verification. Galen Growth Asia does not guarantee or warrant the reliability or completeness of the data nor its usefulness in achieving any particular purposes. Numbers will be updated from to time to reflect information identified after the event. Galen Growth Asia shall not be liable for any loss, damage, cost or expense incurred by reason of any persons use or reliance on this update. This update is a proprietary aggregation of publicly available and undisclosed data and shall not be forwarded or reproduced without the prior written consent of Galen Growth Asia.

4 Reasons Why Asia is the Next Hub of Microbiome Innovation