Cancer Research UK (CRUK) has laid out the second phase of its “Grand Challenge Fund”, an invitation to academic research teams to solve some of the biggest puzzles in oncology.

CRUK is one of the biggest non-profit funders of cancer research in the world,  and the Grand Challenge is one of its flagship products.

The funding is broken up into a series of £20 million awards over five years, and CRUK calls it the ‘most ambitious cancer research grant in the world.’

The funding provides international research teams with funding to try new approaches to cracking the biological and genetic secrets of cancer.

The eight new questions set out in the Challenge aim to ultimately better prevent, diagnose and treat the disease:

In 2016 during the first phase, nine pioneering teams were shortlisted from 56 bids, against seven Grand Challenges.

An independent panel assessing the bids was so excited by the potential of the shortlisted teams, that it called for a new set of R&D quests to answer some of the hardest questions in oncology.

Now, with eight new challenges set, researchers will have six months to assemble teams and submit outline proposals before the shortlisted teams are announced in the autumn.

Cancer Research UK will then seed-fund shortlisted teams. This will allow them to develop full applications which the advisory panel will review before determining those that display the ambition and high quality to receive funding.

Expressions of interest are due on 12 October, and the winning applicants will be announced in autumn next year. 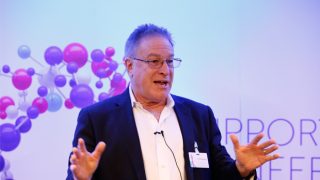 Dr Rick Klausner, chair of the Grand Challenge advisory panel and former director of the US National Cancer Institute, said: “This second phase of the Grand Challenge is incredibly exciting. We were overwhelmed with the teams who came forward for the first round. Now, with a renewed set of questions, we have pushed into new areas requiring new approaches and new collaborations.”

Giving the forgotten generation of cancer patients a voice

In the precision medicine era, the line between products and services is blurred