Prime Minister calls for pressure on drug prices in UK

David Cameron has spoken out against the cost of medicines in the UK, indicating the government could exert new pressure on pharma companies to cut their prices. 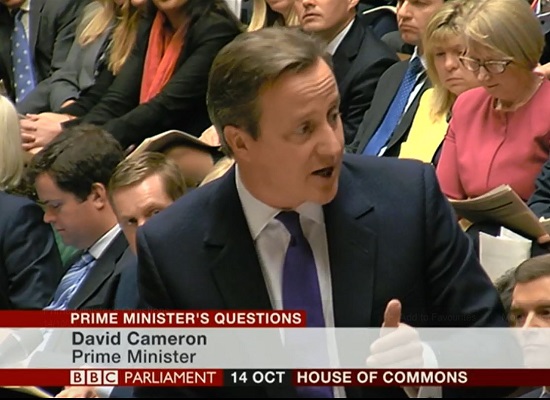 David Cameron speaking in the Houses of Parliament on 14 October

The UK health cost effectiveness watchdog NICE is due to decide on the drug tomorrow, but the Prime Minister was asked if he would ensure patients would have access to the drug.

Indicating that he wouldn’t interfere in NICE’s process, he said: “What we need to do, as well as making sure these decisions are made by clinicians, rather than politicians, is also talk to the drug companies about trying to get the cost of some of these drugs down.”

The question was raised by Conservative MP Cheryl Gillan, who mentioned Archie Hill, a 10 year-old boy from her constituency who has Duchenne’s and who the Prime Minister has previously met.

Mr Cameron added: “This specific drug [Translarna] and others like it can actually cost over £400,000 per patient per year. And that is what the Cancer Drugs Fund [CDF], for instance, has been helping to do, reduce the cost that these companies charge, and we need that in other areas too.”

The Prime Minister’s cost estimate is, in fact, much higher than NICE’s preliminary view – it says the drug is likely to cost around £220,000 per patient per year. However this still makes Translarna a very high cost drug, a trend seen in new rare disease treatments, of which ataluren is one.

Mr Cameron’s comments drew a rapid and critical response from the UK industry body the ABPI, which says the existing industry-wide Pharmaceutical Price Regulation Scheme (PPRS) agreement is very favourable to the country, capping the NHS drugs budget over a five-year period.

Alison Clough, acting chief executive of ABPI, said: “We were very surprised and disappointed to hear David Cameron’s comments today, which don’t recognise the positive contribution the UK pharmaceutical industry makes to the economy, to patients, to Government and to the NHS.”

Clough said the PPRS will pay back nearly £1 billion this year to the Department of Health to support the use of branded medicines by the NHS – contributing to a forecast total of £4 billion in rebates over the five-year period.

The scheme was agreed amid austerity cuts across government, and a tough financial climate in the NHS, and guarantees only very small increases in spending on medicines over the period. Pharma had been promised fewer barriers to the uptake of new medicines, but has been disappointed, as uptake still lags behind the rest of Europe in many therapy areas.

Alison Clough also responded to the Prime Minister’s remarks on the CDF, which is set to be reformed from April 2016. She clarified that it was not set up to bring prices down, but to provide access to drugs not approved by NICE.

“The Cancer Drugs Fund was always meant to be a temporary measure whilst a sustainable solution was put in place,” Clough concluded.

“We urge Government, the NHS and NICE to seize the opportunity of the PPRS and transform the way specialised medicines, including cancer medicines, are value assessed so that UK patients don’t lose out.”

So will the Prime Minister’s remarks signal new pricing negotiations? These still look unlikely for the PPRS, but raising the issue publicly will put more pressure on individual pharma companies to lower prices.

While the government is unlikely to tear up its five-year PPRS deal (which expires at the end of 2018), it is reviewing a parallel system, the Statutory Scheme, which was created for companies who want to opt out of the PPRS. The government announced a consultation last month, aimed at clawing back more money from companies in this Statutory Scheme.

The Department of Health and NHS England are also increasing their use of a tendering system, aimed at driving down cost in areas such as the new hepatitis C drugs.

The government-sponsored Accelerated Access Review (AAR) which aims to help the life sciences industry and boost uptake of innovation in the NHS, is due to issue its interim findings shortly.

However any initiatives adopted from the AAR look increasingly likely to be counterbalanced by renewed cost-cutting measures, as the latest report suggest the NHS is heading for a multi-billion-pound overspend in this financial year.