The chief executive of GlaxoSmithKline has welcomed the breakthrough in talks between the UK and EU27 countries on a transition or ‘implementation’ period.

The outline agreement has been struck with barely a year to go before the UK exits the European Union, and the new deal provides a transition period from 29 March 2019 lasting until 31 December 2020.

The EU’s chief negotiator Michel Barnier called the agreement a “decisive step” in the Brexit process, and allows for the ‘status quo’ to remain for another 18 months after Brexit.

For the life sciences sector in the UK and Europe, the news is very welcome, as it will allow for continuity in all aspects of trade, regulation and migration. 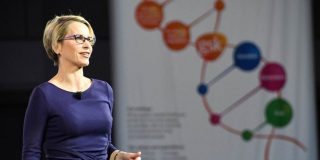 “We certainly welcome this pragmatic approach to transition, it is absolutely critical to secure the supply of medicines and vaccines to the people here and in Europe who need them. But we are also looking forward to more precision on the details of the end-stage of the relationship.”

GSK recently revealed that it is already spending £50 m a year on its Brexit planning, and needs greater certainty to help plan its investments in the UK and Europe.

Walmsley said the long-term priorities were security of medicines supplies and the “right kind of alignment with the regulators”.

The UK-based pharma and biotech sectors stress that ongoing alignment of the UK with the European Medicines Agency from 2021 onwards (after the transition period) is of paramount importance if the UK is to remain a major market.

However the transition deal does nothing to bring this closer to reality. Moreover, the UK government’s insistence that it is leaving the EU single market and the customs union makes this kind of alignment unthinkable from an EU perspective.

Two weeks ago the EU warned there could be no ‘pick and mix’ deal for the UK.

Yesterday’s agreement saw a number of concessions made by both sides, a pattern which is likely to be repeated in the next round of negotiations. Most notable among these was the EU allowing the UK to begin trade talks with third parties during the transition phase; the UK remaining with the EU agreement on fishing quotas and the UK agreeing to the EU’s ‘backstop’ plan for the Northern Ireland border.

Unresolved issues, in particular the seemingly intractable problem of the Irish border, could still derail a deal. The UK government has to steer a difficult course, as too many concessions risks angering pro-Brexit groups within its parliamentary party, while at the same time trying to satisfy business and economic needs for alignment and open trade with the EU.

The next major milestone in negotiations happens on Thursday and Friday this week, when leaders from the EU27 gather at a European Council meeting in Brussels to discuss the post-implementation deal with the UK.