GlaxoSmithKline and partner Innoviva are seeking an expansion to the US label of their Trelegy Ellipta lung drug.

But GSK is already seeking an expanded US label for maintenance treatment of airflow obstruction and reduction of exacerbations in COPD patients.

Trelegy is a key drug for GSK, and analysts predict peak sales in excess of $1billion.  The company needs new revenues in respiratory diseases, as its ageing blockbuster inhaler Advair will face generic competition in the US next year. 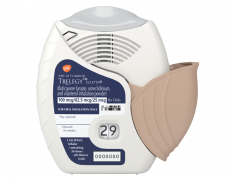 Trelegy could earn up to $1bn in peak sales – good, but not enough to compensate for the Advair/Seretide loss

New CEO Emma Walmsley has said the company would show a keener commercial execution with this and a handful of other new launches and label expansions.

Approval of Trelegy (fluticasone furoate+umeclidinium+vilanterol) in the expanded use could allow use in a wider population of COPD patients at risk of an exacerbation and requiring triple therapy.

Trelegy is aimed at patients who require treatment with three drugs to keep their symptoms in check, allowing them to take their medicine in a daily dose in a single inhaler, rather than using several different inhalers.

It contains an inhaled corticosteroid, a long-acting muscarinic antagonist and a long-acting beta2-adrenergic agonist, delivered once daily in GSK’s Ellipta dry powder inhaler, which is used across the entire new portfolio of inhaled COPD medicines.

This was measured against multiple endpoints, including exacerbation rates, lung function and health-related quality of life.

Michael Agular, Innoviva’s CEO, said: “We believe the IMPACT data will provide clarity to physicians on how to treat patients based on their symptoms and risk profile and that Trelegy Ellipta will play an important role in treating patients who remain symptomatic and at risk of an exacerbation despite current therapy.”

Further regulatory submissions with these data in other countries including the EU are expected in 2018.