Wonder material graphene could be used in medicines of the future to deliver a ‘one-two’ hit to cancer cells.

Graphene is a two-dimensional sheet of carbon that is only one atom thick, and is being researched to enable many new nanotechnologies to be developed, including in medicine.

An international team of researchers has now developed a drug delivery technique that uses graphene strips as “flying carpets” to deliver two cancer drugs sequentially to cancer cells, with each drug targeting the distinct part of the cell where it will be most effective. The technique was found to perform better than either drug in isolation when tested in a mouse model targeting a human lung cancer tumour.

The researchers also found that an anti-cancer protein, TRAIL, can serve as an active targeting molecule to bind directly to the surface of cancer cells, which had not been demonstrated previously. The work was done by researchers at North Carolina State University, the University of North Carolina at Chapel Hill, and China Pharmaceutical University (CPU).

In this study, the researchers attached two drugs – TRAIL and doxorubicin (Dox) – onto graphene strips. Doxorubicin (marketed by Janssen as Doxil) was one of the first ever nano-drugs, approved by the FDA in 1995, and the researchers are looking at ways of developing a ‘second generation’ approach to nanoparticle drug delivery.

“These drug-rich graphene strips are introduced into the bloodstream in solution, and then travel through the bloodstream like nanoscale flying carpets,” explains Dr. Zhen Gu, senior author of a paper describing the work and an assistant professor in the joint biomedical engineering programme at NC State and UNC-Chapel Hill. 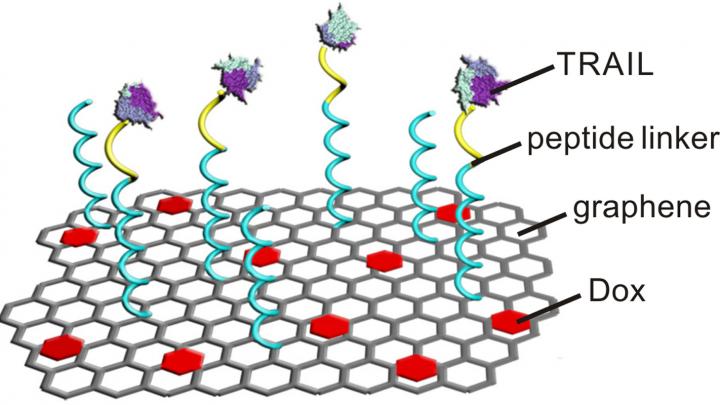 Once in the bloodstream, these flying carpets take advantage of the fact that cancer tumours cause nearby blood vessels to leak by using those leaks to penetrate into the tumour.

After the flying carpet is ‘swallowed’ by the cell, the acidic environment inside the cell promotes the separation of the Dox from the graphene – freeing it to attack the nucleus.

“We’ve demonstrated that TRAIL itself can be used to attach a drug delivery system to a cancer cell, without using intervening material – which is something we didn’t know,” Gu says. “And because graphene has a large surface area, this technique enhances our ability to apply TRAIL to its target on cancer cell membranes.”

The researchers tested the flying carpet drug delivery technique in preclinical trials against human lung cancer tumours (cell line A549) in laboratory mice. The technique was significantly more effective than Dox or TRAIL by themselves, or to a combination of Dox and TRAIL in which the peptide link between the graphene and the TRAIL couldn’t be severed.

The researchers are now looking to secure funding to support additional preclinical studies in order to determine how best to proceed with this new technique.