AZ puts genome editing at heart of its drug discovery

AstraZeneca (AZ) has become the latest big pharma company to become excited by the prospect of gene editing techniques, signing four new deals to deploy the technology across its drug discovery operations.

Over the last couple of years the ability to snip out specific sequences in a gene in order to switch them off or on – or potentially modify their function – has captured the imaginations of academic researchers, and the pharma industry is anxious to tap in to its potential.

AZ wants to use a gene-editing technique called CRISPR/Cas9 to find new drug targets in models of human disease and has forged alliances with genetic research-based organisations in the US and UK to accelerate the process. 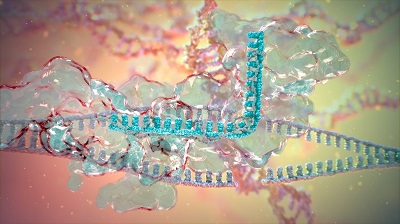 Using CRISPR/Cas9, an RNA guide molecule that locks onto a particular genetic sequence is attached to a nuclease that snips out DNA at a precise location and prompts cellular repair mechanisms that introduce a different gene sequence in its place.

The pharma company will work with the Wellcome Trust Sanger Institute in the UK, the Innovative Genomics Initiative (IGI) and Broad Institute/Whitehead Institute in the US, and laboratory technology company Thermo Fisher on projects relating to “cancer, cardiovascular, metabolic, respiratory, autoimmune and inflammatory diseases and regenerative medicine”.

Earlier this month Novartis bought into the technology via a five-year alliance with start-up company Intellia Therapeutics, while several other smaller companies have been formed to develop research tools and therapies based on the approach, including Editas Medicine and CRISPR Therapeutics.

AZ is taking a somewhat more “open innovation” approach to CRISPR, and has pledged to share cell lines and compounds with its partners and publish its findings in order to contribute to “broader scientific progress in the field”.

“CRISPR is a simple yet powerful tool that enables us to manipulate genes of potential importance in disease pathways and examine the impact of these modifications in a highly precise way,” said Mene Pangalos, who heads AZ’s innovative medicines and early development unit.

With the Wellcome Trust/Sanger Institute, for example, AZ will provide cell lines that can be exposed to a library of CRISP RNA guide molecules and modified so specific genes are switched off. Those cells will provide clues about the action of those genes, said the company.

Novartis invests in gene-editing with Intellia