The Toronto-based company claims the inaugural award of $250,000 for its mobile app, which compiles information about how accessible buildings and other locations are to people with disabilities.

Users of the AccessNow app – which is available for Apple and Google devices – can upload information to an interactive map, which features a traffic light system – green for accessible, amber for partially accessible, and red for locations without access.

According to the company’s website, more than 26,000 restaurants, stores, hotels and more have been pinned by users in 34 countries around the world. 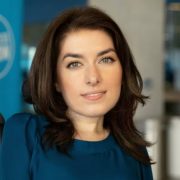 Maayan Ziv, founder and chief executive of AccessNow who is living with muscular dystrophy and has used a wheelchair from childhood, says receiving the Novartis prize was “such as honour”, adding: “Accessibility is a critical component of establishing a welcoming and barrier-free world for people with disabilities, including those living with MS.”

The idea behind the launch of AccessNow in 2014 grew out of frustration about not being able to tell if a location was accessible in advance, and recognition that many people with disabilities rely on a “mental map” of places to help them with their daily activities.

“We have come a long way, but we have so much more to do to achieve equity and inclusion,” says Ziv. “At AccessNow we believe technology plays an integral role in achieving this vision and we are so excited for the next step in our journey.”

The runner-up in the competition is an intelligent plug-and-play robot and app for people with neurological diseases – called Polly – which claims a $50,000 prize.

Developed by US start-up Fly Parrots, Polly “empowers people with mobility and communication challenges to be more connected with the world around them through features like safe navigation, 360-computer vision, smart home connectivity and more,” according to Novartis.

Mobility issues are often the first significant symptoms of MS and can have a profound impact on mental wellbeing and general quality of daily life for people living with MS, says the company.

Novartis adds that supporting these innovations is part of its strategy of going “beyond-the-pill” in MS. The company sells oral MS therapy Mayzent (siponimod) and is also waiting for a regulatory verdict on injectable drug ofatumumab.

The prize is also supported by actress Selma Blair who was diagnosed with MS in 2018 and has become a prominent advocate for people living with the disease and underwent intensive chemotherapy and a stem cell transplant last year.

Happify launches Ensemble DTx for depression, anxiety in US