Where does all the PPRS money go?

The 2014 Pharmaceutical Price Regulation Scheme (PPRS) includes PPRS payments back from PPRS members to the Department of Health. Leela Barham looks at just where that money goes, drawing on exclusive Freedom of Information Requests.

The 2014 PPRS is the latest negotiated agreement between the Association of the British Pharmaceutical Industry (ABPI) and the Department of Health (DH) that indirectly regulates the pricing of branded medicines. In a change to previous agreements, the 2014 PPRS dropped headline price cuts and instead agreed that member companies would pay PPRS payments to the DH if growth in the branded medicines bill for the NHS went over pre-agreed growth rates. With zero agreed for the first two years, it was always a question of when payments would be made and not if.

According to the latest statistics from the DH, payments received by them from PPRS member companies have surpassed £500 million (see figure 1 below). Not only that, but the payments jumped at the beginning of this year and higher payments are expected, compared to the outset of the scheme in January 2014.

That might not be all that much money when you look at the total expenditure of the NHS, but it’s real money and not elusive efficiency savings. After all, according to the Office of Health Economics, the NHS saw growth rates in spend on branded medicines of 3.4 per cent between 2003 and 2011. Although it’s always hard to know what would have been, presumably NHS spend on branded medicines would have grown without the PPRS agreement – predicted in 2014 to have been 2.9 per cent in 2014/15 and 3.9 per cent in 2015/16. Without this growth in the branded medicines bill the NHS should be doing something else instead with that money, which it wouldn’t otherwise have been able to fund (unless it simply saved the difference – hard to imagine that).

So the money is a real boost. Not often does the NHS get a cash injection, especially one that isn’t driven by a headline-grabbing speech from the Prime Minister or the Secretary of State for Health (remember all those announcements about extra funding for A&E?). 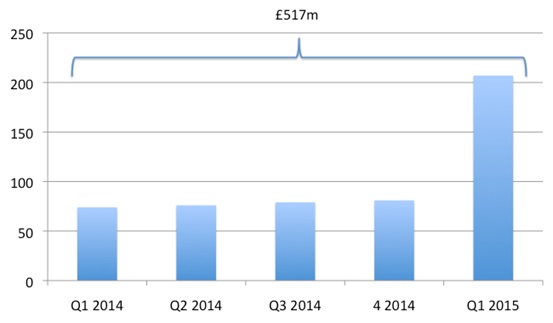 Where does the money go?

It’s not easy to trace the boost in funding and where it goes. But we now know what the shares look like across the UK (see figure 2 below). The money is divided not on the general allocation to the devolved nations, the Barnett formula, but using primary care data on spend on licensed branded medicines. The DH says it uses this as the most consistent data available across the UK. 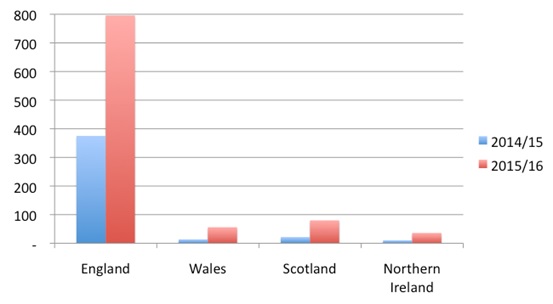 Note: Payments for financial year 2014/15 in the devolved nations exclude the first quarter of 2015

We also now know that PPRS payments in England and Wales go into general allocations to the Clinical Commissioning Groups (CCGs) and Local Health Boards (LHBs), respectively, and in Northern Ireland to the Health and Social Care Board.

In Scotland, PPRS payments are going into a new medicines fund that covers treatments for rare and end-of-life conditions. That’s the most direct link between PPRS payments and medicines across the UK, and it seems that it’s pretty much all the PPRS payments too, with no top slicing as we’ve seen in the past. Even the Cancer Drugs Fund (CDF), supposedly for cancer drugs, was top sliced in the early days when it was under-spent; those days are now long gone.

That means that it’s only in Scotland where we have an idea of what the money is actually spent on (although people debate whether it should be spent that way or not).

Surprising, too, is that NHS England (NHSE) can’t say how much was spent from the £13+ billion allocated to specialised services on medicines. This spend would include some of the drugs to treat rare conditions, which can be expensive. So how can it – and anyone else, like CCGs – know if the amount that they allocate to their own specialised commissioning budget from PPRS monies is fair? And that what the CCGs receive is fair too?

Similarly, NHSE says it doesn’t know how much PPRS monies it receives because it’s factored into its general allocations. Maybe someone at NHSE should look at what the DH says: ‘in setting allocations for NHS England for 2015-16 … the revised estimate is £796m’. NHSE can and should acknowledge this money as a contribution; and since rising, it’s a noteworthy amount.

Where should it go?

The tricky issue, because it’s not on the face of the agreement, is where all that money should go? On the one hand, it might make sense to use the money to pay towards use of those medicines that are proven to be value for money, such as those positively appraised by National Institute for Health and Care Excellence (NICE) and the Scottish Medicines Consortium (SMC). On the other, spending more on medicines could result in more payments from companies, presumably something that companies are less keen on.

Given a much broader debate on getting the ‘best bang for the buck’ in the NHS (are you better off spending money on nursing, medicines, prevention or anything else?), and a particularly tortuous debate on the threshold for cost effectiveness used by NICE, it’s not clear what is best for patients.

But surely a little more transparency and accountability could support debate? Especially at a time when the Accelerated Access Review is exploring the best way to get ‘good’ innovation to patients in the NHS and where it might not only be the money that’s the problem, but where it undoubtedly plays a role?