What’s the best way to tackle some of the biggest practical problems faced by people with respiratory diseases such as COPD and asthma?

Conventional thinking is that these complex issues require patience, and need long-term investment from separate teams of company researchers to produce solutions.

But what if diverse groups of people with different types of expertise come together to ‘hack’ these problems, and try to find faster, more patient-centric solutions?

That’s the rationale behind recent Breathe Respiratory Hackathons, which aimed to re-imagine existing medical devices and hardware for COPD and other respiratory illnesses.

The Hackathons took place in September with three locations – Boston, London and Haifa, Israel, taking part over one weekend. The event took its inspiration from hack events in IT which use open sharing of ideas to generate fresh approaches to old problems.

Sponsored by US patients’ organisation the COPD Foundation and Novartis, a long-term player in respiratory medicine, the event also plugs into the potential for wearables and other digital health solutions to improve the daily lives of people with these conditions.

Mac Tuncer and Laura Kennedy were behind the London event, which was hosted at Imperial College.

“The vision is to ultimately improve the lives of people with respiratory diseases,” Mac Tuncer explained. “This was an opportunity to be creative and think of innovative solutions to old problems that haven’t really been solved.”

Each event saw a handful of teams working at a rapid pace over 48 hours, hacking existing medical equipment, such as CPAP devices (ventilators for breathing problems), oxygen concentrators and sleep monitors.

Mac said the hackathon focused on ‘smartifying’ existing devices – making them digitally connected, improving their user-friendliness, to work across platforms and to monitor and potentially use data analytics to better manage the disease.

Larissa Kunstel-Tabet runs Imperial College’s Advanced Hackspace, a regular workshop which tries to find new solutions for problems across different disciplines. Her team worked with Mac and Laura to organise the London event.

She pointed out that the hackspace focuses on events based on hacking hardware, as this tends to produce the greatest level of new thinking and innovation.

Laura Kennedy said researchers in healthcare often have to shelve ideas and problems because they hit obstacles they can’t overcome.

“But you can revisit these ideas, introduce new approaches from other sectors which have solved similar problems. A hackathon lets you create a melting pot of ideas, with different disciplines bringing their own ideas and new technology, and suddenly there’s a solution to a problem we thought was unsolvable.”

According to Mac one of the complicating factors is that COPD and other respiratory diseases disproportionately affect the less-well-off members of society and people from the developing world.

“This makes it difficult for them to access technology, so we needed to bear that in mind as well when coming up with concepts. But we think these digital technologies are a massive opportunity to reach a higher level of value for patients.”

The winning concept at the London event was Pro-Lung Experience, an educational game to spread the word about the dangers of smoking and COPD among children. 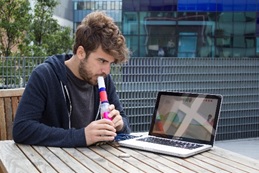 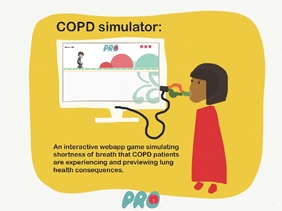 Devised by Team Krypton, a not-for-profit team from London Imperial College, the game was conceived as an immersive experience for children in the age group when they tend to take up smoking. Pro-Lung Experience includes a breath-operated COPD simulator controlled computer game and a lifestyle board game explaining lung health through a visual language understood globally.

The aim of their project is to prevent respiratory diseases, especially COPD, through well-timed, engaging education. Analogue statistics suggest it could also help increase funding to COPD research by raising awareness. See more about the project, including a video demonstration here.

“The Pro-Lung team was a very diverse set of people: coders, designers, including a fashion designer, someone with a medical background as well,” stated Larissa.

“They produced three outcomes in a very short time, and they had a physical tool 3-D printed which they used as part of their digital game. The concept was that a child playing the game could experience what it felt like to suffer from COPD, and see how restrictive it can be to everyday life.”

There was lots of interest in wearable devices and bringing them round to feed back to the patients, clinicians and carers on the status of the patient’s condition.

COPD Cope was the winner from the online vote by patients – a ‘smart’ earring to monitor oxygen saturation, connecting via Bluetooth to a smartphone application to support COPD patients. The app will provide self-care strategies, such as exercises, to help patients manage on a daily basis. The continuous connection between the oxygen saturation device and the app allows a constant exchange of personalised feedback on the patient’s health. The team behind it reports that, by collecting the data, the device creates an interactive experience for patients, with the aim of empowering them and giving them greater control over their breathing.

Mac explained that the practical need for such a device was demonstrated, by accident, at the event at the Massachusetts Institute of Technology (MIT) in Cambridge, Massachusetts. “One person with COPD was taking part and had brought her oxygen canister, but realised there wasn’t enough oxygen for the whole day, so she reduced the flow to make it last longer.

“But as the day wore on, they put a pulse oximeter on her finger and found her blood oxygen value was dangerously low. Of course they arranged for some extra oxygen supplies, but this illustrates a common problem in these conditions; patients are often unaware of when an exacerbation is coming. If your blood oxygen levels drop, it also affects your brain, which means people can’t think straight in those situations, making it even more dangerous.”

The winning ideas from each of the three events were subsequently showcased at the European Respiratory Society (ERS) Conference in Amsterdam on 27 September.

This allowed frontline clinicians to give their perspectives on the concepts, and to outline where they considered the greatest unmet needs lay. Interestingly, clinicians at ERS chose a different winner: a device which enabled devices to connect and ‘talk’ to each other – the kind of digital interoperability and exchange of data which is becoming a major issue as the numbers of medical devices increase.

Laura commented that it was important that the hackathon helped to promote practical problem-solving, but also more ‘blue skies’ thinking.

“Having a working prototype which people can interact with is often ideal, but we don’t want to limit people at all, because sometimes those really wacky, left-field ideas are the best concepts, and go on to become great things.”

One such concept was ‘A cup of O’ (O for oxygen) which tackled the fact that people with COPD have to use huge and very heavy oxygen canisters. This team looked at developing a device which would be the size of the cup, very portable and light.

Larissa commented: “This is a great, very simple idea, but still very much a concept, as the technology isn’t there yet. But it shows the team were looking at real patient needs, and trying to re-imagine technology from that perspective.”

Hackathons do sometimes suffer from the fact that good ideas are produced but then never taken forward, but the Breathe initiative will help maintain the momentum.

There are definitely going to be some conversations about progressing these ideas, with some real next steps for the team, and interest from the sponsors.

The Breathe initiative has among its next steps to find a way of connecting all these devices together – and that is the original, overarching concept behind the hackathon.

Boston, London and Tel Aviv are all looking at ways of keeping the project going over the next 12 months, which might be through student projects, or industry collaboration, for instance.

Everything that has come out of the hackathons is ‘open source’ information, so all of the outputs are there for anyone to use and develop.

At the same time, the teams of inventors are able to file patents and intellectual property from ideas they generate or bring to the events.

“It’s important for these individuals to get the chance to push ahead, and make their concepts a reality,” said Mac. “That’s what innovation in this field is all about – you have to get it to the stage where it’s really making a difference to patients.”

He can be contacted via: andrew@pharmaphorum.com