Regeneron and GlaxoSmithKline have joined forces to generate genetic sequence data from the 500,000 volunteers in the UK’s Biobank database.

The companies hope the initiative will give insights to support development of new medicines for a wide range of serious and life threatening diseases.

The success rate of medicines entering clinical trials is still only 1 in 10, with the remaining 90% never reaching patients.

This high failure rate is caused in many cases by an incomplete understanding of the link between the biological target of a drug and the disease.

Medicines developed using genetic evidence have a much better chance of success, the companies said.

They will sequence the data from the government-backed Biobank, an ambitious project which began collecting genetic data from 500,000 volunteers in 2007, and aims to increase understanding of the genetic basis of diseases.

Biobank will track their health for a period of 25 years or more, and since 2012, external researchers have had access to anonymised records from the database.

The Regeneron Genetics Center (RGC) and GlaxoSmithKline have committed an investment to sequence the first 50,000 samples by the end of this year.

RGC is one of the world’s largest human genetics centres and will have sequenced the full 500,000 samples within three to five years.

After the end of the exclusivity period, sequence data will be made available to the broader scientific community, and findings will also be submitted to peer-reviewed journals.

GSK has significant expertise in genomics and is incorporating advances in this scientific field into its drug research programmes.

It has a specialist drug discovery team focused on genetically-validated drug targets, who work across the company’s R&D organisation, and through external collaborations.

Over 60% of the targets selected for new GSK drug discovery programmes in 2016 are supported by human genetic evidence. 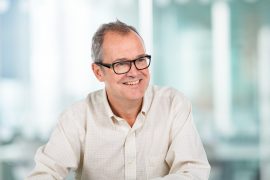 GSK’s president of R&D, Patrick Vallance, said: “Having been actively involved in UK Biobank as a board member since 2013, I’m delighted that, through our collaboration with Regeneron, we can enrich this resource for the wider scientific community and also provide potential new opportunities for companies such as ours to develop new medicines for patients.”