Emboldened by two successful drug launches, Ipsen’s new CEO says the company is looking to bolster its pipeline with drug acquisitions to maintain its run of form.

David Meek, who took the job in July last year, has set a target of a new launch, or “meaningful” new indication for an existing drug every year, a new strategy he outlined in a press conference in London today.

The Paris-headquartered company recently launched two niche oncology drugs, and is pursuing this specialist in-licensing strategy to fuel its growth.

Ipsen acquired global rights for Merrimack’s pancreatic cancer drug Onivyde last month, although Shire has rights outside the US. Ipsen also has the ex US and Japan rights to Exelixis’ Cabometyx for kidney cancer. 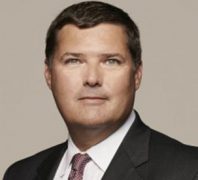 Meek told the conference that thanks to the new acquisitions and a generally stronger performance across the rest of the business, 2020 sales are expected to exceed 2.5 billion euros, with profit margins exceeding 30% of sales.

This is around half a billion up on previous forecasts, and the question now is what Ipsen will buy to ensure its winning streak continues.

Sales have been growing at greater than 10% for two consecutive years, and are expected to accelerate this year as the new drugs start to gain traction.

Ipsen plans to focus in three key therapeutic areas – oncology, neurosciences and rare diseases, but it was the company’s oncology portfolio that dominated Meek’s discussions with journalists at the press conference.

The obvious candidate for an acquisition is to acquire remaining rights to Onivyde (irinotecan liposome injection), which are licensed to Shire.

As part of Shire, Onivyde looks like something of an outlier, the only significant cancer drug among a large portfolio of rare disease drugs and therapies.

With Shire’s focus on rare disease, an obvious choice would be to buy up the remaining rights to Onivyde, giving Ipsen complete control of the product and its development.

Under the existing deal, Shire will help develop Onivyde in three indications – and has already committed to development in pancreatic cancer and small cell lung cancer.

This leaves two more reasonable options – colorectal and ovarian cancer – and although Meek said that the deal is working for Ipsen in the short term as Shire will help fund the trials, it remains to be seen whether Shire is really interested in Onivyde in the longer term.

Meek said: “I think it is positive economically, because we are not paying for 100% of the clinical trials, it is a good thing for us.”

Buying the remaining rights to Onivyde will probably cost Ipsen about a billion dollars – within the company’s financial reach, especially if it does the usual pharma trick of paying in instalments as various different regulatory and sales goals are met.

While Meek didn’t give much else away about Onivyde, he was more open in discussions about his plans for Cabometyx.

Ipsen and partner Exelixis are already developing Cabometyx (cabozantinib) in combination with Bristol-Myers Squibb’s Opdivo (nivolumab) and Yervoy (ipilimumab) cancer immunotherapies in genitourinary cancer, and the company is interested in further combinations.

US biotech Exelixis is focused on cancer and considered less likely to sell the remaining rights to Cabometyx.

In the meantime, Meek said that Ipsen is not limiting its hunt for new R&D assets to cancer immunotherapy. “We are agnostic… we’re looking at all assets with new mechanisms of action that improve response rates of patients with cancer,” he said.

BMS strikes back against Merck in EU oesophageal cancer market