Today is World Diabetes Day, and the theme for 2014-16 is healthy living and diabetes.

The International Diabetes Foundation’s (IDF) Diabetes Atlas shows 382 million people are living with diabetes worldwide. By 2035, 592 million people, or one person in 10, will have the disease. A further 316 million people are currently at high risk of developing type 2 diabetes, with the number expected to increase to almost 500 million within a generation.

This year, people are being urged to choose healthy breakfast options, including low sugar, high fibre cereals, wholegrain bread, fish or eggs. Diabetes.co.uk is encouraging those with diabetes to raise awareness by sharing their #bloodsugarselfie for #WorldDiabetesDay on its Facebook and Twitter pages, featuring a picture of their blood glucose meter.

Lifestyle changes are important both in the prevention of type 2 diabetes and the effective management of diabetes to avoid complications. 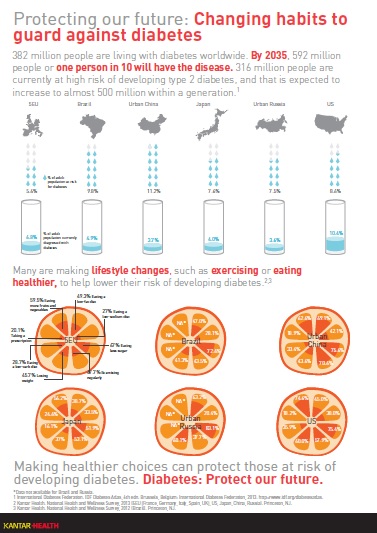 However, the research also found many people who are at risk for developing diabetes are taking steps to try to prevent the disease. The at-risk populations most likely to take action to prevent diabetes are in China and the US, where 56 per cent and 54 per cent, respectively, are making such moves. Japan has the lowest number of at-risk patients taking preventative steps, at only 30 per cent.

World Diabetes Day was created in 1991 by the IDF and World Health Organization in response to concerns that diabetes was an escalating health threat. It takes place on 14 November as this was the birthday of Frederick Banting who, with Charles Best, first conceived the idea which led to the discovery of insulin in 1921.

Although there is still no cure for diabetes, much research is ongoing. For example, in October, researchers at Harvard University in the US brought hope to type 1 diabetics, when they published a paper showing that they had created insulin-producing beta cells in the laboratory in large enough numbers for transfer into humans. However, challenges remain, both in keeping beta cell treatments alive and working in patients and also in preventing them being destroyed by the body’s immune system.

A team at King’s College London and Guy’s & St Thomas’ Biomedical Research Centre has demonstrated that certain immune cells can protect the beta cells against the attacking immune system. Quantities of peptides or proteins that stimulate the protective cells were found to modify the immune response in a potentially protective way. However, the treatment is only suitable for those at risk of developing the disease or those at diagnosis, as at that point beta cells retain some of their insulin producing ability and could prevent the condition developing.

In addition, researchers at the University of Florida have found a combination therapy that could benefit type 1 diabetics. Although dosing with antithymocyte globulin (ATG) and granulocyte colony stimulating factor (GNCF) separately has been unsuccessful, when given together to patients with some beta cell function, the researchers found that, after 12 months, their ability to produce insulin had not reduced.