Your health, yourself: Thiery’s technotraining

In this the first of a new series by Ogilvy CommonHealth Worldwide on the quantified-self movement, we meet Thierry and hear of his specific health concerns in training for a charity run and how he uses tracking devices to help him meet his fitness goals.

Over the course of this series you will be introduced to Thiery, Marta, Claude, Dana and Harry – each of whom (like most of us) have specific health concerns to deal with and / or wellness goals to reach. As both consumers and patients today, they have access to a wide range of personalised technology that promises to smooth their path to wellbeing. But whilst in theory these individualised offerings are more effective than traditional approaches, in reality success is far from guaranteed. It seems that even though health information is readily available at the touch of the button or a swipe of the finger, it is rarely packaged in a way that is truly relevant and meaningful to us as consumers.

Meet Thiery. He’s a 32-year-old social worker who is proud of his university education and what he considers his ‘digital-savviness.’ He enjoys sport but he’s no fitness fanatic – since graduating, the daily gym workouts have dwindled to an occasional run around the block. Like most of us he knows he should do more, so when friend Dan suggests a fun run for charity it proves the perfect opportunity to get fit quick.

Day One and he turns to his trusted smartphone for inspiration. Within a couple of clicks he has downloaded a free pedometer app, which keeps him going for a week or so – until he spots Dan’s wearable fitness tracking device. One trip to the store and €100 later, a similar gadget is his. Thiery is pretty chuffed with the purchase – it tracks his steps, the stairs he climbs and, when he’s back, his sleep patterns. Synced up with his laptop and mobile, the device displays all his data in a handy dashboard, allowing him to input his daily food intake and rewarding him with a collection of goal orientated ‘achievement’ badges. Dan, of course, is still one step ahead – his device feeds into a social networking site for runners where he tracks progress against others and thrives off ‘friendly’ peer competition. But Thiery’s not bothered. The daily miles are increasing and he’s right on track to complete the 13 miles in a respectable time. Well, OK, he’ll admit, it would be pretty great if that time was a few seconds faster than you know who’s…

Thiery’s in good company. Thanks to a rapidly growing mobile health industry that currently boasts more than 40,000 health and fitness apps1, his experience is becoming increasingly commonplace. In 2012, 38% of health app users tracked exercise, fitness or heart rate2 and by 2016, the market for sport and fitness apps alone is expected to reach $400m, with apps for wearable fitness devices being a driving factor 3,4. Big manufacturers like Nike are sharing shelf space with smaller independent brands like Fitbit, and new names are arriving on the market every day.

But do these personal tracking devices work? Well Thiery certainly thinks so, and the data seems to agree. Fitbit say that by seeing how much they move in real time, users walk 40% more each day to hit the recommended 10,000 steps a day5. And doctors also approve. In 2012, 90% of physicians surveyed in the US thought tracking fitness was a good thing, with 40% thinking it could reduce the number of visits needed to their office, freeing them up for other patients6. But let’s not forget that Thiery has done his research, seeking out reputable apps and devices and paying for the ‘best’. He has shown commitment to his goals and put in the required legwork – creating his profile, carrying his device, syncing up his app and uploading ongoing data. What about the rest of us? For those less willing or able than Thiery to put in the required effort or resource, reaping the rewards is more of a challenge. Firstly, there’s the cost. Whilst Thiery had the cash to buy his top of the range device, for others the price of such tools (up to $200) may be prohibitive. Then there is the question of effort and motivation. Thiery has a fun run to prepare for and a competitive best friend to beat, but without these specific goals and ambitions, many people lack the self-discipline to make the most out of a tracking device. Because of this, no matter how sophisticated the technology, most personalised trackers fail to impact the overall fitness of an individual or society. In fact, when Brigham Young University in Utah analysed 127 such popular products they found that the majority fell short of achieving this goal7.

Will more of us be successful in the future? Well the fitness tracking market seems to be aware of the potential barriers created by lack of user motivation or engagement, and are already attempting to innovate the problems away with a variety of ‘nudge’ techniques.

One new product, ‘Withings Smart Activity Tracker’, will send you push ‘buzz’ alerts if you have been too inactive. And the KickStarter app ‘Zombies, Run!’ turns exercise into a game – you run not because you want to get fit, but because you want to reach safety and avoid total zombie apocalypse.

Where might this innovation lead to? Well if digital fitness solutions are really going to make a difference to our collective health, they need to break out of the zeitgeist. They need to make themselves accessible and attractive to the population at large, most of whom are not so ‘digitally-savvy’ (or affluent) as our boy Thiery. What about a gadget designed for Thiery’s elderly aunt that encourages her to walk when she usually takes the bus? She’s never touched a computer but the device could send information directly to the manufacturer, who aggregates the data and posts it on to her as a handy print-out. The best solution is not necessarily the most technological one.

Fitness tracking manufacturers will also need to start collaborating not just with gaming app developers but also with social scientists who understand how to bring about behaviour change. An ideal future scenario for Thiery would be one where tiresome manual input has been eradicated entirely. Fully micro-chipped, his data will be automatically digitally aligned – no effort required above and beyond the hard work he puts into exercise. Instead of merely explaining how fit he is in ‘numbers’ and ‘shapes’, a more meaningful dashboard could provide an (easy to interpret) holistic output that combines medical and injury history, genetics and biometric data. And what if fitness product providers started working more closely with specialist healthcare providers and device makers? Such cross-fertilisation could result in truly useful tools that track fitness alongside other health metrics, such as blood sugar levels or asthma medication adherence.

“The best solution is not necessarily the most technological one.”

That’s not all that tomorrow may bring. What if national healthcare systems were able to benefit from the information provided by these digital tools and devices? What if every time Thiery goes out for a run, the chip in his wristband feeds real-time data directly to his GP, allowing his healthcare provider to track and monitor health and fitness from afar? Potential problems could be identified before they arise, potentially eliminating the need for some face-to-face consultations. Statistics for whole cities and regions would be readily available – effectively providing scientists with large-scale, cost-effective, ‘real time’ epidemiology studies.

And whilst Thiery doesn’t consider himself ‘army fit’ just yet, he might find that future employers use tools similar to those already introduced by some national defense organisations. ‘AF Tracker’ monitors servicemen’s exercise drills and progress, helping everyone keep an eye on physical fitness levels. Why wouldn’t the government start checking similar stats for those working in health, teaching or social care? If they do, Thiery will be ready. He’s still diligently entering data and the big race day is drawing closer… but will he beat rival Dan? Keep those fingers crossed! 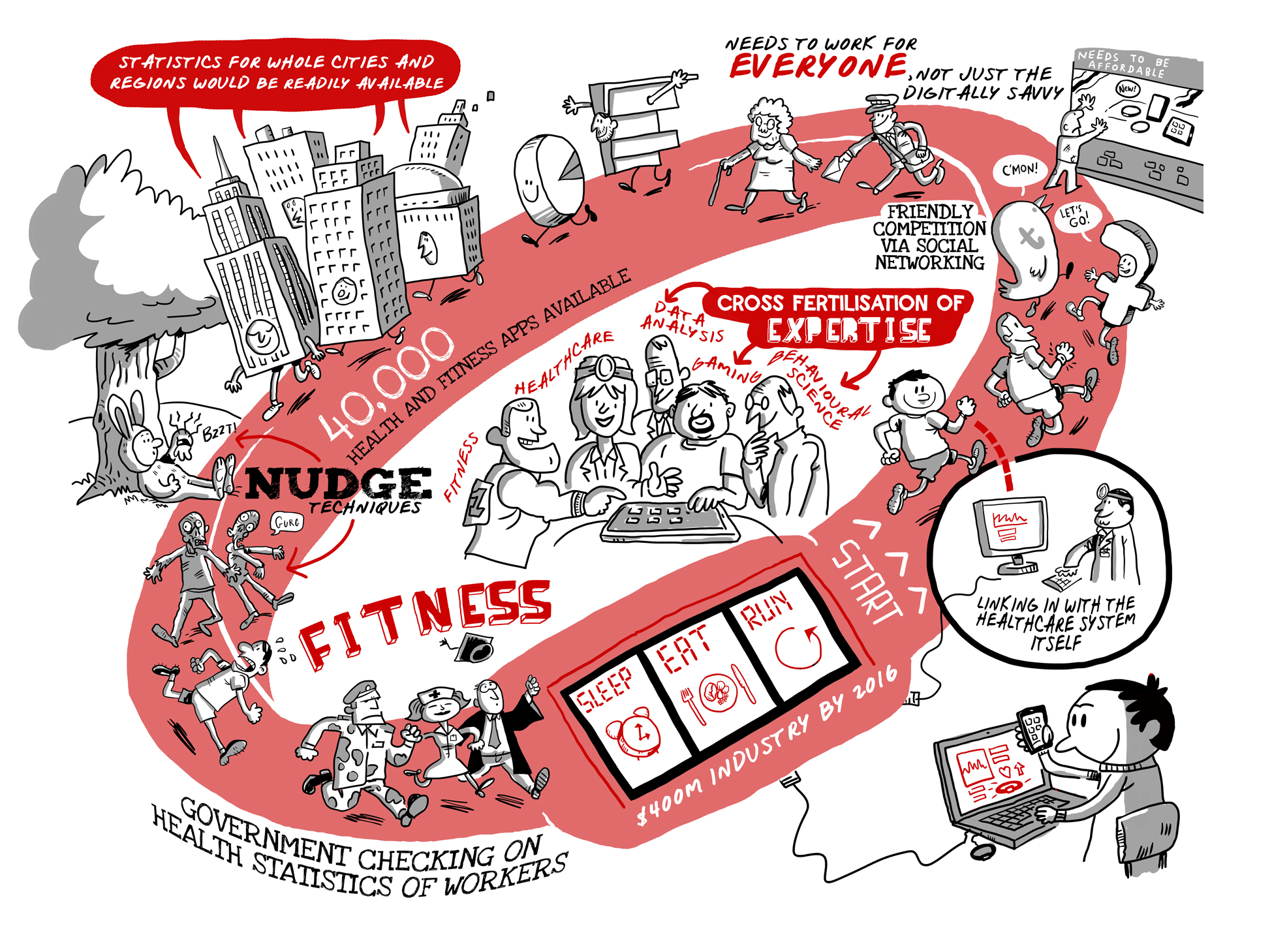 • Personal fitness tracking is a thriving sector that is growing by the day.

• Overcome lack of consumer self- discipline with creative ‘nudge’ techniques

The next article in this series ‘Your health, yourself: Marta’s nutrition mission’ can be viewed here.

Closing thought: What is your experience with personal tracking devices?