The American Society of Clinical Oncology 2016 annual meeting (ASCO 2016), held at the beginning of June, may seem like a distant memory to some, but it’s still making me think about where medical conferences are heading, and the sometimes testing relationship they hold with the pharmaceutical companies, which are critical financial sponsors.

There is no doubt that medical conferences like ASCO 2016 are a core event on the calendar for physicians – an opportunity to digest new clinical data, ruminate with their colleagues and potentially determine new treatment pathways. But digital engagement – in particular social media – has dramatically impacted the way in which information is consumed from these events.

Where doctors cannot attend (an increasing problem in today’s busy and ever more regulated world), there is now the opportunity to follow what is coming out of the event virtually, via social media and an array of healthcare-related publications and individual blogs. This has also created broader interest from other parties – most notably the patients themselves – to follow the conferences. For example, looking at this year’s event on Twitter, there were more than 16,000 people Tweeting almost 70,000 Tweets over the five days of the meeting.

This has created significant interest from the pharmaceutical industry in tapping into the online narrative around medical conferences and, as they don’t get much bigger than ASCO, it serves as a good example of how the industry is engaging.

So this year, pharmaphorum decided to take a closer look at the social media coverage around ASCO and understand what it could tell us about how the industry is engaging – through the eyes of both physicians and patients.

Not ones for relying on purely abstract analysis, we decided to run a roundtable-style webinar in late June, which featured four ‘experts’, each with a vested interest in social media, but coming at ASCO 2016 from different perspectives. These were:

And their conclusions? Well, if the webinar was a report card on pharma engagement around medical conferences then I’m afraid the teachers’ commentary might read ‘could do better’. You see, in the rush for share of digital voice at this year’s ASCO 2016, the pharmaceutical industry took over the Twitter conversation to such an extent that it certainly got noticed by the other stakeholders, and not necessarily in the right way. With hefty budgets at their disposal being steered towards promoted Tweets, pharmaceutical companies are running the risk of being seen to simply spam the Twitter feeds – and it’s starting to create more negative feedback than positive.

At this point, the industry has three choices:

Carry on doing what it’s doing

While I’m not saying that a sample of n=4 is necessarily robust in relation to a conference that features circa 30,000 physical attendees, given the gravitas and experience of our panel it would seem foolish to ignore their message that pharma needs to change. If the industry is seen to be spamming digital conference coverage, rather than contributing value, then two things are likely to happen. First, while no-one (including medical associations), strictly speaking, ‘owns’ a hashtag like #ASCO16, they can exert considerable influence to impose penalties on companies seen to abuse the system, including potentially disrupting privileges at the physical event. In addition, online communities are notoriously good at self-moderating and, if the oncologists and epatients turn against pharma, they will find a way to simply block them out. I would venture this would not be good for anyone – industry, medics or patients. 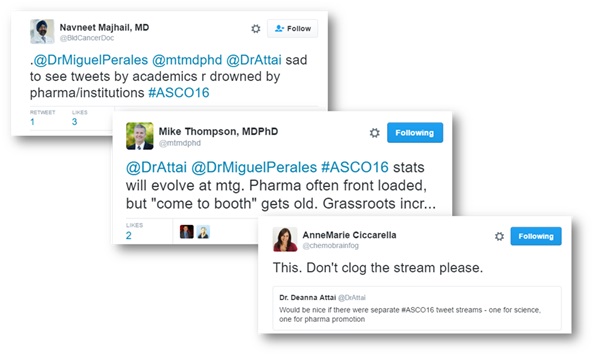 Avoid/keep away from digital engagement

While it might seem odd in 2016, some companies are doing exactly this and some oncology-focused pharma companies were still absent from the Twitter stream this year. They may well cite articles like this as their justification for doing so, but can we really blanket dismiss social media in 2016? I don’t think so – it’s not the channel that’s the problem, but how it is being used. It’s analogous to banning all cars because of one dangerous driver.

It seems the best option is for the industry to take on board what this panel is describing and change the way it approaches coverage of medical conferences. For me this revolves around three key areas:

For me, it’s a pretty simple choice for the industry – collaborating more closely with the medical associations who run these meetings and the healthcare stakeholders who are interested in them to produce a virtual experience that meets everyone’s needs is the only sensible route. The alternative leaves pharma out in the cold, digitally shouting into the ether.

It’s certainly an area that pharmaphorum will be covering quite closely in the future and, of course, working with our industry partners to address, so stay tuned and, until next month, stay well.

Paul Tunnah is CEO & Founder of pharmaphorum media, which drives better communication, connection and collaboration between the pharmaceutical industry and other healthcare stakeholders. Its suite of services, from publishing (www.pharmaphorum.com) to its healthcare engagement agency (www.pharmaphorumconnect.com) are underpinned by the common strengths of extensive global networks, a firm finger on the pulse of changing market dynamics and deep expertise in creating engaging, relevant media.

Have your say: How should pharma be Tweeting at medical conferences?

Tunnah’s musings: put the You back into digital health