The future of the UK pharma market: Part One: the global context

The UK's reputation as a problematic, slow uptake market doesn't capture the whole picture – it is a pioneer in many respects, and still a key market for new product launches.

Over the last 15-20 years, the UK has come to be seen by some in the global pharmaceutical industry as a problematic, low growth market which has erected many barriers to market access for new products. This gloomy picture has looked even worse when compared to the spectacular growth promised by emerging markets.


"Once you start analysing the data, it becomes clear that the UK does still matter very much - it is one of the key global markets for new innovative products."

But while these perceptions are based in reality, they don't capture the whole picture. Once you start analysing the data, it soon becomes clear that the UK does still matter very much - it is one of the key global markets for new innovative products.

Moreover, the UK is at the leading edge in a few crucial fields: the rise of digital media in engaging patients in healthcare choices, and in generating and using real world data to optimise healthcare. Companies which can embrace these developments in the UK will give themselves a competitive advantage, and will help uptake of their innovative products in the UK market.

The global pharmaceutical market is forecast to grow 4-7 per cent CAGR (Compound Annual Growth Rate) to 2018, to a value of $1.25 trillion, measured at a list price level prior to rebates and discounts. 2014 is a landmark year because the value of the total market will be passing the $1 trillion mark for the first time.

The sector has now passed through the wave of major patent expiries of older small molecule blockbuster drugs (such as Pfizer's Lipitor) and has now moved back into modest growth in the established markets.

The forecast for this group of markets is for 2-5 per cent growth in this period, and the UK is expected to be within this average range. The one developed market forecast to deteriorate over the period is France, with growth rates lower by 1 per cent.

However the picture isn't quite as clear cut as these figures might suggest. Firstly, there has been very strong deceleration in the pharmerging markets – China was growing at around 25 per cent a year, but for the next five years will drop to 11-14 per cent, mainly because China's government is exerting increasing pressure on the prices of off-patent brands.

Looking below the total market picture, however, we find a dramatic reversal of attractiveness. New Chemical Entities (NCEs) are the innovative lifeblood of pharma. When we examined where NCEs get their early sales from, accounting for their often later launch in the pharmerging markets by comparing first year and fifth year sales within each of 16 top developing and pharmerging countries, we found the top six pharmerging markets accounted for just 3.5 per cent of first year sales and 2.5 per cent of five year sales. So while they are growing fast, emerging market growth is generally in low cost off-patent medicines, not the new innovative products. 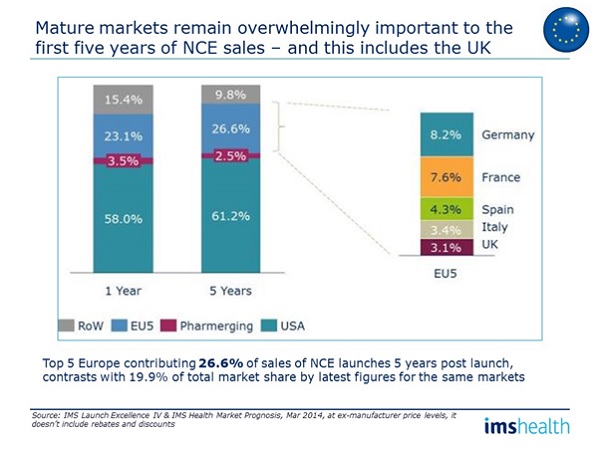 Five years post-launch, the UK contributes more to the sales total for New Chemical Entities than all those six pharmerging markets combined – 3.1 per cent. So while the UK market is challenging for new launches, it is still a vital launch market for new products.

Global trends: the rise of specialist products and biologics

Recent years have seen specialist products and biologics become star performers which have sustained overall industry growth, and it is the established markets of the US, Europe and Japan which have provided most of this growth. Specialist products can be either biologics or small molecules, but they cater for specialist or rare diseases and generally carry a high price. The most notable example of this trend in 2014 is Gilead's hepatitis C drug Sovaldi, which has established a new record for the best ever launch, earning $2.27 billion in Q1 sales this year.

The other story of the last decade has been the rise of the biologics. The most obvious example of this is AbbVie's rheumatoid arthritis treatment Humira, which is now the world's biggest selling drug.

Another major development is the huge increase in innovative products coming from smaller, research-based pharma and biotech firms, and the sharp decline in innovation arising from within the top 10 companies.

These smaller companies are now launching their own products, because they don't need huge salesforces or a global footprint to reach a specialist market: specialist doctors and their patients in the US, Europe and Japan can be covered effectively with a small but well-trained specialist salesforce.

This, of course, creates more competition for the big pharma companies, who will be up against leaner and possibly more agile competition.

"Countries such as Italy, France and Germany are playing catch up with the UK's market access agenda"

Within this global context of a changing and dynamic market, what is the outlook in the UK – is it a sustainable market, and how will it compare to other markets?

Over the last decade, the UK has moved from being significantly below average in terms of the proportion of the market new products claim, to now being close to the average. This is in an environment where all established markets decline in this respect - with the exception of Norway and Japan. The UK did decline over this period, but to a lesser degree than other European markets, such as Italy, which saw significant decline in this period, making the UK much less of a laggard than before.

So the UK is challenging, but it is still a vital market, and has held up better in recent years compared to other European markets.

One reason for this is simple: these countries are becoming more like the UK in terms of tightening market access. For instance, we are seeing increasingly regionalised market access in Italy, a highly challenging pricing environment in France, and the introduction of AMNOG in Germany – they are playing catch up with the UK's market access agenda.

The UK as a pioneer, not a laggard

The UK, along with the Netherlands and Sweden, is a pioneering country in both the generation of Real World Evidence (RWE) on pharmaceutical used and in the adoption of RWE methods. Case studies from the UK suggest it has the most extensive application, given the number, variety and breadth of resulting decisions relative to the entire health system.

Whilst companies understand the emerging importance of RWE, they do need to build capabilities. Companies must make sure that they don't sideline RWE by making it purely the responsibility of clinical research colleagues or the medical department.

Instead, it should be an integral part of the commercial and market access functions of the company; this will be even more important in a sophisticated RWE environment, as the UK is.

2: The rise of digital healthcare

Another area in which the UK is a pioneer is in using digital technology in healthcare.

The digital world is giving patients greater access to information and data about healthcare, and their own conditions – via online information sources, health-related apps, and even wearable technology which can monitor conditions. This all adds up to a revolution in healthcare: patients will have a far greater role in determining their healthcare choices, and the technology also presents healthcare providers with an opportunity to fundamentally change the patient journey from symptoms through to treatment.

Doctors in the US are going as far as prescribing apps to patients to help them understand and manage their conditions, and the UK's National Health Service is promoting a similar policy.

This will have a major impact in treatment, compliance and disease management in the long term. The UK is following the US as a pioneer in this field, which is why the pharmaceutical industry must actively consider how to maximise patient engagement using digital media.

It is clear that you have to listen to what is being said on social media about your disease, your product and about your company.

Does the UK still matter?

Now that most of the patent cliff has passed in the UK, the list price growth is expected to reach 3.5 per cent CAGR to 2018.

Measures from the newly updated UK pricing system are not built into this forecast. The Pharmaceutical Price Regulation Scheme (PPRS) came into force in January 2014, and involved the UK industry effectively guaranteeing limited price rises, and rebates to the UK health service where spending exceeds a defined level. The agreement means the PPRS covered market will not grow at all in net terms in 2014 and 2015, and will then grow in a very limited way in the following years over its five year agreement period.

While it limits growth, the PPRS does provide a degree of certainty on the market, as well as free pricing, which compares favourably to some other European territories. 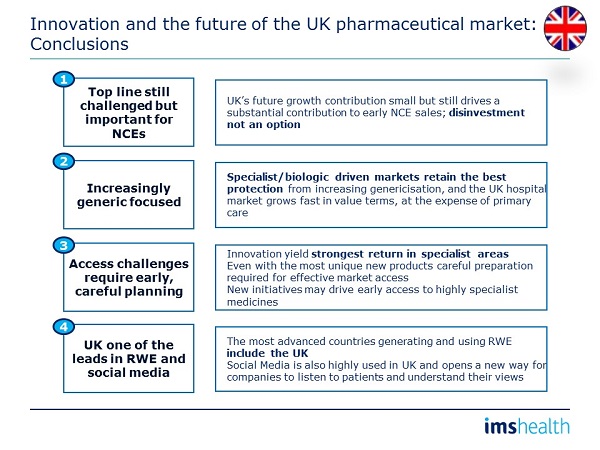 The UK, like the other major developed markets, is still a vital part of a research-led pharma company's global portfolio. This is particularly the case if you are launching specialist high value medicines, and particularly if you are a small-to-medium-sized company.

The UK's contribution to overall global market growth is small, but it still represents a major contribution to early NCE sales. Disinvestment is not an option: there is no emerging market alternative if you are in the innovative part of the market.

Pharmaceutical companies looking to maximise their returns from the UK need to invest in understanding the market access challenges in depth and detail, and embrace the twin areas of real RWE and digital health in order to benefit from that pioneering movement.

This article is based on the recent IMS Health webinar hosted by pharmaphorum: The future of the UK pharma market: a global context. Click on the link to watch the presentation.

The second part of Sarah Rickwood's overview of the UK market will examine which drugs were the most successful UK drug launches of the last few years, and how market access planning played a role in that success.

Sarah has 20 years' experience as a consultant to the pharmaceutical industry, having worked in Accenture's pharmaceutical strategy practice prior to joining IMS Management Consulting.

Have your say: How can pharmaceutical companies optimise their UK market performance?