The changing environment for pharma and medtech companies in Europe

Rebecca Aris provides an overview of the topics discussed at the recent event held by SFL in London, ‘The changing environment for pharma and medtech companies in Europe‘.

It is a difficult time for pharma facing challenges such as declining R&D and a poor industry reputation. Being such a heavily regulated sector, demands on pharma, in addition to medtech, are steadily increasing. This article explores the current regulatory and legal environment that is shaping European pharma.

Having products available that are safe and effective to be treated with is important to us all, as we are all potential patients. In order for that to happen the legislation has to be in place to be able to access products promptly in the knowledge that they are safe for use.

Changes in legislation, whilst ultimately aiming to provide the most beneficial outcome for patients, temporarily presents pharma with a challenge as it learns how to adapt to the new environment.

Below are examples of changing legislation that are currently shaping the industry and that are presenting a challenge to pharma.

“Having products available that are safe and effective to be treated with is important to us all, as we are all potential patients.”

The EU clinical trials law is currently up for revision. The question that everyone is asking is will this revision be for the better, explained Anna Hallersten (Public Affairs Director, SFL).

The current rules have been in force since 2004. The intent of these rules was to protect clinical trial participants and to harmonise the rules in the EU to make it easier to conduct multi-national research. Partly as a result of the rules coming into force, there was a 25% drop in clinical trial applications between 2007 and 2011, suggesting that the rules made it harder to move ahead with clinical trials. In addition, costs to conduct trials have increased for both commercial and academic sponsors. Furthermore, the law as it stands today provides too much room for interpretation.

The legal proposal for new rules was published in July of last year. The key aspects of this were:-

• Only one clinical trial application for all 28 EU countries

• Simplified communication with all authorities via EU portal

• Clear timelines with tacit approval mechanisms (if authorities have not reacted to clinical trial application with a clear response, the scientific part of the application is considered approved, which puts pressure on the authorities to respond in a set timeline)

The proposal, which has been under discussion in European parliament since last year, has caused some reaction from stakeholders.

• Might have created a weaker role for ethics committees

• Too much information on clinical trials made publically available

• Risk of misuse of such information

o Personal data privacy (could an individual be identified, especially a concern for rare diseases?)

Another proposal that will impact the industry is the EU data protection regulation. This will replace the current data protection directive. The directive aims to facilitate data transfer with the EU and protect individual privacy. The proposal applies across industry sectors and is strengthened by the principal that only a minimum of personal data will be collected. The legal proposal will offer individuals the ‘right to be forgotten’ i.e. they have more of a right to have data about themselves erased.

The healthcare industry has offered its perspective on the regulation and has expressed concerns on how this might complicate data processing for clinical research. In addition, it highlighted how health research is already governed by strict terms for data use.

The following document (comments in response to the call for evidence on EU data protection proposals) states, ‘As noted, in compliance with the Clinical Trials Directive and international standards for clinical investigations, patient identities are disguised before clinical trial data are reported by study sites to pharmaceutical companies. Researchers at pharmaceutical companies use key‐coded data to conduct analyses, and to develop, test, and confirm research hypotheses. The keys are held solely at study sites by clinical investigators (healthcare professionals) who are prohibited under obligations of good clinical practice in place since the Nuremberg Code of 1947, as well as obligations of professional confidentiality, from revealing research subject identities except during field audits or where necessary to protect the health of a particular research subject. Researchers at pharmaceutical companies have no reason to identify the data subjects behind the key‐coded data as this is not necessary for their research activities.‘

The medtech industry (companies that are manufacturing and developing medical devices and diagnostics) is also facing tougher rules and almost pharma-like requirements. The industry reaction to such requirements has been one of strong concern, with particular concern around the fact that these requirements are too complex and that the timelines were unrealistic.

Impact of 2014 European Parliament elections on the law proposals?

In May of next year elections will be held for the European parliament. These may affect the aforementioned law proposals. Important votes may take place before the elections if current anticipated timelines are kept to.

Figure 2: Impact of 2014 European Parliament elections on the law proposals*

As a result, educational efforts will be required to educate newcomers, especially if votes take place after the elections.

Niklaus Wagner, (Public Affairs Manager, SFL) opened his presentation by explaining why the Swiss perspective was of importance. 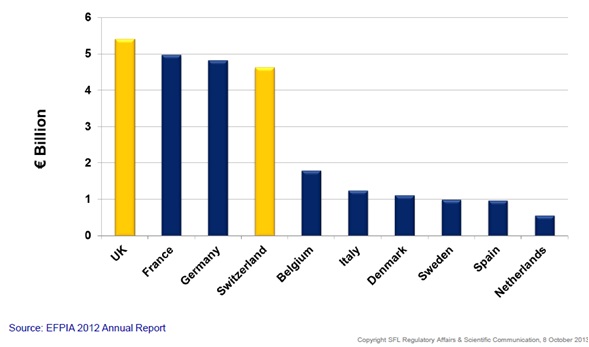 Pharma investment in R&D in Europe shows that Switzerland is an important location for pharmaceutical R&D. In addition, new legal framework in Switzerland, coming into effect at the beginning of next year, will see an impact on clinical trials conducted in this region. The new legislation comes against the background of a 45% decline in the number of clinical trials performed between 2004 and 2011. ‘The new law on research involving humans regulates clinical trials and aims to protect the dignity, personal rights and well-being of the trial subject. In addition, it intends to build favourable conditions for research, contribute to the quality of the research and assure the transparency of research. 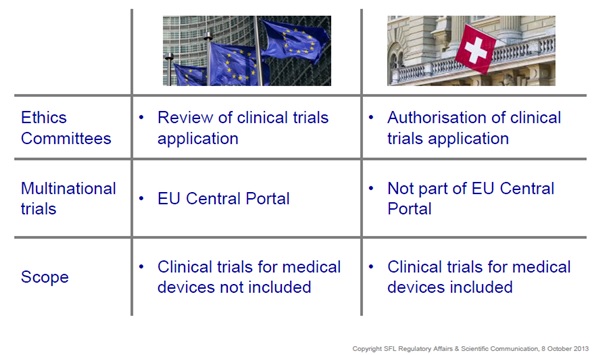 The new legislation defines an approval procedure under which Swissmedic and the Ethics Committees will in parallel, assess and authorise the research project. Clinical trials will need to be registered on a WHO accepted primary or on clinicaltrials.gov in addition to a supplementary Swiss database.

Transparency in interaction with HCPs

An increased call for transparency is another issue shaping the industry, which originated from a focus on corrupt business practices. Whilst not being specific to life sciences, this cross-industry concern has caused many issues to arise.

In 2009, the WHO released a factsheet citing the following:1

• For the healthcare sector, despite being a highly regulated sector, fraud and abuse in developed countries was estimated to cost individual governments as much as US$23 billion per year1

The economic crisis has increased public and media scrutiny of healthcare spend and forced these issues to be addressed. Legislators have sharpened anti-bribery laws and increased enforcement. A lack of trust in the life-science industry, coupled with a general perception that the industry unlawfully influences HCPs’ treatment decisions, has amplified the calls for industry transparency.

Transparency initiatives that have come into place include:-

• Legal- and self-regulatory initiatives to create more insight in institution decisions and business practices, such as the US Sunshine Act, the EFPIA Patient Code and the, EMA (draft policy clinical trials transparency).

• Ethics and transparency gain increased priority for the EU Commission

As a consequence of the new EFPIA Disclosure Code4 released this year, substantial resources are required for complex data collection and validation. Meeting multi-jurisdictional requirements will present a challenge and there will be higher expectations on compliance systems and processes.

But is increased transparency always an improvement in itself? Is there a risk of data overload and therefore missing the context of data? Transparency alone will not eliminate conflict of interest issues. Samantha Regenthal, (Head of legal services, SFL) concluded by pointing out that a ‘responsible approach by all stakeholders is necessary for increased transparency to be meaningful‘.

It’s obvious that regulations are increasing. In a lot of areas directives, that offered some level of interpretation, are evolving into regulations.

In summing up, Shayesteh-Fürst-Ladani (Managing Director, SFL) discussed how policy makers and payers are increasingly in control of prescribing situations resulting in a shift toward different stakeholders. The way we work with regulators in general is evolving into a partnership, but do regulators have the capacity to engage with product developers from such an early stage? And what do these daunting changes hold for the future?

Whilst we can’t be clear what the industry of the future will look like, we can be sure that those companies who successfully emerge through this period of pressure and change will be better equipped to provide safe and effective products in a timely manner whilst satisfying the ethical demands of the regulators.

Rebecca Aris is Managing Editor of pharmaphorum, a very fast growing online thought leadership channel for pharma, representing an audience of senior pharma execs from all over the world.

What will the European pharma environment of the future look like?