Daniel Ghinn explores the processes behind launching LillyPad, global pharmaceutical company Eli Lilly’s corporate blog, which has associated social media channels on YouTube, Facebook and Twitter. Daniel discusses the challenges of getting the regulatory teams at big pharma companies on board, and speaks with Greg Kueterman, from Lilly, about his experiences in this area.

It is almost two years since Lilly took its first deliberate steps into corporate engagement via social media, with the launch of its corporate blog, LillyPad, and associated social media channels on YouTube, Facebook and Twitter.

At the time, the launch of LillyPad in September 2010 placed the company among the industry’s social media pioneers. “There were not a lot of people out in front of us leading the way“, said Greg Kueterman, Lilly’s Director of Corporate Communications, at this week’s Social Media in the Pharmaceutical Industry conference in London.

There were enough other companies already engaging in social media though, to help convince Lilly’s senior leadership that the channel should be developed as an integral part of the company’s Corporate Communications function. Kueterman says that this, along with the fact that US regulators, legislators and media were also already using social media, helped make the case for change in Lilly. And CEO John Lechleiter was also already running an internal company blog so there was some familiarity with the channel at a senior level.

“At the time, the launch of LillyPad in September 2010 placed the company among the industry’s social media pioneers.”

I spoke with Greg Kueterman in London and asked him about his experience over the past two years with LillyPad. He told me about the original vision behind LillyPad and what the channels are used for today, and we talked about the process of gaining leadership buy-in to new channels.

Kueterman also shared the challenges of content planning for media channels that need to be able to respond rapidly to breaking news. “In some ways we act much like a newsroom, on a much smaller scale”, he says. “We need to communicate about the issues that are affecting our industry, so we have to be quick about it, transparent about it, and conversational about it, so that we’re not only checking a box and communicating information, but doing it in a meaningful way.”

Content for LillyPad and its associated channels is planned using an editorial calendar, but day to day posts are influenced by other news too. “I’ve learned that there’s no way to predict the next day,” says Kueterman. Sometimes, he says, “…you wake up and something will have happened in the news that directly impacts our business and we need to react on our various platforms, whether it be a blog, or Twitter, or both.”

You can watch the full informal interview below:

Two years after its launch, LillyPad’s content is categorised into one of four topics: public policy, advocacy, corporate responsibility or ‘life at Lilly’. These content areas deliberately steer away from three major no-go topics defined by the company: products, patients, and disease states. Content direction was just one area included in a Standard Operating Procedure (SOP), which was developed to provide a framework for approved engagement in Lilly’s social media platforms. 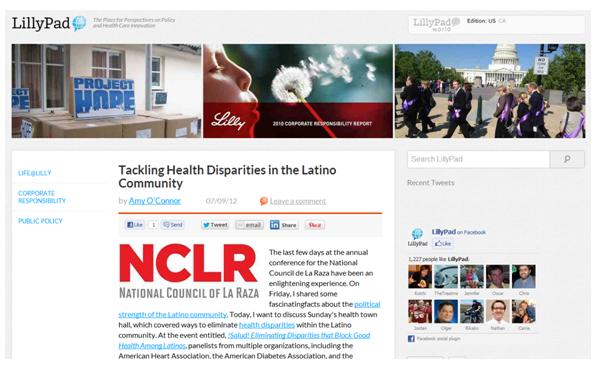 Figure 1: LillyPad’s content is categorised into one of four topics: public policy, advocacy, corporate responsibility or ‘life at Lilly’.

Kueterman says that it took a lot of hard work to develop and approve the SOP with legal and regulatory compliance colleagues, but once it was approved this allowed ongoing engagement and posting without the need to approve every post. The time required for approval of individual posts, he says, would make it impractical for the kind of rapid response associated with social media.

Lilly’s social media strategy plays a role in engaging traditional media too – in some cases traditional press titles have contacted Lilly after reading content on the blog first. And the blog provides a platform for Lilly to respond to emerging stories in a controlled manner. Kueterman says that on one occasion, rapidly publishing a blog post in response to negative content that had appeared elsewhere moved the conversation to Lilly’s own platform, bringing balance and avoiding what could have been a more serious issue.

So two years in, what does the future hold for LillyPad? Kueterman says that other countries are launching their own versions outside of the US. Lilly in Canada has already launched its versions of Lilly’s social media platforms including LillyPad CA, while others in Mexico and Europe are planned. And Kueterman hopes to develop a greater level of rich content such as video, too.

Daniel Ghinn is CEO and Founder of Creation Healthcare, the digital planning consultancy for pharma and healthcare with local expertise in over 20 countries. Daniel may be contacted at daniel.ghinn@creationhealthcare.com.

What does the future hold for pharma companies and social media?