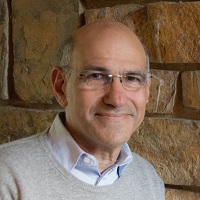 Let’s start by saying that I am an American, but not from Texas. I am not a ‘cowboy’ and I don’t carry a gun. And I am not an aggressive person. I am just a medical journalist who became a cancer patient – twice.

I was diagnosed with chronic lymphocytic leukaemia (CLL) in 1996 and then myelofibrosis in 2011. Other CLL patients online helped direct me to a renowned sub-specialist and I believe his single-centre phase II trial saved my life. In 2011 I entered a trial for a new medicine to prevent deep vein thrombosis (DVT), after I had been hospitalised for a DVT, and they discovered the myelofibrosis.

So, this history has propelled me to want to help patients in the US and Europe so they become smarter about their illnesses, all the options, and get the best care. I work with a team across the US and Europe to try to accomplish this by producing editorially independent content, and we are having an increasing impact.

Multiple surveys show that 30 per cent of the people we reach discuss what they learn with their doctor and 6 per cent of the time their treatment plan changes based on what they discuss. And certainly we boost awareness of what clinical trials are, and why patients should seek them out and consider participating.

However, to be frank, our efforts are often stymied by red tape, old thinking, plus fights over money, and egos. As a former television reporter and producer, I dream of using the most modern communications techniques – like interactive in-person and online events and truly useful mobile apps – to help patients do better wherever they are and to connect them with others like them. And to do it with meaningful scale. Our focus is especially on cancer where new knowledge and new approved and investigational medicines can make a real difference, and it’s critical people are in-the-know as cancer becomes more common. But I have been finding this is especially difficult to advance in Europe.

I have been living in Barcelona for almost three years. At first I just asked questions and met people. I also recorded many video interviews with European experts at my own cost and posted them online for patients on patientpower.eu, oncologytube.com, and other sites. Then I started seeking ways to get funding to do much more. Therein lies the problem.

First: There are large and small patient groups in some countries in Europe. Others have none. When it comes to cancer, and sometimes rare cancers, in some places there is no-one focused on helping patients with support, or the patient just doesn’t know where to turn or even that they should seek support. Some of the patient organisations are terrific, with many services, but often using modern communications is not their strong suit. I don’t fault them, as they have so much on their plate.

Not surprisingly, pharma connects with them for advocacy, help with lobbying of government panels, and learning about a disease and patient needs. That’s fine. But what is often forgotten is that many patients, maybe even most, have no connection with these groups. They have a doctor but that’s where it ends. And family and children also seek information and express their points of view. So, for companies that want to be truly ‘patient centric’, having relationships with formal patient groups is only a starting point.

Second: Obstacles within pharma itself. Many others have written about silos in pharma and how departments don’t work together. As a patient I don’t understand why a pharma CEO can’t demand that departments collaborate for the benefit of the patient or else someone gets fired. Maybe the CEO is an old line thinker himself/herself and only doctors matter? Maybe it’s just a business, and what patients say, feel and want to know is simply an incidental concern?

From my point of view, I sometimes encounter middle managers in Europe who don’t talk to one another. They seem to guard their territories and feel bound by many restrictions. To me, while recognising there are laws, it seems like scar tissue from years of old processes. Can’t someone cut this away? It’s not about what can’t be done; it should be about finding solutions to do the right thing in a big way and with impact. My hope is decisions about supporting education and empowerment of patients – in a digital age where borders matter less – can be made at the European level rather than country by country, where departments often do not collaborate. Who is the big thinker who can say “Yes”?

Third: I have been told that European patients are not digital and that they will not seek health information online. Or that over-60s are not online or don’t have smart phones. Or, even if it works in the UK it won’t happen in Italy. To that I say “rubbish”. Yes, it’s true I am from Seattle, where you can rub elbows with tech evangelists at any Starbucks, but I see clearly that digital communications is the connection patients worldwide will increasingly find to help them with critical medical knowledge and emotional support.

“It’s about money and short-term goals, even though pharma clients have products that will support a therapeutic area for many years”

Fourth: Obstacles from established advertising, public relations, and patient advocacy agencies. It’s about money, right? Agencies fight to win or retain clients and accounts. While now they may recognise their clients want to talk to patients, most agencies have no history of doing that, have no credibility with patients, and no easy access to patient communities. Also, what they produce – often gorgeous looking websites or slick videos with actors playing patients – are not useful to patients because, under regulations, content is limited and rarely changes. On the PR side, campaigns are usually too commercial. I have attempted to work with some agencies to appeal to them about publicising independent patient projects we have helped create. I get smiles and handshakes but nothing ever happens. These are nice people, but this is out of the scope of the way they get paid. Again, it’s about money and short-term goals, even though pharma clients have products that will support a therapeutic area for many years. I do appreciate that a small number of agencies ‘get it’ and my hope is more will!

The Bottom Line: Independent groups like, but not only, Patient Power have contact and reach to thousands of cancer patients day in, day out. True, it has been more in the US than Europe. But my forays with European patients tell me there is no difference. So I am convinced a wave of patient-to-patient and expert-patient online communications will wash over the continent and have growing power. This will affect which clinical trials are enrolled in, how fast, and what medicines are approved and used.

Being patient centric takes innovative actions throughout a company, monitored by top leadership, and a fresh look at the allocation of funds long-term. As we are now mid-way in the second decade of the 21st century, isn’t it about time this happens?

Andrew Schorr is the founder and president of Patient Power, a patient organisation that produces educational content on video for cancer patients and family members in the US and Europe. Andrew is a two-time cancer patient himself and, since 1984, has been a pioneer in communications programmes for patients. Patient Power’s editorial independent content, available through patientpower.info and patientpower.eu and many other partner and social media sites, reaches over 50,000 patients a month. The content also has been viewed more than 1.3 million times by oncology professionals on oncologytube.com.

Have your say: How can pharma become truly patient centric?

Read more on the issues around patient centricity:

Surviving cancer, but not the system

Regulation optimisation could save thousands of life years