Wendy White shares details of an upcoming hackathon that will help to develop a screening tool that can alert primary physicians to the possibility of a genetic disorder and suggest a possible diagnosis.

Can disruptive technologies solve the challenge of diagnosing rare diseases? There have been several attempts to compile databases and design rare disease search engines that help physicians with cases that are difficult to diagnose. But what about a screening tool—something that would alert primary care physicians to the possibility of a genetic disorder and suggest possible diagnoses? Is there a technology developed for other purposes that could serve this one?

The geneticist Sharon Moalem, MD, PhD, believes this is possible. Seven years ago, he began work on a free facial recognition tool for genetic and congenital disorders that leverages technology developed for the security industry. “What got me started was watching what families go through over the years, trying to get a medical diagnosis,” Moalem says. “I realized that sometimes there were visible clues and yet many physicians, through no fault of their own, lack the ability to diagnose in this way. Wouldn’t it be great to automate this process using facial recognition technology?” 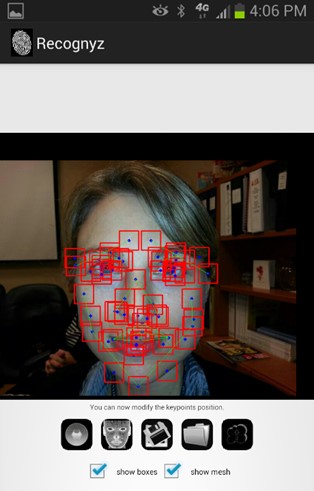 Moalem decided to take on this challenge himself and founded Recognyz Systems Technologies. “Through trial and error, we came up with a system that works well, but it uses a camera that does 3D analysis and costs $30,000. That pushed me to develop something we could use via cell phone or mobile device.”

“The current system uses high resolution cell phone photos to identify possible genetic disorders. Right now the tool does relative comparisons. It will tell you, ‘This child’s eyes are wide, resembling the following three syndromes.’ The best tool possible would use the camera phone and give you actual measurements.”

It’s been a long journey, for Moalem. But if all goes well, Moalem’s vision will become a reality at the upcoming Healthcare’s Grand HackFest with H@cking Medicine in March. Hackathons, bring together teams of engineers, entrepreneurs, designers, patients, and healthcare professionals to develop creative solutions and innovative breakthroughs in various tracks over the course of one weekend.

“But what about a screening tool—something that would alert primary care physicians to the possibility of a genetic disorder and suggest possible diagnoses?”

This team-based approach to solving problems and accelerating solutions is a perfect fit for the rare disease community. Listening to all points of view and using the skills and experience of all stakeholders is the secret to the remarkable progress that has been made in orphan drugs and rare diseases over the last 30 years. So it’s not surprising to see the rare community adopting hackathons as a way to ramp up improvements in diagnosis.

Last year Ed Fennell, a caregiver of two grandchildren living with rare diseases, took on the challenge of hacking diagnosis from a slightly different direction. Fennell organized a series of hackathons at Rensselaer Polytechnic Institute to implement Naming Zebras, a patient-centered system for self-identification of rare diseases. Work on the prototype for this web-based platform is continuing, with the Fifth Hackathon for Rare Diseases taking place on Saturday, February 22, 2014. Fennell was motivated to organize the hackathon by his frustration with the fact that it took doctors nearly 3 years to arrive at a correct diagnosis for his granddaughter, Haley, who has CDLK5 atypical rett syndrome. “We have a diagnostician shortage,” Fennell says. “No one wants to self-diagnose, but if there’s no one to pump your gas, what do you do? You get out of the car and pump your gas.”

Diagnosis of rare diseases is critically important. The majority of rare disease patients are children. If they’re not diagnosed early, these children may suffer irreparable damage and developmental delays. Every month that goes by puts them more at risk.

Also, every new patient who is diagnosed has the potential to help others who may be waiting for a diagnosis or suffering because they have been misdiagnosed. Most rare diseases are genetic—around 80%—so each patient you find will likely lead you to more.

Unfortunately diagnosis of rare conditions is challenging. In the US, it takes an average of 7 years to get the correct diagnosis, with 2-3 misdiagnoses along the way. One reason rare diseases go undiagnosed is that physicians are unlikely to have enough exposure to them to recognize the signs and symptoms. In a recent study in the Journal of Rare Disorders, 56.4% of primary care physicians who had a rare disease patient in their practice rated their level of knowledge of the disease as fair or poor at the time of diagnosis.

“If they’re not diagnosed early, these children may suffer irreparable damage and developmental delays. Every month that goes by puts them more at risk.”

Tools to speed diagnosis have great potential to add to our understanding of rare diseases and improve diagnosis and hackathons have great potential to make these tools available to us in the shortest possible time. For Moalem, the hackathon offers the power of new perspectives. “Sometimes people who come at the problem from a different direction will see it with new eyes, and the potential to expedite the advancement of this cutting edge diagnostic technology is truly exciting,” he says.

Disruptive technologies may be the best way to address the rare disease diagnosis challenge, according to Moalem. “It’s not realistic to train thousands of physicians to look for something they don’t see in their practices. It’s just not feasible and it’s not the best use of resources..”

Wendy founded Siren Interactive in 1999. For more than 14 years across more than 30 disease states Siren has had 1 focus, finding rare disease patients and connecting them to appropriate therapies. A recipient of the 2011 Manny Heart Award, and featured on the Inc. 5000 list of fastest growing privately held companies for the past four years, Siren Interactive has been a trailblazer in recognizing the shift in patient driven decision making and innovating to meet patients and caregivers where they live. She served as a board member for the National Organization for Rare Disorders (NORD) for four years, is a current board member and the President-Elect for the Healthcare Businesswomen’s Association (HBA), a board member of Global Genes, part of the Chicago Life Sciences Consortium executive advisory group and a trustee for the Boys & Girls Club of the Union League of Chicago.

Wendy approaches the business from her unique perspective of being an entrepreneur and digital marketing expert, as well as being the mother of a daughter with a rare disorder that was diagnosed as a direct result of Wendy becoming an empowered caregiver. Wendy’s personal journey with her daughter, which began in 2001, was the impetus for Siren Interactive to focus solely on marketing rare disorder therapies. In 2011, Wendy led the collaboration with 12 fellow rare disease caregivers to co-author Uncommon Challenges; Shared Journeys: Stories of Love, Hope and Community by Rare Disease Caregivers. In 2012 she was recognized as one of the 100 most inspiring people in pharma.

Closing thought: What other rare disease challenges can hackathons address?