Within every sector there is an industry average performance but some companies consistently enjoy above average performance. The reasons for this divergence are attributable to the differences brought about by each company’s unique blends of capability, competences and approach.

Looking at the Pharma sector, Dr Paul Stuart-Kregor explains how companies can optimise this mix to best ensure that they are good at what matters most when developing and commercialising assets.

We all know the definition of ‘Insanity’ courtesy of Albert Einstein: “doing the same thing over and over again and expecting different results“. And yet we see many pharmaceutical companies following ostensibly the same approach to developing their assets.

But surely if it works why change? But drug development is NOT working effectively.

A brief look at the statistics for new chemical entities coming to market provides a timely reminder that the Pharma market is an evolving and dynamic context in which to do business. According to a 2012 article in Nature Reviews Drug Discovery, the number of drugs invented per billion dollars of R&D invested has been cut in half every nine years for half a century1.

“But drug development is NOT working effectively.”

There are companies responding positively to this changing environment and adapting their strategy accordingly. Janssen, Bayer, Merck, Pfizer to name a few, and institutions such as Stanford, are trying ‘innovation incubators’ which seem to speed up the development process by fostering bold thinking and cross-fertilisation of ideas across academia and commerce. However, while asset discovery is clearly part of it, it is our view that many companies take a myopic view to the subsequent development of those assets resulting in sub-optimal choices at key stages in the process resulting in non-competitive molecules making it to market.

For example, it is common for companies to decide in early stage (Phase 0 or I) on a Target Product Profile (TPP) that results in a narrow future opportunity. We believe what is needed is a more creative approach to crafting a range of prototype TPPs and outline Phase II options, an approach which involves some genuine ‘product design’ thinking. Example elements could include: mechanisms of action (MoA) interrogation, full receptor profiling, ‘Future’ market insights, broad directive positioning options plus Target Optimal Profile (TOP) prototypes to pressure test and outline options for paths to market. The net result could be parallel Phase II Proof of Concept (POC) options resulting in a variety of routes to market, which can often lead to the potential to expand into a wider range of therapy areas, consequently increasing the chance of success in one or multiple areas.

“…by Phase II, key stakeholders are often wedded to a particular approach already adopted by the therapy team”

The challenge however is that by Phase II, key stakeholders are often wedded to a particular approach already adopted by the therapy team, with similar minded ‘indication experts’ also co-opted on to the team. As a result, all the development effort is expended to support that singular position, and not to pressure test it or look for better alternatives.

Worst still, we see poor thinking behind the development program. A risk-averse technical strategy leads to ‘off the shelf’ clinical designs resulting in a ‘signal’ that is not commercially differentiating. There can then be real pressure from technical functions to push the true risk into Phase III. So a true POC is not adequately explored in Phases Ib and II but only in a mini Phase III program run, and even then without adequate input from commercial. The net result can be a poorly differentiated molecule, competing without the necessary evidence package to truly drive success. What then compounds the problem is that any forecasting has been done on the TPP and not the sustainable differentiating position in the market, resulting in expectations being set too high and the product perceived as a failure.

In a commercial world where the only consistent thing is change, Pharma companies need to be continually assessing the success of their asset development strategies. Not just in the light of the existing commercial context, but using this to look forward into the future to best predict what changes will be required in order to remain successful. 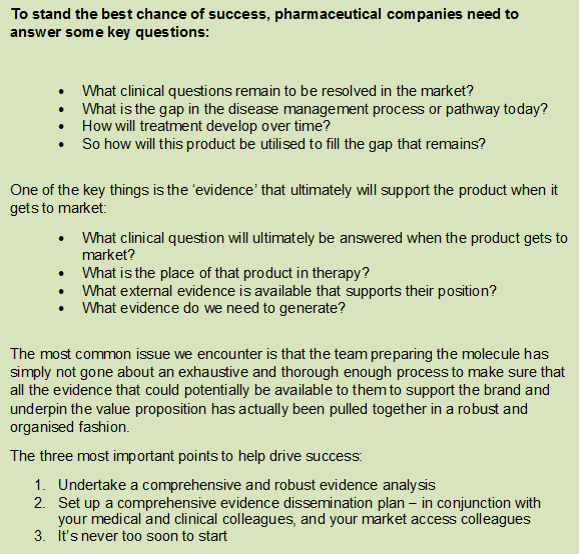 Dr Paul Stuart-Kregor is a Director at Cello Health Consulting. He can be contacted at pstuartkregor@cellohealth.com or visit the website www.cellohealthconsulting.com

Closing thought: What clinical questions remain to be resolved in the market?