Clinical trials in social media – after the trial, patients go home and log on…

Gideon Mantel of Treato highlights the importance of listening to social media when it comes to patient conversation surrounding clinical trials.

When scanning online health discussions, it’s possible to very roughly divide them into two types of health-related posts: the people who go online seeking support and advice, and the people who are looking for hard-core health data to help them deal with medical conditions. I would classify online discussions of clinical trials as mainly in the latter group.

Of course, for common chronic conditions like diabetes, there are millions of people that participate in online discussions, and the data for patient posts is rich and varied. One might expect the opposite to be true when looking at information about clinical trials in online forums. It’s a fact that clinical trials typically have anywhere from a few dozen to hundreds (or even thousands) of participants, not exactly the large numbers that bring to mind fertile ground for online discussion.

For the past twelve months, we have been exploring the online social media data regarding clinical trials using big data analytics to see the big picture of patients’ discussions online. As a result of this research, we have determined that it is possible to identify clear social media “footprints” for every stage 3 clinical trial, and the majority of clinical trials have a social media presence much earlier than stage 3. Quantities of posts about particular trials that we investigated ranged from as few as 100 posts on a particular trial to as many as 1200 posts.

So who is talking about these clinical trials online, and what do they discuss? These discussions arise from patients who are waiting for the trial to be completed, those expressing hope that it will be successful, from family members who wonder out loud what the cost of the drug will be, and even from the financial community, musing about the value this new drug will create for the pharmaceutical company.

Discussions about clinical trials take place throughout the entire process of the trial, often at fairly low volume, but frequently of very high quality, such as from people who are themselves participating in the trial.

Here are some things we have observed:

• 4% indicated that they are waiting for the results

• 2% indicated that they are about to start the trial

Digging a little deeper, let’s look at a recent social media example from one ongoing clinical trial. One patient post from May 2012 requested information about the trial:

“So my neuro wants [to start] me on [trial name] when it comes out. I just don’t know much about it and I’m having problems finding the actual clinical studies. Is anyone who’s currently on the drug willing to share their experience? Also, if anyone has a link to the published clinical trial results for the DEFINE and CONFIRM studies on this drug I would be eternally grateful.”

Over the course of the last three months, this inquiry received informed responses from eight other people regarding this trial, with some providing multiple responses. Some provided links to the most recently published information about the trial, others gave their own personal testimony about participating in the trial for the past three years, and yet another provided information that the drug being trialed is actually a new implementation of an existing drug, and it has been used “off-label” for several years, providing much anecdotal evidence.

In a separate patient thread about the trial, one patient quoted extensively from a recent press release about the phase 3 trial, and then made the conjecture that the drug “could easily cost $3500–$4000 per month, if not more,” which touched off a heated discussion of the high cost of medications.

“Clinical trial managers have a healthy concern about their participants’ use of social media.”

Clinical trial managers have a healthy concern about their participants’ use of social media. Rightly so, since a single patient post could influence countless others, potentially jeopardizing a costly and lengthy trial. Let’s say a trial participant shares on a forum that he’s sneezing and coughing as a result of the drug trial he’s participating in, but in reality he just slept with the window open and caught a cold. Other participants in the study may read his comments in social media and may start imagining their own coughing symptoms based on what they’ve read.

On the other hand, just as the broadcasters of the summer Olympics were not able to keep people from tweeting the news in real time about their favorite medalists, clinical trial managers will not be able to prevent participants from sharing their thoughts, feelings and experiences online. Not only can they not prevent it, but they should be monitoring it, for exactly this reason. It will provide them with insights that they may not have learned otherwise.

In addition to the new knowledge they gain, clinical trial managers benefit from the speed at which the insights can reach them. Social media analysis typically can happen in real time, whether by simply setting up a Google alert, or using more sophisticated tools that add a layer of analysis on top of the raw posts. Rather than wait for the traditional results and milestones, adding social media into the clinical mix inserts a potential agility that was impossible in an earlier age. 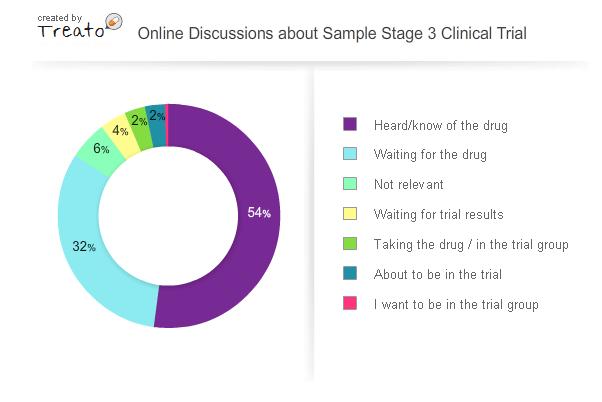 Pharma marketers also benefit by tracking drug trials in the social realm, since once FDA approval is in hand, they are already ahead of the game with anecdotes, testimonials and market directions, drawn from the revelations of the very patients that tested the drugs early on.

Social networks are impacting every segment of our lives, and are affecting healthcare as well. Clinical trials are only a small but vital part of the process, and pharma companies and their clinical trial partners should pay close attention to the online dialog, as it may become a critical piece of the clinical trial puzzle.

Gideon Mantel is the CEO and co-founder of Treato, a new platform of patient intelligence based on online discussions about real life experiences. Since its start in 2011, over a billion patient discussions from forums and blogs have been analyzed using Treato’s proprietary Natural Language Processing algorithms, generating the collective patient voice. Treato.com has been validated by millions of users, providing an indispensible patient-oriented knowledge source which is completely advertising-free and free-of-charge. Treato Pharma, launching in Q4 2012, is an innovative pharma-centric brand intelligence service based on the Treato platform.

What can we gain from listening to online conversations surrounding clinical trials?