With the proliferation of studies in the fast growing fields of personalized and regenerative medicine, it is essential that researchers maintain cell line authentication standards for their stem cell cultures to help keep biopharmaceutical research on a solid foundation. Erin Hall discusses.

The average cost of introducing a new biopharmaceutical drug into medical practice is estimated to be $1.2-$3.9 billion, including the cost of failed drugs1. In 2011, Bayer conducted a study that led to the cessation of two-thirds of its drug target validation projects because their in-house experimental data failed to reproduce the published academic literature claims in 65% of projects examined2. Refuting published research findings in subsequent publications is common and part of the scientific process, but experimental irreproducibility is becoming more prevalent3. This brief article aims to put focus on a quality control practice that may help bolster reproducibility in the biopharmaceutical community and create a strong foundation upon which to build solid research.

In a June 2013 article, researchers at Pfizer reported on the use of cell-autonomous disease phenotypes modeled in vitro as a way to transform the drug discovery process4. This perspective paper on the use of in vitro differentiated human pluripotent stem cells (hPSCs) highlights the need for researchers to utilize methods that encourage reproducibility in these specialized research experiments. The hPSCs are derived from donors with specific phenotypes, such as spinal muscular atrophy, hereditary cardiac disorders, diabetes and even autism, blindness or Alzheimer’s disease4, 5.

“The average cost of introducing a new biopharmaceutical drug into medical practice is estimated to be $1.2-$3.9 billion…”

The FDA has multiple documents specific for the use of human cell-based products, but do not include requirements for proof that a given lot of “in-use” or working cells actually originated from a specified donor and was not unintentionally misidentified or mixed with another lot of cells from a different donor6. Quality control measures such as karyotyping, isoenzyme analysis, immunotyping and HLA typing are commonly utilized in the research lab, but these types of tests do not have the power to discriminate between individual human donors6. An additional quality control step to link biologic samples to individual donors should be incorporated into the lab’s QC program, especially for this type of “personalized medicine” research, because the physiological relevancy, safety and drug efficacy is based on the donor patient’s genetic makeup.

With the proliferation of studies in the fast-growing field of regenerative medicine, Buja and Vela at the Texas Heart Institute at St. Luke’s Episcopal Hospital in Houston, TX, published a commentary regarding the immunologic and inflammatory reactions that can occur from exogenous (non-self) stem cell transplantation7. Buja and Vela note that the immunoprivileged status of embryonic stem cells (ESCs) and mesenchymal stem cells (MSCs) are now being questioned7. Misidentification of a patient-specific (autologous) stem cell culture could cause a possible rejection response when used for the purpose of stem cell therapy. These misidentified “foreign” donor cells may express human leukocyte antigens (HLA) that could potentially activate inflammatory and immunologic responses, leading to unclear outcomes for that patient7. 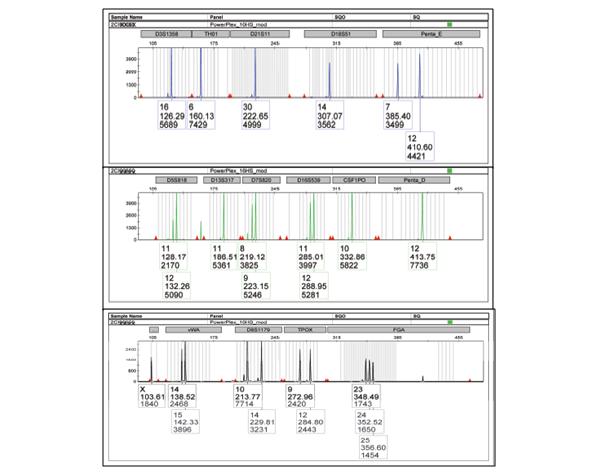 Short tandem repeat (STR) DNA profiling is the method of choice used by various forensic agencies for the purpose of human identification because no two humans (except identical twins) have the same STR DNA profile8. In 2012, standards approved by the American National Standards Institute (ANSI) were released by the ATCC Standards Development Organization (SDO) Workgroup that identifies STR profiling as the recommended consensus method for cell line authentication testing9. See Figure 1 for a sample of the STR DNA profile of a breast cancer cell line (electropherogram) using a commercially available multiplex amplification kit.

Failure to monitor cell lines for cross-contamination or misidentification, a problem that has persisted for cancer cell lines for nearly 50 years, may result in compromised data and ultimately irreproducible results10. Cross-contamination and misidentification is estimated to affect 18% to 36% of all human cell line cultures in use and the data in up to of 40% of peer-reviewed publications11, 12. Unfortunately, this problem is not isolated to cancer cell lines, as it was demonstrated in a well-known retraction involving stem cell research. In 2005, a group of stem cell researchers published the “first report of spontaneous transformation of human adult stem cells, supporting the hypothesis of cancer stem cell origin”13. In 2010, five of the seven original authors agreed to a retraction, which provides14:

“…The authors have been unable to reproduce some of the reported spontaneous transformation events and suspect the phenomenon is due to a cross-contamination artifact.”

The cross-contamination was later suspected to be undetected HT-1080 cells, an immortalized fibrosarcoma cell line that was found growing within the researcher’s adult stem cell cultures15.

Human cell line authentication, comparing the STR DNA identity profile of a known reference profile (i.e a blood or tissue sample from the donor) to the STR DNA identity profile of the established cancer cell line(s) or stem cell line(s), and any derivatives, is a cost-efficient, rapid and straightforward method of reinforcing the validity of the downstream experimental and / or clinical therapy processes. In addition, the resulting STR profile can be easily compared from lab to lab and database to database, as long as good quality assurance measures are in place in the lab performing the STR profiling. If cancer cell lines and hPSCs are used for enhancing drug discovery, regenerative medicine and translational research, it is essential that researchers in both the academic and pharmaceutical industries maintain authentication standards at each step in the research pipeline to help keep these scientific fields on a solid foundation.

Erin M. Hall is the Director of Cell Line Authentication Services at Genetica DNA Laboratories, a member of the LabCorp Specialty Testing Group (Burlington, NC). Erin received a master’s degree (MS) in forensic science from Pace University in New York City and a bachelor’s degree (BS) in molecular biology from the College of Mount Saint Joseph in Cincinnati, Ohio. Prior to joining Genetica, Erin worked as a laboratory manager and researcher in the Pharmacology department at Cornell University’s Weill Cornell Medical College located in New York City. You can contact her directly at Erin.Hall@LabCorp.com.

How can cell line authentication aid the development of personalised medicine?