Parenting as a DMD patient

Parenting as a DMD patient

The sleepless nights and steep learning curve that will be familiar to any new parent take those challenges to new levels when that parent also has a progressive muscle degeneration and weakness disease.

But, even though it’s not been smooth sailing to reach this point, Mitch Coles isn’t letting his Duchenne muscular dystrophy (DMD) prevent him from living his life as he embraces parental responsibilities.

Having written a well-received blog for Muscular Dystrophy UK on being a dad with DMD after his daughter was born, Mitch and his partner recently celebrated the arrival of a baby son who is set to bring them both a new round of exciting changes to their lives.

“I was diagnosed quite young,” Mitch explains, “so it was always there, and I just found out as I went along. Luckily, I had quite an upfront family and my Mum told me relatively young.”

As one of the middle siblings in a family of four children, Mitch’s diagnosis prompted his whole family to be tested for DMD – the results of which showed that no-one else in the family is affected. “It was just one of those things, I guess,” he says, but adds that he wasn’t always so accepting.”

“When I was a lot younger I was really anti-establishment, in the sense that I wouldn’t really cooperate very much with doctors, but I got the gist of what they would tell me – which was that I had a mutated gene, basically. The way the doctors put it was like a lightning strike almost.”

Although he attended all the appointments that his healthcare professionals scheduled, he acknowledges that at that time he probably wasn’t the ideal patient. “I was quite mean to a lot of the doctors. I think I showed my family up quite a bit, but I grew out of that eventually.”

“When I was a lot younger, I’d get upset and scream and shout and throw things but, looking back, I know that all that anger was probably due to the fact that I was coming off my feet and things were becoming hard for me. When you’re a kid, you don’t really know what your feelings are all about – often you just lash out.”

The best days of your life?

By the time Mitch was 11 and starting secondary school he was already in a wheelchair full-time – his DMD diagnosis having been exacerbated by an accident when he was six years old in which he broke his leg. Consequently, he’d stopped walking when he was eight years old and by the time he entered secondary school was well used to the ‘wheelchair phase’. However, his move to a larger school brought out the worst in some of his fellow pupils, making secondary school – already an often-difficult time for children – harder than it should have been.

“Secondary school brings out all the bullies. So, although I had quite a lot of upper body movement, I started to struggle with the bullying I faced. Secondary school can be a terrible place for any kid, but I had a target on me, so people liked using me for the butt of a lot of their jokes,” Mitch says.

His reaction was first to withdraw into himself, and then as it continued he and his parents discussed the possibility of moving school because he was so unhappy. Thankfully, he got in touch with a counsellor who helped him to see things more clearly and to try and understand why other children might not be nice to him.

“Out of that I did start to feel better about it and afterwards I’d give people as good as they gave me, and they left me alone. From when I was in Year 9, I was over it.” 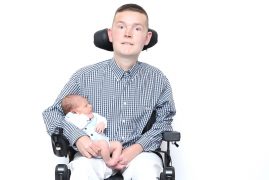 Mitch with his newborn son

Now a ‘DMD parent’, Mitch is keenly aware of how some things have changed for the better since he was a child, but also where improvements are still needed.

“We have come a long way in the ten years since I’ve left school and, although I can’t imagine there aren’t still nasty kids around for someone like me, I couldn’t imagine they’d get off scot free these days.”

He also sees some improvements with the way society as a whole approaches DMD parents and patients, even if more changes are still needed. “Everything is a lot more thought about these days,” he says. “It’s definitely not as bad as it was – I used to feel a little patronised by every healthcare professional that I met, but that has happened a lot less in the last few years.”

Alongside those changes, Mitch and his partner faced an exciting change of their own when she fell pregnant and then gave birth to a baby girl. In addition to the sleepless nights and uncertainty that all first-time parents face, Mitch also had to develop his own parenting style while not being able to walk or use the muscles in his arms properly.

Now two and a half years old, Mitch’s daughter has just become a big sister to his infant son. In terms of preparing for his family’s new arrival as a DMD parent, Mitch says: “We’ve already shown as a family that there’s not a lot we can’t get through together, but I’m sure it is going to be harder now. I’m looking forward to it to a point, even though I’m concerned about how you look after both children – when one screams, what do you do with the other one?”

Finding an audience and following your dreams

It’s these kinds of challenges that Mitch candidly addressed in a blog (‘I’m a dad with DMD’) that he wrote for Muscular Dystrophy UK, whose national Trailblazers networks he’s part of.

In it he described the effects of his physical limitations and what, as a parent, that meant he couldn’t do, such as regularly give his daughter a bottle or feed her with a spoon as she moved from milk towards solid food.

The article was well received, prompting Facebook messages from family members and other people with Duchenne muscular dystrophy. “They were happy to hear that, like me, they’d been told ‘you can’t do this’, commenting that they’d never actually met anyone in person with DMD who’d had a child.”

When it came to writing the blog, as with the work Mitch did when he was at university, technology played an important role. “I’ve been using an onscreen keyboard for a few years now. It can be irritating to use, and I’ve got to be in the right frame of mind for it.

The keyboard is augmented with the Dragon Dictate software he has used for a while, even though that too can be frustrating. “When I was at university I did use it a lot because obviously there was a lot of writing to do, but I would then end up arguing with the computer, so I’m sort of wary of it now I suppose.”

A lot of young men in his position are just simply dissuaded from doing many things that their able-bodied peers take for granted, but not Mitch. “I always said I’d just do it anyway. A lot of people think you can’t do it, but I would hope people can just get that out of their head, forget what they’ve been told and go and do all the things they want to do really.” 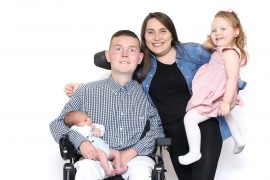