Sarah Rickwood looks back at how pharma changed over the last decade and what this might mean for the industry in 2020.

Years with a nought at the end prompt reflection not only on what the next year will bring, but the next decade. For the pharmaceutical industry, ten years can simultaneously see very slow and very rapid change.

Let’s start with slow: prescription medicines generally take over a decade from patent filing to launch. IQVIA’s recent study[1] quoted 13.8 years as the median time that New Active Substances launched in 2018 took to reach the market from patent filing, a figure that has been slowly rising since the 1990s.

The New Active Substances launched in the early 2020s will likely have their origins in basic research of the 2010s. On some metrics the shape of the pharmaceutical industry has changed little in a decade: the US was 41% of the global market in 2010, by the end of the decade it remained number 1 with 46% of the market. 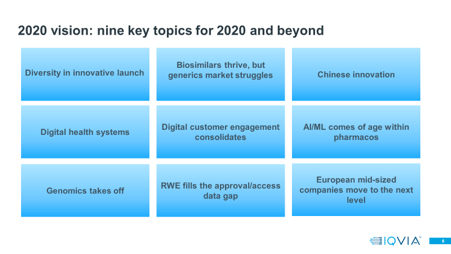 We first moved in silico in 2010, with the FDA approval of the first prescription digital therapeutic, BlueStar for type II diabetes. We moved to FDA approved cell-based therapies in 2011 with Provenge, and gene-based therapies in 2012 with Glybera[2]. However, there was no uniformly forward progress. Early launches failed, commercially, and Glybera was withdrawn.

However, 2019 proved to be the tipping point for non-conventional pharmacotherapies: four key cell and gene therapies, in 2019 Yescarta, Kymriah, Spinraza and Zolgensma, collectively made over $2bn of sales up to the end of the third quarter.

The 2010s started with biosimilars well established in Europe, but non-existent in the US. The starting gun fired on the US market in 2010, with the Patient Protection and Affordable Care act.

It was not until 2015 that the first US biosimilar, Zarxio, was approved. Again, it’s 2019 that is proving the real tipping point: a biosimilar peg-filgrastim, Udenyca,  launched January 2019, has according to IQVIA audits generated $271m of list price sales to September 2019 in the US.

Interestingly, this makes it the largest selling branded medicine of 2019 in the US so far, ahead of all innovative protected medicines, including those also launched in January. So biosimilars will thrive in the 2020s, but much of the off-patent market will see increasing challenge. Yes, there will be small molecule generics bonanzas as the major diabetes classes and the new oral anti-coagulants move off patent, but overall the pressure to squeeze prices on small molecule generics will generate continual crises of supply, as companies deem a growing number of market segments uneconomic.

Payers will have to make choices to improve the sustainability of the generic market – whether this is about managing the market so that profitable, sustainable competition is possible, or, more radically, funding their own manufacturers for segments of generic supply.

The Chinese market comes into its own

China started the 2010s as the world’s third largest pharmaceutical market by value rank, moving to the second slot behind the US by 2019. However, on another vital metric the 2010s saw China remain stubbornly in the third division: on its contribution to the global sales of New Active Substance, the innovation driver for the global industry, China currently ranks not second, but 31st.

Once again, 2019 proved a tipping point: Chinese approvals of innovation have grown dramatically and some made global headlines: first the approval of a locally developed Alzheimer’s treatment, Oligomannate, from Shanghai-based Green Valley Pharmaceuticals. While this approval was met with scepticism on the data, and has yet to be submitted to the US FDA, the Chinese company BeiGene got its Lymphoma treatment, Brukinsa, approved in the US in November 2019.

Approvals are one thing, paying for these products another – the other reason to believe China has reached an inflection point on innovation uptake is the updated drug reimbursement list, including 70 new medicines announced as entering the list in November 2019, on top of 148 added in August 2019.

Diversification of the nature of pharmacotherapeutics, real impact of biosimilars, the rise of China as a global innovation driver, are all trends born in the 2010s which will see their true market-changing impact in the 2020s.

The rise of digital

William Gibson once said, “The future is already here – it’s just not very evenly distributed”, and that is certainly true of digital health systems. The advanced healthcare systems of the US, Europe and Japan vary significantly in their progress on digital infrastructure, and the largest health economies are not always the most advanced – one very comprehensive analysis of digital health systems covering European countries and Canada places Estonia and Canada as the most, and Germany and Poland as the least, advanced on a survey of 34 criteria for digital sophistication[3].

On certain measures, for example consumer and private healthcare provider adoption of digital services, emerging economies may outpace developed ones. In the 2020s, the healthcare systems of major emerging economies could leapfrog major European countries, maybe even the US, because of the absence of legacy systems to impede the development of digital infrastructure. When this happens, it could turbodrive the rebalancing of where healthcare innovation originates and is adopted.

“The 2020s should see increasing corporate competitiveness, with innovative growth opportunities spread across a much more diverse group of companies”

During the 2010s, IQVIA followed the share of Pharmaceutical industry healthcare professional engagement that was digital, and found that while Japan and the US raced ahead in terms of the volume of digital activity, Europe dawdled. This is changing fast, and that means the countries which currently account for over 86% of the first five years of New Active Substance sales are all very much digital for Healthcare professional engagement – significant, because we have found that in the seven lead country markets (US, top five Europe, Japan) the most commercially successful launches are also the ones with the highest levels of year 1 digital promotional activity[4].

Improving the sophistication of digital customer engagement will be one way in which artificial intelligence and machine learning (AI/ML) will serve to improve and enhance the current functions of pharmaceutical companies in the 2020s, applying dedicated machine learning and artificial intelligence to navigate the complex web of stakeholders relevant to today’s highly specialist launches and recommend best actions to the customer facing team engaging with them.

However, AI/ML’s use in pharmaceutical companies has the biggest potential for impact in the 2020s in the research and development space. Between 2012 and 2018, IQVIA’s analysis found R&D expenditure grew by 32%[5]. IQVIA’s Market Prognosis forecasts the absolute value expansion of the world’s Rx market value as being 25% in the next five years, and part of that value growth will be generic.

Continued expansion of R&D costs at a rate faster than market growth is not sustainable; R&D needs to become more cost effective. Even more difficult, it needs to do this whilst the nature of the products under development, and the clinical trials required for their development, becomes ever more complex.

Sophisticated products, either for rare diseases or very closely defined groups of patients within a disease, are the most challenging types of product to recruit for in clinical trials.

The R&D based companies which thrive in the 2020s will use AI/ML to optimise their use of the best data available to generate insight on patients and their journey and identify the candidates for trial effectively and rapidly.

One of the most powerful sources of patient insight data will be genomic data, as understanding of the genetic basis of diseases and the ability to treat genetically driven diseases with a range of gene-based therapies grows. IQVIA’s research has identified 171 current or planned genomics/BioBank initiatives around the world – the 2020s will see the quantity and quality of genomics data generated by these initiatives explode, and with that, the potential for powerful medical research.

Genomics will be one of the sources of increasingly sophisticated real-world evidence, which again, although developing steadily during the 2010s, will see new relevance and power during the 2020s. For certain therapy areas, including rare diseases and oncology, both the FDA and the EMA have shown an increasing willingness to approve medicines with significant clinical potential on less mature trial data, including, in some cases, single arm trials, and earlier phase trials.

Simultaneously, at least some of the medicines being approved offer the potential for far longer term, possibly even curative, benefits – outcomes which will not be fully demonstrable within the confines of pivotal clinical trials. Payers are, unsurprisingly, concerned by the prospect of high cost medicines with promising but immature data, and will increasingly demand the data gap be filled with post-approval real-world data studies to reassure themselves that they are funding medicines that will deliver on the promise.

This necessity-based driver for greater real-world data activity accompanies an opportunity based one – IQVIA research shows that, in very competitive therapy areas, a higher level of RWE productivity, as measured by the number of RWE publications associated with a medicine benchmarked to length of time on market and approved indications, is associated with superior commercial success.

The global top 20 of Pharma companies saw major rearrangement in 2019, with three major acquisitions which, if they all go through as planned, offer a new number one by pharma sales (Abbvie/Allergan), a much leaner, specialty-focused Pfizer divested of its mature Upjohn products, sold to Mylan, and a new giant in oncology (BMS/Celgene).

The increasingly speciality focused launch environment of the 2010s also facilitated the rise of smaller biotech companies developing and launching their own assets. IQVIA predicts the 2020s will be the decade in which mid-sized pharma, especially those based in Europe, move to the next level.

These well-established companies, including among them some of the oldest pharmaceutical companies in the world, often languished during the 2010s doe to a combination of focus on low-growth regional markets and a legacy portfolio of primary care, largely un-innovative products.

Finally, these companies are on the move: in the case of Almirall, succeeding in the US with one of the major launches of 2019, the dermatological Seysara, in the case of Lundbeck and LEO making acquisitions to enter the biologics spaces within their areas of therapeutic expertise, and for Ipsen moving beyond France with ambitious growth targets. The 2020s should see increasing corporate competitiveness, with innovative growth opportunities spread across a much more diverse group of companies.

Associating decades with a single theme is perhaps simplistic for an industry as complex and multi-faceted as Pharma, but if there were one theme for the 2010s it would have been “specialty” – its rise as the key driver of value growth, the source of the majority of innovative launch, and the increasing focus of the world’s research based pharmaceutical companies.

What’s the theme of the 2020? If I were to summarise into a single word, I would say it is “diversity” – increasingly diverse launches in terms of their nature (small molecule, biologic, cell therapy, gene therapy, digital therapy), increasing geographic diversity in terms of sources of innovation and also, perhaps, where they realise their commercial opportunity, and increasingly diverse companies, top 20 pharma, Biotech, and mid-sized players. All in all, the 2020s look to be an exciting ride for pharma.

[1] The Changing Landscape of Research and Development – Innovation, Drives of Change, and Evolution of Clinical Trial Productivity ~ Report by the IQVIA Institute for Human Data Science

[2] First approval of a gene therapy by the EMA/FDA- there had been an earlier gene therapy approved in China but not approved elsewhere.

[5] The Changing Landscape of Research and Development – Innovation, Drives of Change, and Evolution of Clinical Trial Productivity ~ Report by the IQVIA Institute for Human Data Science