IQVIA’s Sarah Rickwood and Markus Gores look at how to deliver consistent launch performance in an increasingly complex world.

It is precisely this complexity that makes it hard to achieve consistency in launch performance and why fewer than 10% of all launches achieve excellence across more than one country.

We found there are wide variations in the local performance across countries for even launches judged commercially excellent by IQVIA criteria based on our audit sales data (see figure 1). If the typical excellent launch narrowed its performance variance by bringing underperforming countries in line with its average market share, this would equate to a 15-20% increase in expected lifetime sales.

Performance variance is widening over time for all launches, excellent and non-excellent, a reflection of an increasingly complex and challenging launch environment. 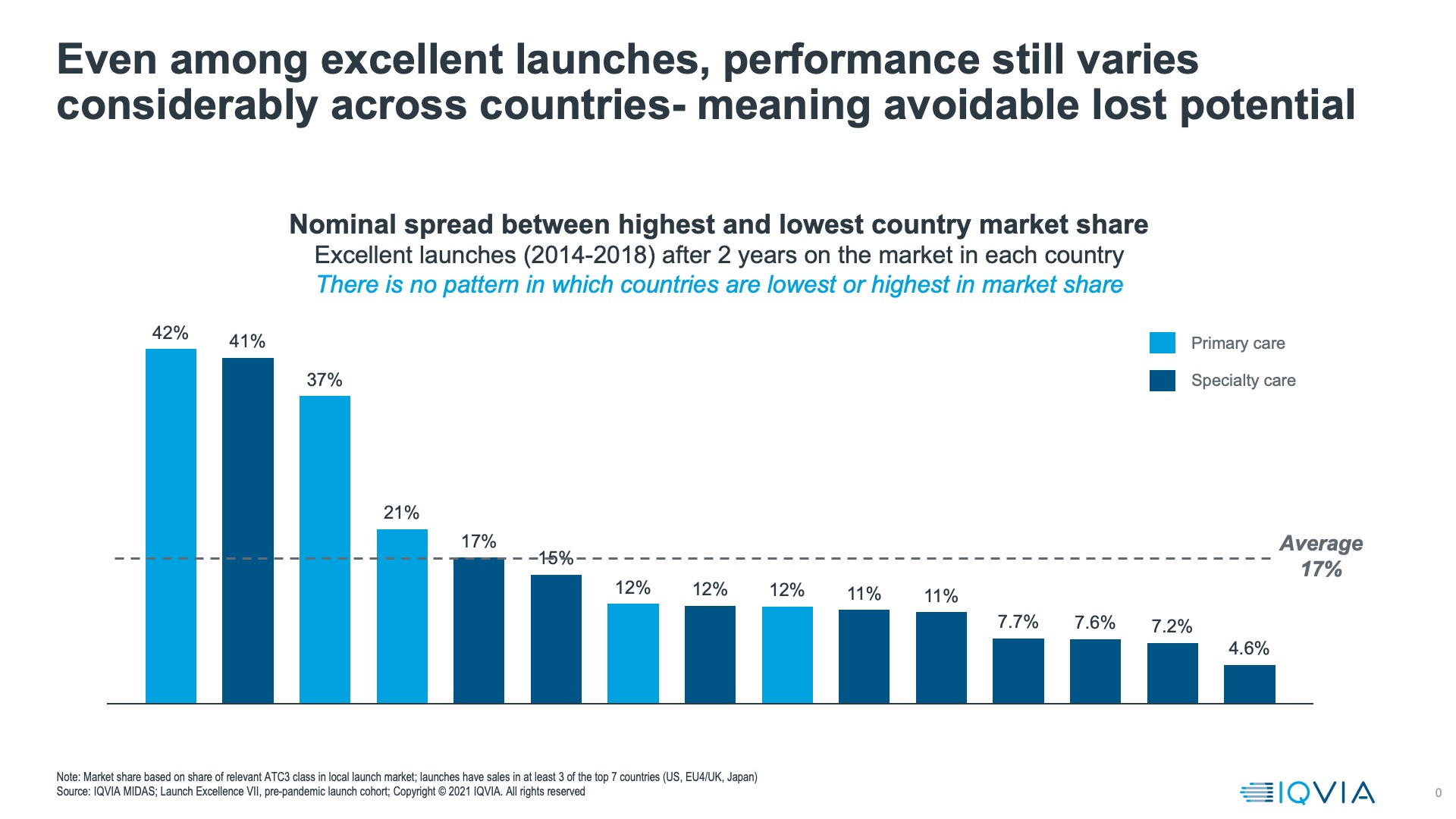 Handling multiple launches simultaneously compounds the complex challenges encountered by individual launches. This results in an inverse relationship between the number of a company’s launches in a given time period and the proportion of those being excellent: the more a company launches, the lower its share of excellent launches, implying that greater complexity of handling multiple launches more than offsets any benefits from shared organisational learnings or greater launch experience.

A more refined analysis shows that companies segment into three ‘proficiency tiers’ which reflect their ability to handle multiple launches, with some companies clearly adapting much better to the complexity challenge (see figure 2). 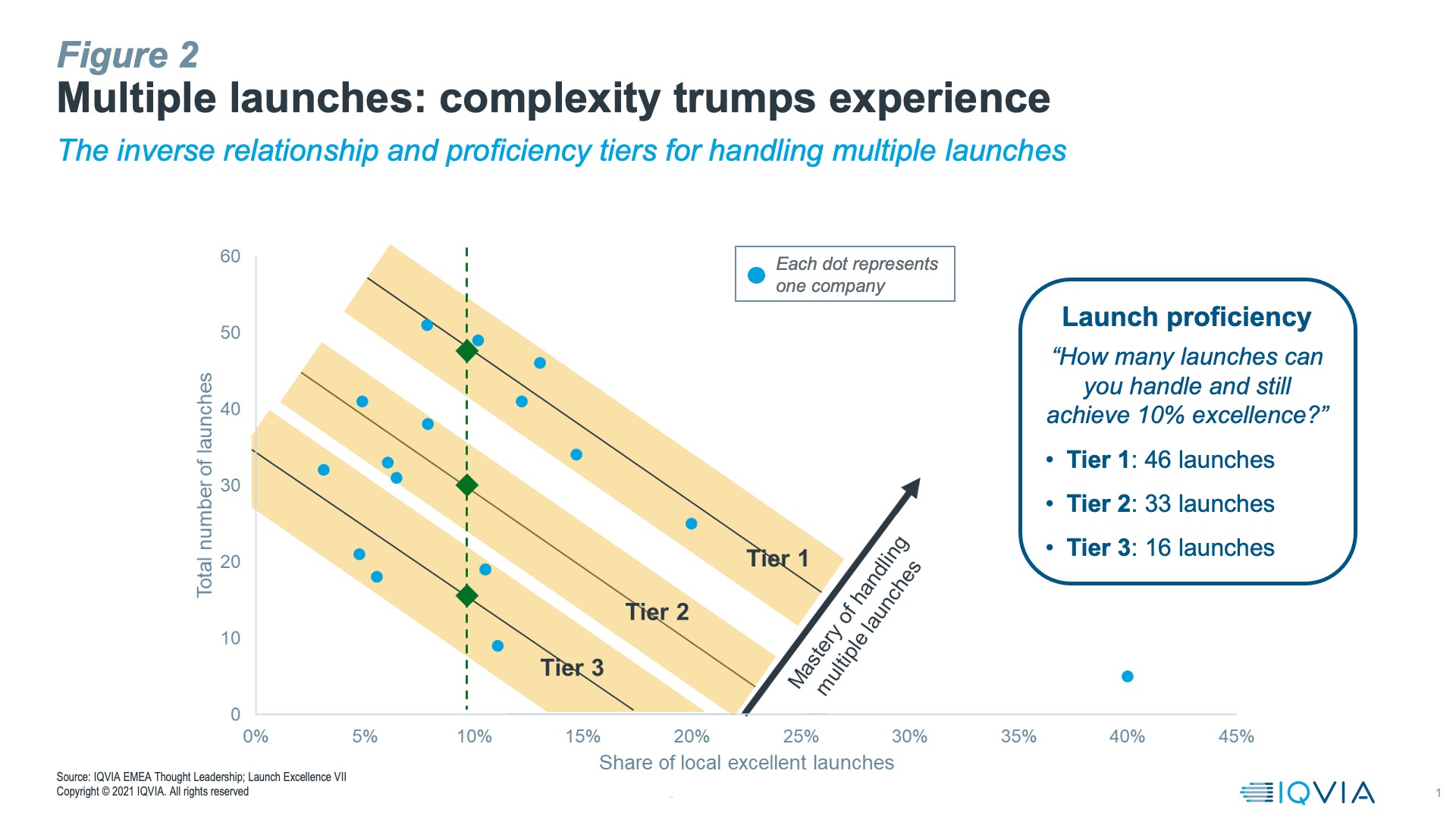 Mastery of handling multiple launches will be critical in the future, as companies will have to launch more often: (i) The average number of launches p.a. for top 20 companies has tripled over the past decade; (ii) Launches are becoming smaller in sales achievement, with pre-pandemic median 2-year sales declining from $148m to $89m over the past five years; (iii) More revenue needs to be replaced, thus requiring more launches, due to greater, absolute LoE exposure for 2020-25: $52 billion for biologics vs. $15 billion for 2015-20; $114 billion for small molecules vs. $98 billion for 2015-20.

To ensure high-quality execution of the myriad of launch tasks and to sustain organisational focus in the face of increasing complexity, companies need to focus on three areas:

Ways of working: Institutionalised formal processes, eg systematic launch archetyping, a launch playbook, form the backbone for minimising performance variability. These need to be applied alongside proactive launch management, with a focus on predictors of launch success.

Structure and governance: Establishing a temporary ‘launch BU’, with dedicated resources and P&L, can serve as a structural vehicle to force focus. This would be set up for the duration of a launch, starting around two years pre-launch when local market-shaping activities typically take off.

Resource ownership: An outsourcing model can provide an effective route to a lean, more focused and nimbler organisation. It benefits from access to best-in-class infrastructure and cutting-edge capabilities while enabling resource flexibility and agility.

Escaping the complexity trap will become vitally important for companies to achieve Launch Excellence in future and to realise the full potential of their pipeline assets.

US meds spending spiked last year, but will fall quickly

Medical Informatics and Rare Disease: a bridge between two worlds

How to win at omnichannel