Further progress towards the development of a 'universal vaccine' to treat all strains of influenza has been made by Janssen and The Scripps Research Institute (TSRI).

The partnership between the pharma company's vaccine researchers in Leiden, the Netherlands and TSRI in La Jolla, California has now proven a method of inducing antibodies to fight a wide range of influenza subtypes in animal studies. 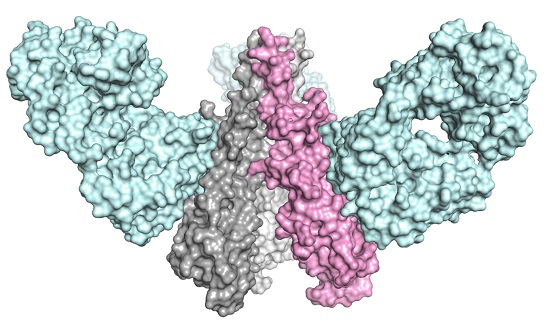 The team from The Scripps Research Institute and Janssen Pharmaceutical Companies designed a molecule that mimicked the shape of a key part of the influenza virus, inducing a powerful and broadly effective immune response in animal models.

Image courtesy of the Wilson lab, The Scripps Research Institute.

"This study shows that we're moving in the right direction for a universal flu vaccine," said Ian Wilson, Hansen Professor of Structural Biology and chair of the Department of Integrative Structural and Computational Biology at TSRI.

The research was published online ahead of print on 24 August by the journal Science.

The partners say this could one day eliminate the need for repeated seasonal flu vaccinations. These are currently required because continuous mutation of the flu virus means new vaccines must be tailored to target new strains.

The World Health Organisation says seasonal flu causes 3-5 million cases of severe illness and between 250,000 and 500,000 deaths every year, with the elderly and under-5s most vulnerable.

While a yearly flu jab provides some protection, subtypes not covered by the vaccine can emerge rapidly. A stark example of this came in 2009, with the emergence of the H1N1 'swine flu' subtype that killed an estimated 151,700 to 575,400 people worldwide.

A protein on the surface of influenza, called hemagglutinin (HA) is well known to researchers in the field as the 'Achilles heel' of the virus.

HA is present on all subtypes of influenza, providing the key viral 'machinery' that enables the virus to enter cells. Most importantly, the long 'stem' region of HA, which connects the virus to cells, plays such a crucial role that mutations at the site are unlikely to be passed on.

"If the body can make an immune response against the HA stem, it's difficult for the virus to escape," Wilson explained.

The research team has now shown the mechanism works in rodent and non-human primate models given one of several candidate immunogens. Animals given one especially stable immunogen produced antibodies that could bind with HAs in many influenza subtypes, even neutralizing H5N1 viruses ('avian' or 'bird' flu).

The next step in this research is to see if the immunogen can do the same in humans.

"While there is more work to be done, the ultimate goal, of course, would be to create a life-long vaccine," Wilson said.

Other research teams are working on universal flu vaccinations, with a variety of approaches. The US FDA is working with Okairos, a Swiss biotech firm acquired by GlaxoSmithKline in 2013, Merck is working with NanoBio on a nanoemulsion adjuvant technology, and a team at Mount Sinai Health System in New York said in January that its candidate could be just two years away from launch.