The head of the UK’s medicines regulator accompanied the Prime Minister’s delegation to Beijing this week, and signed a new memorandum of understanding (MoU) with Chinese counterparts.

Dr Ian Hudson, chief executive of the MHRA, signed the agreement with the China Food and Drug Administration (CFDA), which oversees regulation for the country’s 1.39 billion citizens.

The agreement pledges new areas of co-operation such as an exchange of learning from the UK’s Accelerated Access Review (AAR), the life science industry-focused strategy, and insights on how to regulate the trading of medicines online.

The visit to China was important for Prime Minister Theresa May, who wanted it to demonstrate the UK being globally minded and ‘open for business’ as it searches for a new post-Brexit identity.

This year will be hugely decisive regarding the terms of Brexit, which is set to begin with a two-year transition period in March 2019.

However massive uncertainty still hangs over the venture – not least in the UK life sciences sector, which is lobbying hard to stay as closely aligned with Europe’s EMA medicines regulator and other EU standards.

In the event of a ‘no deal’ or ‘hard’ Brexit, however, the MHRA may have to go it alone, and break away from the EMA’s centralised marketing authorisation.

The UK pharma and biotech sectors are certain this will mean the UK will be relegated in importance for product launches, with new medicines either launched later, or not at all, unless a deal with the EU can be struck.

There is speculation that the UK could align itself with other major regulatory blocs around the world, although the viability or desirability of these ideas has yet to be tested.

The MoU was signed in Beijing’s Great Hall of the People with both Prime Minister Theresa May and China’s Premier Li Keqiang present.

This new signing expands on a previous MoU signed in 2014 which focused on the exchange of safety information on medicines and medical devices to protect patients in the UK, China, and around the world. 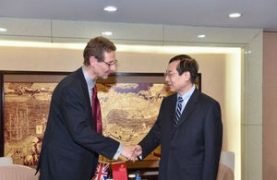 Dr Ian Hudson, chief executive at the MHRA said: “China is a world leader in the market for raw materials for the pharmaceutical industry and closer collaboration with MHRA will support the promotion of innovation, good practice, and protect UK patients.

“We operate in a global environment and formalising our international relationships helps strengthen regulatory systems to protect public health worldwide.”

The MoU is also of interest to China, as it is looking to rapidly bring its regulatory framework up to speed with Europe and the US.

It is also changing its clinical trial approval system to one similar to the US FDA’s Investigative New Drug (IND) process – a move which could eventually see a huge shift in global clinical trials into China.