After having filed its new prostate cancer drug apalutamide with the FDA in October, Johnson & Johnson have now submitted the drug to Europe’s EMA.

The drug is very significant for J&J’s pharma division, not least because a court recently overturned the US patent on current prostate cancer drug Zytiga.

This means that generics could hit the US market this year, though Zytiga will have market exclusivity in Europe a little longer, where it is set to have data exclusivity until 2021.

Zytiga’s revenues for 2017 rose almost 11% to just over $2.5 billion, and J&J will hope the new drug can help maintain its position in this key cancer market once approved.

The company hopes to gain approval for the drug in men who are already being treated with standard androgen deprivation therapy (ADT), but are no longer responding to it.

The aim is for the drug to be used at this stage and help delay the spread of the disease to other parts of the body – a setting for which there are currently no approved treatments in the US or Europe.

A recent estimate from analysts EP Vantage forecast the drug could earn around $1.4 billion by 2022.

The submission is based the pivotal SPARTAN phase 3 clinical trial, which assessed apalutamide versus placebo in men with nmCRPC who have a rapidly rising prostate specific antigen (PSA) level, despite ADT.

The trial showed a significantly decreased risk of distant metastasis or death (definition of the primary endpoint, metastasis free survival) by 72%, compared to placebo in combination with ADT and improved median metastasis-free survival (MFS) by over two years (difference of 24.3 months) in patients with nmCRPC whose PSA is rapidly rising. 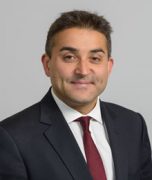 “The results of the SPARTAN trial are the first to show that metastases can be delayed in patients with castration-resistant prostate cancer, suggesting that apalutamide could become a new standard of care for patients with high-risk non-metastatic CRPC,” said Dr Simon Chowdhury, Consultant Medical Oncologist, Guy’s and St Thomas’ Hospitals, and a SPARTAN study investigator.

The combination also showed benefits across secondary endpoints, with statistically significant improvements in time to metastasis and progression-free survival compared to placebo.

Overall survival outcomes will of course be vital, but mature data is not yet available. Treatment with apalutamide cut the risk of symptomatic progression by 55% compared with placebo, and produced a 30% risk reduction of death compared to placebo at this early interim analysis for overall survival (OS).

While Pfizer’s Xtandi is currently J&J’s biggest challenger in the field, it is perhaps a soon-to-be- generic Zytiga and its growing evidence base which the new drug has to surpass.

In particular, the LATITUDE trial showed Zytiga cut death risk and extended PFS in newly diagnosed, high-risk patients who hadn’t yet been treated with ADT.