Failure to strike a Brexit deal allowing alignment with the European Medicines Agency would be ‘catastrophic’ for the UK life sciences sector.

That is the view of Sir John Bell, the eminent immunologist, geneticist and author of the new UK Life Sciences Industrial Strategy, which last week laid out the sector’s wishes for a long term sector strategy.

The government is expected to make its response to the report in the autumn. 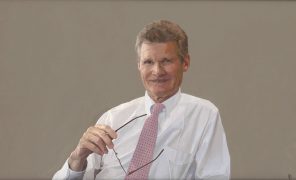 Speaking at a meeting hosted by pharma industry group EMIG, Sir John said the Life Science Industrial Strategy proposed by the government had never been trailed as a post-Brexit blueprint, but might nevertheless serve as “one way of stabilising” the UK sector after leaving the EU.

The report estimates that the life sciences sector is worth £64 billion a year for the UK, making it one of its most important industries, after financial services and alongside the automotive industry and aerospace.

Last week’s report was not led by the government, instead Bell worked with leaders from UK pharma, biotech and medical devices sectors, as well as charities to build a vision of how the advanced the sector could be in 20 years’ time.

He agreed with pharmaphorum that it amounts to an industry ‘wish list’ – but nevertheless believes that even if only some of the ambitious goals laid out in the strategy are backed by the government, if could still provide a major boost for the sector.

Bell told the EMIG meeting in London that given that it was the number one UK sector for investment in R&D, life sciences might be “the most obvious place for an industrial strategy,” adding that such a plan could “substantially add to the UK’s economic prospects.”

Among the key proposals is the creation of a Health Advanced Research Programme (HARP), which would be ambitious ‘moonshot’ programmes bringing together government and industry funding.

These would be ‘bigger bets with a higher risk profile,’ according to Sir John, but could make the UK a leader in fields such as gene-editing and cell therapy if these bets pay off.

A call to increase UK government spending on R&D from the current 1.4% of GDP to 2.6% is also central to the vision, which the sector believes could provide a big boost to early discovery and clinical trial work.

However life science leaders are undoubtedly concerned about the impact of Brexit.  For UK pharma companies, the devaluation of the pound has already cut the value of their businesses by around 15%, but many fear worse is to come if the UK exits Europe in March 2019 without a deal.

The UK’s chief negotiator, minister David Davis and his EU counterpart Michel Barnier are already engaged in a war of words, each accusing the other of holding up progress in the very time-limited talks.

This is stoking fears that there won’t be enough time – or political goodwill – to strike a deal allowing the UK to remain partially aligned with EMA decisions.

“The government knows very well that this is an essential bit [for the sector]…it would pretty much disable the life sciences sector in the UK if they didn’t have some alignment with the EMA,” said Bell.

He praised the UK regulator the MHRA for its expertise, saying it was currently responsible for a large share of the EMA’s workload, and suggested Europe would remain reliant on its input after Brexit.

Bell remained confident that a deal could be struck allowing the UK to piggyback on the EMA drug review process, with the MHRA continuing to participate in EMA scientific assessments.

Only at the final stage of approval would the UK split off, the UK government granting marketing authorisation rather than the European Commission.

This suggestion is very much UK pharma’s preferred option, and the same as the one set out in July, via a letter to the Financial Times from health secretary Jeremy Hunt and business secretary Greg Clark.

However this proposal seems very distant from the mood among politicians in the rest of Europe. That’s because it would represent a special status for the UK – or Europe ‘à la carte’ in the words of EU president Donald Tusk, something which the remaining EU27 have said cannot be allowed.

Disagreement on key issues and the process itself are already holding up the Brexit negotations, which means when decisions on future life sciences regulation will be made is unclear.  But time is running out, unless this is one of the matters which could be deferred into a Brexit transition period.

There is one exception to this: the European Council of ministers is set to decide in November where the EMA, currently based in London, should relocate to after Brexit.