When it comes to fighting a rare disease like Duchenne muscular dystrophy (DMD), it’s a matter of strength in numbers. 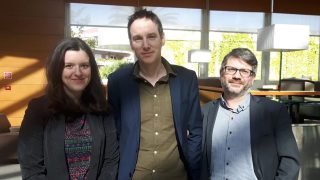 Three Duchenne experts talk to us about how international collaboration between patients, pharma, clinicians and regulators could accelerate access to drugs, trials and quality care.

Dr Paul Wexberg, of the Austrian Muscle Research Organisation, and John Gorman, of Duchenne Ireland, both have sons living with the condition. Réka Béndek is studying clinical psychology and is a volunteer at the Healing

Change is afoot for people living with Duchenne, as a pipeline of potential new treatments drives innovation and awareness.

In the UK, around 100 boys are born with Duchenne every year. Yet while DMD used to carry a life expectancy of the mid-20s, recent medical advances mean people are now living into their late 20s and even early 30s.

Access to these new drugs, however, is rarely plain sailing.  John, whose sons Lucas, 15, and Noah, 13, both have Duchenne, said the Irish health technology appraisal (HTA) body, the National Centre for Pharmacoeconomics (NCPE), had recently ruled an orphan drug for Duchenne was not cost effective.

He said: “At the moment there is a single HTA process for all drugs, there is no distinction between orphan and non-orphan drugs.

“Most Duchenne drugs are offering stability, it’s not the huge benefits you might get from cancer gene therapy.”

To tackle this issue, which affects rare diseases across the spectrum, Ireland is working on a new separate approach for orphan drug applications. The key to its success, John said, was early collaboration.

“If the pharmaceutical companies, patient organisations and HTA all agreed on standard disease and cost models on a non-competitive basis, every new drug would get through the process so much faster. You cut down the HTA cycle,” he added.

Paul, whose son Elias was diagnosed when he was four, said: “It’s very important to work internationally because the numbers of patients are so small.”

“This is even more evident when you look at the different forms of disease progression”, he went on.

“In Duchenne, there are so many different forms of development. My son has been in a wheelchair since he was 11, but John’s kids are still walking at 13 and 15. It’s important to have a patient cohort that is as big as possible so that you can form subgroups.

“In most countries, there is little opportunity to arrange large, single-centre trials. I think that the pharma industry should focus on an international multi-centre network to perform studies and to support patients who are participating,” added Paul.

Réka explained there were so few studies in her country that patients were not being given access to new treatments or models of care.

“In Hungary, there are not enough trials or research at all.  There are a few companies who are already doing some trials here, but it’s very limited,” she said.

In the past, studies have tended to carry strict exclusion criteria, creating a large, immovable barrier to participation. Things have started to change in recent years, and trials designed for people in wheelchairs, for example, are becoming more prevalent.

“The pharmaceutical industry has to engage the patient organisations early on, so they can say, ‘Look, this is an exclusionary trial, we really need to think about this again,’” said John.

They also agreed that access to quality care varied from country to country thanks to differing levels of expertise among healthcare professionals.

Réka said: “There are very few specialists who really understand this disease in Hungary, and (as people move) into adulthood, there are fewer and fewer specialists.”

To overcome this, the Healing Goodwill Foundation launched a fundraising campaign to build a muscular disease specialty centre. The team was, unfortunately, unable to secure the funding needed, so instead established a virtual muscular centre to link patients to knowledgeable doctors.

“It would be much better if we could have an actual building, if we could make connections with doctors, if we could get doctors to be interested in these diseases in the first place,” Réka added.

Duchenne Ireland has worked to adopt standards of care which are designed to help non-specialists understand how to manage the condition.

John said that sharing knowledge was an important way to improve care and that he hoped the standards would be adopted in other countries.

“The literature is there, and the standards are there, so clinical pathways can be cloned and adapted across borders,” he said.

“These things are not vastly expensive, it’s completely different to the drug development process or the HTA process which are like enormous boulders to move.”

It can be difficult in rare diseases like Duchenne to drive change – small patient numbers, expensive orphan drugs and a lack of medical experts can all serve to block innovations in treatments and care.

But by utilising its close ties, the small but global DMD community is working together to give boys born with Duchenne a future.