After five years writing the regular Pharma Gets Social column for pharmaphorum, Daniel Ghinn introduces his new series entitled “What doctors say about…”. In this series he will examine news and events through the eyes of doctors and other healthcare professionals as expressed in social media. He will consider what can be learned from their online conversations and share some insights and perspectives for the pharma industry.

On 12 January 2016 junior doctors in the UK went on strike following a dispute with the UK government over what the British Medical Association described as “junior doctors leaders’ concerns about contractual safeguards on safe working, and proper recognition for those working unsocial hours.” Daniel Ghinn investigates social media posts on this topic.

This was the first time that doctors had taken strike action for more than 40 years. The additional strikes that were planned for the coming weeks are currently on hold while negotiations continue.

As tens of thousands of junior doctors joined the strike, many of them and their healthcare professional (HCP) peers took to social media to share their feelings and experiences. At its peak on the day of the strike, healthcare professionals posted more than 1,000 tweets per hour and, during the week, more than 18,000 social media posts were published by junior and senior doctors, nurses and other HCPs talking about the action. 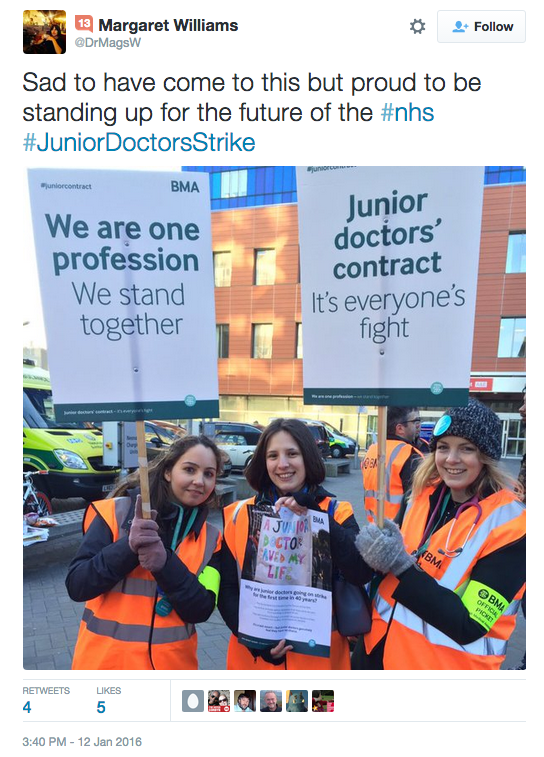 UK HCPs protective about the NHS

In their social media commentary on the junior doctors’ action, UK HCPs passionately defended the NHS, while attacking the government and, in particular, the Secretary of State for Health, Jeremy Hunt.

“Junior doctors are the backbone of the NHS and we have lost trust in the government,” wrote trauma and orthopaedic surgery registrar, Roshana Mehdian in a Huffington Post piece criticising Mr Hunt a few days before the strike.

In the aftermath of the strike, as the public arguments between junior doctors and the government escalated, direct criticism of Mr Hunt continued. “@Jeremy_Hunt I think an apology is due for your mendacious misrepresentation of mortality data,” tweeted Katharine Harding, a neurology registrar.

“I believe passionately in the NHS. I think it is the best health service in the world and I will not abandon it,” concluded an Emergency Medicine consultant based in the UK in a lengthy blog post supporting junior doctors’ strike action. Yet he was clear in his view that the UK government was to blame for the strike: “98% voting for strike action means there is no doubt the gov has got it terribly wrong… This government will go down in history as being the only one in over four decades to incite the medical profession to strike.”

Other HCP colleagues defended the NHS while supporting junior doctors’ action, too. “I love the NHS. This is a service worth fighting for”, wrote Rebecca, a nurse, in her blog post explaining why she backed the junior doctors’ strikes.

Two days after the strike, junior doctors angrily addressed political panellists on BBC television show Question Time. As the show aired, doctors took to social media to express their support. Psychiatrist Dr Lauren Gavaghan, who tweets at @Lollindialogue, was in the audience and was highly critical of government policy. Her comments were widely supported by colleagues online as she took part.

Some HCPs watching the show on television expressed their outrage at the views of panellists. “Ignorance and arrogance being shown about #JuniorDoctorsStrike by the #bbcqt panel tonight is frightening”, tweeted consultant radiologist, Jacky Davis.

The strike moved doctors all over the world

It was not only in the UK that HCPs talked about the junior doctors’ strike. In fact, almost one third of online conversation about it among HCPs took place outside the UK, as doctors all over the world responded with comments. Many were inspired by the action of their UK counterparts.

During the strike, Ket Sang Tai, an interventional radiologist in Malaysia, tweeted “You have my support #JuniorDoctorsStrike”. Meanwhile, UK junior doctor Ovi Roy shared a photo of doctors in India showing their support. 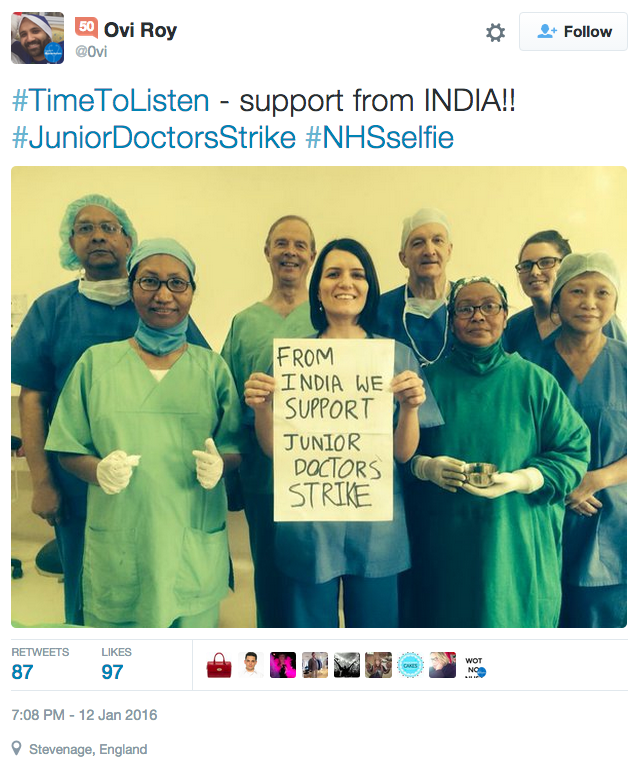 What can pharma learn from HCPs’ online response to the junior doctors’ strike? In my view, it is clear that HCPs in the UK care passionately about patients and the NHS, even in the face of this crisis. And the response via social media reflects a powerful sense of solidarity among HCPs around the world. The global community of HCPs on social media is a powerful force for common good, and we may yet see this community rise up to collaborate on other big issues.

There are already conversations developing around topics such as drug pricing and antimicrobial resistance. But those are stories for another day.

“What doctors say about…” is a monthly column written by Daniel Ghinn exclusively for pharmaphorum, featuring insights developed using Creation Pinpoint to listen to the voices of HCPs on public social media. If there’s a topic you would like to see explored in this column, email Daniel at daniel.ghinn@creationhealthcare.com.

Daniel Ghinn is founder and CEO of Creation Healthcare, a company that analyses what HCPs say online to provide market research insights to pharma and healthcare companies. He tweets at @EngagementStrat.