Cancer medicine: a scientific dream turns into an economic nightmare

Drug companies have few friends left. Perceived like the banks as evil symbols of corporate greed, they are increasingly portrayed as the bad guys in the saga of high cost novel cancer drugs. This seems a little unfair as without the huge and often risky investment required no drug would ever get to market.

The recent incredible discoveries in genetics, signal transduction, cell interaction and immunology have heralded a mechanistic approach to cancer drug discovery. The large scale screening approach which gave us a remarkable generation of cytotoxics such as taxol, doxorubicin, platinum and vincristine has given way to a far more intellectually satisfying approach of a new generation of targeted molecular therapeutics. But their costs to the patient and insurers have escalated beyond belief 1. Sure, research is expensive and it’s true that drugs make up less than 10% of the cancer budget. But we have seen the monthly cost of a box of cancer pills escalate from a few pounds to over £8,000 over a decade.

“…we have seen the monthly cost of a box of cancer pills escalate from a few pounds to over £8,000 over a decade.”

As Western governments and insurers struggle to control runaway healthcare budgets caused both by escalating costs of technology and their aging but demanding populations, the hunt is on for scapegoats. In a sound-bite dominated world who better to go for but the junketing high flyers of pharma with their private jets and Armani suits to deflect the public’s anger. Yet clever marketing strategies with crisp three symbol trade names bought for millions of dollars from leading New York advertising agencies create an image of success and stimulate demand.

Personalised medicine is here to stay for cancer. The problem is that at the moment its fragmented. Truly useful molecular response predictors are only available for a few of our expensive therapeutics such as herceptin, crizotinib, imatinib, vemurafinib and rituximab. For others some hints can be obtained from markers such as Kras mutation or hormonal receptor expression but these are not absolute 2. But for most, including some of the biggest blockbusters there are simply no predictive biomarkers available for patient selection.

As we get better at making predictions we should be able to reduce costs by only giving the right drug to the right patient but we’re not there yet. Perhaps the biggest problem affecting payers is the poor efficacy of many of the new compounds, however clever their mechanistic basis. Why should society be expected to pay £70,000 for an elderly man with prostate cancer to survive for another three months? Or a similar price for a young woman with breast cancer to take sixth line chemotherapy for only a few weeks extra of life.

The high prices of new cancer drugs represent a moral blackmail on society. If we don’t pay for them through tax or insurance we are seen as a hard, heartless society with no compassion forcing cancer victims to sell their homes and cars to raise the necessary cash. But there’s plenty more in the pipeline so the problems will only escalate (Table 1). It’s true, some of the blockbusters will soon be generic: rituximab (2014); imatinib (2015); bevacizumab (2018) and erlotinib (2020) but the savings will soon be gobbled up by the price of the new.

The politics are complex. No elected official wants to be seen denying cancer patients life-saving medication. And industry has been great at hyping the value of many of its products egged on by publicity hungry cancer charities keen to get donations. Somehow the meagre survival benefit never seems to appear in the adverts or press releases of either.

“Why should society be expected to pay £70,000 for an elderly man with prostate cancer to survive for another three months?”

In the UK several confusing processes have emerged all aimed at distancing politicians from individual patients. These include the use of neutral health technology assessments through NICE; the creation of a National Cancer Drugs Fund 3 with its own approved list separate to that of NICE; a complicated innovative medicines access scheme and a plethora of supposedly value-based schemes that include free treatment to ascertain if a patient responds, a yearly maximum price for a single patient, cash back after purchase, single lifetime purchase and price equalisation to existing therapies. If only we used the same imagination in drug discovery as in developing novel marketing strategies we probably would have far higher tumour response rates.

These new drugs will probably never cure cancer for most people. They will just add a small benefit to some patients but we can’t always predict who. In metastatic cancer we are operating too far along the therapeutic plateau. Generally the more we spend on healthcare the better the outcome. But for every disease we reach a horizontal limit – spending more money gives little real gain. But to know there is something out there we can’t have that just might make a difference is psychologically very damaging for cancer patients and their families 4. And the cancer market and its prices are dominated by one country – the USA – home to 4.8 percent of the world’s population yet consuming over 70 percent of its cancer drugs in dollar terms.

To make matters worse we don’t have good data on the true value of new compounds versus cheaper available treatments simply because it’s too expensive to do the relevant trials to show non-inferiority. It’s just not in the interest of the manufacturer to do such comparisons or to provide the new drug freely for such studies. The economics are a true nightmare. If we assume that each patient with metastatic cancer – about 100,000 a year in the UK – needs novel drugs with an average cost including IV administration and side effect management of £100,000 then the total addition to the NHS budget is £10bn. Such a dramatic hike is simply not justifiable.

So cancer drug rationing is inevitable in all health economies – rich and poor alike. My solution is to have age limits for expensive therapies. Oncologists have been doing this covertly for the last two decades – it’s now time to be explicit. This seems only fair when the value of giving £100,000 of cancer drug is going to have a much greater potential benefit in someone whose life expectancy is 40 years rather than five. But is that knock on the door the NHS thought police summoning me for corrective therapy? 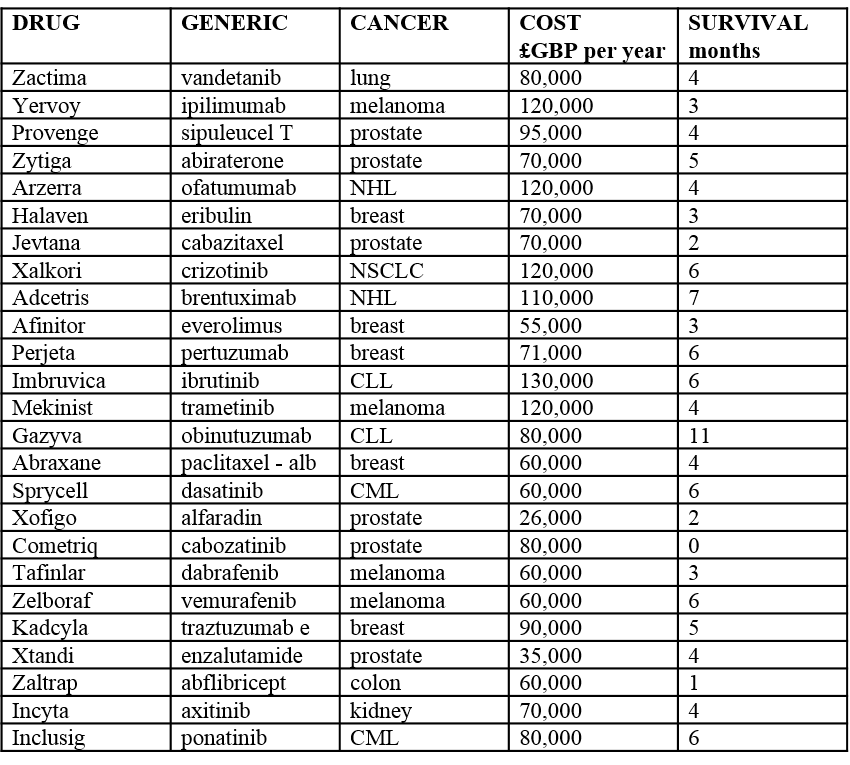 Karol Sikora is Medical Director of Cancer Partners UK a group creating the largest independent UK cancer network. He is also Dean at the University of Buckingham Medical School.

Have your say: When will personalised medicine become less fragmented?